The Bolder Traits of Mowgli: Legend of the Jungle Can't Overcome Its More Tired Tendencies 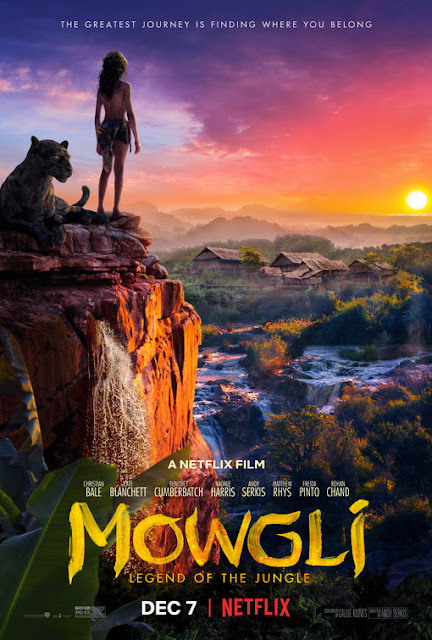 Andy Serkis may have not planned to fixate his entire career around motion-capture performances but after portraying acclaimed characters like Gollum, Caesar and the 2005 version of King Kong, he's embraced it, to the point that not only has he founded a studio dedicated to this artform but his second directorial effort (following the dreadful biopic drama Breathe) is primarily centered around characters brought to life by the motion-capture process. What project would call for so many characters of this nature? Why, a new big-screen adaptation of Rudyard Kipling's The Jungle Book of course, though this time around it's called Mowgli: Legend of the Jungle as an obvious homage to the classic fantasy adventure King Arthur: Legend of the Sword.


The typical beats of The Jungle Book that we all know show up once again in Mowgli: Legend of the Jungle. Mowgli (Rohan Chand) is found as a baby by the panther Bagheera (Christian Bale) and is taken to live with a pack of wolves who protect the Man-Cub from the clutches of the nefarious tiger Shere Khan (Benedict Cumberbatch). As Mowgli grows up, Bagheera insists he must return to the man-village so that he can be properly protected, but Mowgli wants to stay in the jungle. The broad set-up is the same but there are a number of deviations to be found here from the famous adaptations of Kipling's book, most notably Mowgli's extended stay in the man-village that sees him becoming a kind of protege to Rudyard Kipling's father, John Lockwood (Matthew Rhys).

Mowgli: Legend of the Jungle intends to also separate itself from prior film adaptations of its source material by adopting a darker tone to accompany its character-centric focus. This movie is all about Mowgli's personal struggles to feel accepted in either the wolf pack or the world of man and such a struggle is filtered through a somber lens that does lend gravity to Mowgli's situation. His adolescent angst over being different is well-realized, particularly through Rohan Chand's sterling performance, and it's nice that a movie that kids will likely end up watching shows that it's totally normal for youngsters to feel extreme levels of frustration at feeling like an outcast. A pity that such bold traits in this character are accompanied by more rote details like Mowgli being a Chosen One figure destined to lead the animals against those who would harm the jungle.

The kind of slapdash writing that informs that aspect of Mowgli's character is, unfortunately, also what ensures that the majority of the supporting characters are written to be broad caricatures that don't feel like they belong in a movie this gravely serious. Shere Khan, for instance, has only one personality trait consisting of him growling about how much he wants to drink the blood of man, which feels like a waste of the talents of Benedict Cumberbatch while the wolves that pick on Mowgli for being different have all the dimensions of a schoolyard bully from a Disney Channel Original Movie. The tone of this movie is occasionally interesting, particularly when it's trying to do things that are actually fresh, but by and large, the thinly-sketched characters just don't feel like they fit into it.

These jungle characters are brought to life through motion-capture animation that manages to underwhelm, a shock given how groundbreaking motion-capture works that Serkis has been involved in in the past were. Bagheera, Baloo, and the other animals occupy a strange realm between the realistic and the stylized in their appearance, the fact that you can see Christian Bale peeking out of Bagheera's face is downright eerie rather than impressive. The interactions between the CGI characters and the live-action lead are usually pretty seamless in execution, but the look of these animals really detracts from the ambition of the project as well as strong vocal performances from the likes of Christian Bale (he really works well as a mentor-like figure) and Naomie Harris.

Mowgli's time spent in the man-village may leave us with no visually perturbing animals to look at but it still may be the weakest section of the script by Callie Kloves. This part of the story entails Mowgli going from being locked in a cage to declaring to one of his wolf brethren that the man-village "is my home now" in the span of a three-minute montage. Give us a little more time to see Mowgli gradually fit into the village, maybe it would let us get to know why Mowgli feels like this is his home now. Even if it didn't make one fully get Mowgli's motivation for sticking with the man village, at least it would give Frieda Pinto (who plays a woman who cares for Mowgli) something to do since she's barely in the film at all for some reason.

Kloves writing here is erratic in terms of how well its omnipresent bleak tone actually fits with on-screen actions with scenes like a surprisingly vicious Baloo/Bagheera fight feeling goofy when done with a grimly serious tone. On the other hand, the script has a decent structure to it, it actually has a number of solid bits of build-up & pay-off and the climax is extremely entertaining mainly because things get extremely outlandish as Mowgli begins to fight Shere Khan mano-a-tiger and John Lockwood's storyline gets an immensely cathartic conclusion. That's probably the one real stand-out extended stretch of Mowgli: Legend of the Jungle but it's not the only noteworthy individual element here with its other positive attributes usually being similarly weird aspects reimagining Kaa the snake (here played by Cate Blanchett) as someone who can see the past and future. Both director Andy Serkis and writer Callie Klove have enough of a grand vision for this project that it results in some admirably bold details that make this stand above other recent grim n' dark takes on classic pieces of literature like those recent Tarzan and King Arthur movies. Alas, a grand vision can only take you so far and the execution of Mowgli: King of the Jungle leaves much to be desired.
Posted by Douglas Laman (NerdInTheBasement) at 11:05 AM