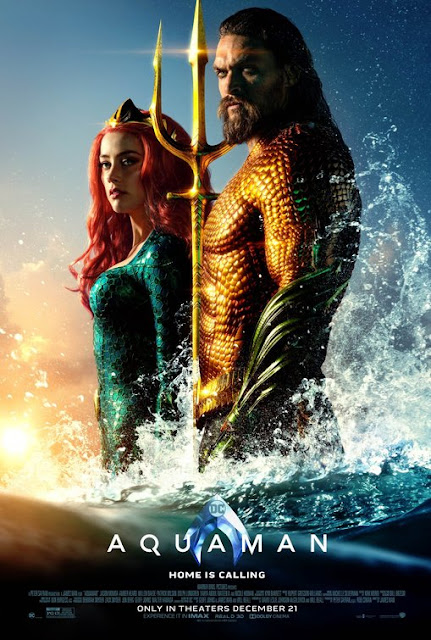 Aquaman has been given a bum rap in American pop culture. Because Family Guy and The Big Bang Theory (the paragons of pop culture contemplation) made jokes saying Aquaman was stupid, that's been his reputation in the 21st-century pop culture landscape, which is a pity because of how much fun the character can be in properties like his "Outrageous!" portrayal in Batman: The Brave and the Bold. Much to my delight, James Wan's Aquaman movie decides to eschew constantly apologizing for the weirdness of the character and his world and just embraces all the high-concept underwater absurdity that Aquaman could possibly get into, a choice worthy of a mighty Jason Momoa delivered "YEAH!".

Aquaman, or as he's more routinely called, Arthur Curry (Jason Momoa), is living out his days drinking heavily with his human father and occasionally rescuing people in ocean-based catastrophes. Arthur is the offspring of a human lighthouse keeper and Atlanna (Nicole Kidman), the Queen of the underwater kingdom of Atlantis, a unique heritage that makes him feel like he doesn't belong to either the world of the land or the world of Atlantis. Mera (Amber Heard), a member of Atlantis royalty, says that Aquaman must help her in saving both of these worlds from Arthur's half-brother King Orm (Patrick Wilson), who wants to unite the various underwater kingdoms of Atlantis to wage war on the human world.

To stop this impending war, Arthur and Mera head off on a quest to retrieve an important ancient trident, an adventure whose level of entertainment is directly connected to just how absurd the story gets. The more gloriously outlandish Aquaman becomes, the more fun it is to watch. Anyone expecting this to be a grounded version of a character who speaks to fish will be sorely disappointed before the opening prologue is finished. Aquaman dives right in (no pun intended) to the waters of the preposterous and excels the more it relishes being in such terrain. People ride around on seahorses and sharks without as much as a wink to the camera while all the visual possibilities of setting an elaborate fantasy/science-fiction kingdom underwater get utilized in the cinematography and costume design.

If nothing else, Aquaman is a visual feast for the eyes, so many wide shots convey the majesty of Atlantis in images that would be perfect for a classic rock album cover (that's a compliment!) while the denizens of this underwater realm, namely Mera and Black Manta, get to walk around in outfits that feel like they couldn't have come from another movie. Aquaman is confident as heck in its own visual sensibilities, this is not a movie running from the fact that its lead character lives in an underwater kingdom. This extends to the action sequences, which similarly show some imagination in utilizing elements of the underwater world across different types of fight scenes. We get a gladiator fight, a foot-chase scene from the Bourne movies and a climax that starts out as a Lord of the Rings battle scene pastiche before turning into a Kaiju battle and then once again turning into a riff on the elevator scene from Cabin in the Woods, all done while clearly keeping in mind that the lead character comes from an underwater kingdom.

Unfortunately, David Leslie Johnson-McGoldrick and Will Beall's script that soars so well on goofy spectacle tends to sputter when it comes time for anything character-based, particularly anything involving dynamics between characters. Our primary hero and villain, Aquaman and Ocean Master, don't have much of an interesting chemistry to speak of in their conflict with one another mainly because Ocean Master is painted as a more generic kind of supervillain. Portions of the plot that try to sell down-to-Earth banter between Aquaman and Mera as they search for a mystical trident similarly don't work all that well, mostly because they don't play to Momoa's limited talents as a performer. Momoa works quite well as an intimidating physical force and he sells his characters crucial climactic monologue, but he's really not adept at witty back-and-forth banter that's supposed to subtly convey potential romance.

The lack of really interesting characters in the script doesn't give much of substance for the supporting actors to do, though underutilized performers Willem Dafoe and Patrick Wilson both give each and every one of their lines as bombastic of readings as possible. Amber Heard and Yahya Abdul-Mateen II easily give the best performances of the production, they've got a lot of personalities and even some actual humanity in their performances here. As said earlier, Jason Momoa doesn't have much range as an actor and he's got plenty of clunky line deliveries but rewriting the character from his abrasive musclehead Justice League personality into someone who's more of a well-meaning dude who tends to be too reliant on violence actually serves Momoa well, he seems way more comfortable portraying this version of Aquaman rather than the "edgy" individual he was tasked with playing in last year's DC Extended Universe debacle.

Characters are not Aquaman's strong suit but gorgeously realized yet thoroughly absurd imagery is and it's got just enough of that kind of imagery to make it a fun time at the movie theater. Aquaman doesn't come close to the likes of Black Panther, Spider-Man 2 or Wonder Woman, but it did remind me of G.I. Joe: The Rise of Cobra, a movie I actually enjoyed, in how it's a silly movie that thoroughly revels in being silly. Aquaman gets even more grandiose and ridiculous, and therefore more fun, than that 2009 Stephen Sommers movie, so take this Ocean Man by the hand and let him take you to the land (that you understaaaand) if you're in the mood for a goofball two hours at the movie theater. Just remember to grit your teeth and bear it through the subpar dialogue every time the movie slows down to focus on characters who work better as things for giant creatures to chase rather than as dramatically compelling individuals.
Posted by Douglas Laman (NerdInTheBasement) at 9:51 PM