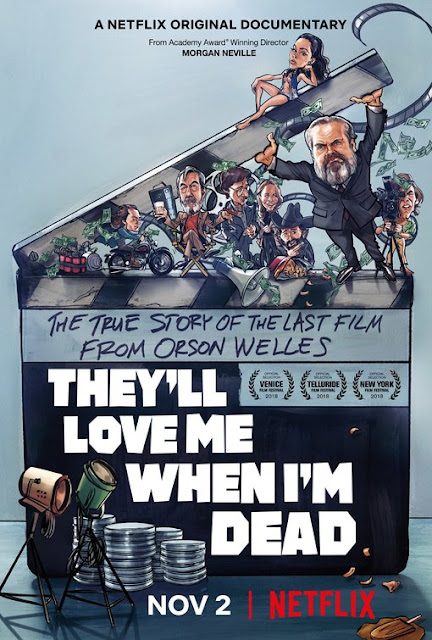 The saga of filming The Other Side of the Wind for years on end is a fascinating story in and of itself, there's more than enough material in that saga to fill up a whole documentary or two. But though They'll Love Me When I'm Dead primarily concerns itself with the multi-year process of filming this motion picture, it uses that tale as a springboard for a larger exploration of the career of Orson Welles, which kicked off with a bang with Citizen Kane but spiraled into endless creative difficulties as he struggled to work with studio executives who hindered or outright ignored his work. Welles is a mythic figure of cinema in the modern age just as he was for many young directors at the start of the 1970s, but his career was rife with difficulty that gets explored throughout They'll Love Me When I'm Dead.

Directing this particular documentary is Morgan Neville, the filmmaker behind one of 2018's best features, Won't You Be My Neighbor? Neville is now two-for-two in my book with quality 2018 documentaries considering how good They'll Love Me When I'm Dead is. Much as he did with just letting a number of Mister Rogers Neighborhood speak for themselves in his other acclaimed documentary from earlier this year, Neville knows when just behind-the-scenes footage from The Other Side of the Wind will suffice in getting across certain ideas to the viewer or in just providing entertainment. I'm glad Neville understands how rich this material is because I could watch off-the-cuff footage of Rich Little on the set of The Other Side of the Wind all the live long day!

Now, being a fellow who loves to read tales about behind-the-scenes activities that make human beings out of cinema icons, certainly They'll Love Me When I'm Dead and its focus on the chaos that unfolded when Orson Welles tried to make his big comeback motion picture was starting off on the right foot with me. But it isn't just that element that won me over here, it's also the unexpectedly profound exploration of what makes Orson Welles tick that fascinated me so. Darting back-and-forth between interviews with numerous people that interacted with Welles, numerous differing portraits of the main emerge, with the one common element always being that Welles drove his workers well beyond their breaking point with his demands.

The level of variety in terms of how Orson Welles came off to individual people shows a complex man that both Hollywood and moviegoers, in general, tended to pigeonhole as just "that Citizen Kane guy". Welles was a man whose career frustrated him so as well as a person capable of both being an overbearing monster and someone suffering from a tragic desire to be accepted by those who rejected him. They'll Love Me When I'm Dead covers the wide terrain of who Orson Welles was a man and such an expansive individual provides so much great material for the feature to cover, especially in the interview segments where the likes of Peter Bogdanovich recounts encounters, both pleasant and abrasive, they had with Welles.

Also scattered throughout the movie are a number of pieces of dialogue that help illuminate which real-life figures the characters in The Other Side of the Wind are supposed to be stand-ins for. A film already jam-packed with fascinating subtext suddenly gets whole new layers of real-life resonance before one's eyes while the entire film is accompanied with clever uses of existing Orson Welles-centric footage, the most inventive of which is a perfectly timed use of the Orson Welles cameo from The Muppet Movie, accompany the interview segments. Both the life of Orson Welles and the production of The Other Side of the Wind seem like prime fodder for documentary material, so while it's no surprise to see They'll Love Me When I'm Dead turn out to be a well-done movie, the feature still impresses with its ability to cover so much different material related to Welles in a cohesive fashion.
Posted by Douglas Laman (NerdInTheBasement) at 1:47 PM

Email ThisBlogThis!Share to TwitterShare to FacebookShare to Pinterest
Labels: 2018, December 2018, Documentary, Morgan Neville, Movie Review, Orson Welles, The Other Side of the Wind, They'll Love Me When I'm Dead, Won't You Be My Neighbor