Spider-Man: Into The Spider-Verse Launches Holiday Season Box Office In Style While The Mule Has Solid Bow And Mortal Engines Falls Into A Ditch 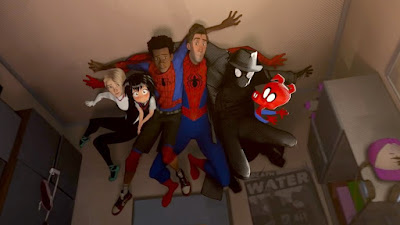 Though December is known for its financially successful family movies, it's typically not a place where animated family movies go for box office glory. Normally, December is where live-action family movies (most notably 2000's 20th Century Fox fare like Night At The Museum, Alvin and the Chipmunks and Cheaper By The Dozen) shine. Meanwhile, the only three animated movies to open in December and crack the $100 million mark domestically are Sing ($270.3 million), The Princess and the Frog ($104.4 million) and The Prince of Egypt ($101.4 million). But as the massive box office haul of sing indicates, just because animated movies haven't found much box office glory in December in the past doesn't mean they can't ever find box office glory at this time of the year and now the solid opening of Spider-Man: Into The Spider-Verse proved once again how capable animated family movies are at opening to big numbers in December.

This animated title opened to $35.4 million, narrowly edging out the $35.2 million bow of Sing to claim the title for the biggest opening weekend ever for an animated movie that debuted in December. That also makes it the fifth biggest opening weekend ever for a Sony Pictures Animation title (behind the trio of Hotel Transylvania movies and the original Smurfs film from 2011) and the twenty-sixth biggest opening weekend ever in December. I'm sure Sony would have hoped the combination of animation, Spider-Man and some of the best word-of-mouth of the year (this title scored an A+ CinemaScore, only the second time in history, following The Polar Express, that a non-Disney animated title managed to score such a grade from audiences) could yield a slightly bigger opening, but the holiday seasons are all about terrific week-to-week holds and Miles Morales and company should have no trouble soaring above $150 million in the long run.

Over in second place we find The Mule, which got off to a solid $17 million start, the fourth biggest wide release opening weekend ever for a Clint Eastwood directorial effort. It's $50 million budget means it has a ways to go before it becomes profitable but the usual December legs mean there's a good chance this one actually gets there by scraping past the $100 million mark domestically. Clint Eastwood's been on a nice box office roll lately (his five most recent movies have accounted for five of his eight biggest wide release opening weekends) and The Mule continued it with a marketing campaign that emphasized the unique presence of Eastwood as a leading man as well as making it stand out as the only thriller in the marketplace.

Interestingly, Spider-Man: Into The Spider-Verse skewed more adult than usual for an animated family movie title and that seems to be reflected by how other animated family movie titles in the marketplace didn't seem too impacted by it. For instance, The Grinch dipped only 23% this weekend, grossing $11.5 million for a massive $239.2 million domestic gross that puts it on track to surpass the $260 million domestic gross of the original Grinch movie. Right behind that grouchy green figure was Ralph Breaks The Internet, which managed to ease 41% this frame for a fourth-weekend gross of $9.5 million. That's a larger fourth-weekend drop than both Moana and Tangled but a better fourth-weekend hold than Coco. Ralph has now taken in $154.4 million domestically and seems poised for a solid final domestic gross between $220 and $230 million.

The third of this weekends crop of new wide releases, Mortal Engines, got off to a disastrous $7.5 million start, a number that's clearly way below the opening weekends of past movies Peter Jackson was creatively involved. Among other YA-novel adaptations, that opening puts it $81,000 behind the bow of Beautiful Creatures and $100,000 behind the opening of Inheart, both of which cost significantly less than this $100 million budgeted feature. Exempting last weekends Schindler's List re-release and their pair of October 2017 duds The Snowman and Thank You For Your Service, this is also the worst opening weekend for a Universal wide release since the $4.6 million debut of Popstar: Never Stop Never Stopping in June 2016. Needless to say, this one shall vanish from theaters shortly and may struggle to clear $20 million domestically even with the holiday season approaching.

Right outside the top five was Creed II, which dropped another 46% to gross an additional $5.3 million for a $104.8 million domestic total. Bohemian Rhapsody fell an excellent 32% this frame, the third best weekend-to-weekend hold in the top ten, to add $4.1 million to its domestic gross that now stands at a towering $180.4 million. If this movie can hold onto its screens through the holidays, it may just make a run at $200 million domestically. Instant Family continued to also experience strong legs at the box office by dropping only 35% this frame, giving it a $3.7 million fifth weekend haul and a domestic total of $60.2 million. Though far from the sleeper hit it was clearly positioned to be, Instant Family does look like it'll clear $70 million, a fine total for an original $42 million budgeted live-action family movie.

Interestingly, this far cheaper original feature outgrossed this frame the much more expensive blockbuster it opened against a month ago, Fantastic Beasts: The Crimes of Grindelwald, which fell 47% this frame to gross another $3.6 million. That's a slightly better fifth-weekend hold than the first Fantastic Beasts, but a significantly smaller fifth-weekend gross. With $151.6 million domestically so far, Grindelwald is looking at a final domestic gross just over or under $165 million. Rounding out the top ten was Green Book, which fell another 28% (the second best hold in the top ten) for another $2.7 million. Green Book's weekend-to-weekend hold's have been excellent, but it's having the same problem (of all movies) Smallfoot had a few months back in that such small drops are stemming from an opening weekend that came in under expectations and kicked off its domestic box office run with a weight tied around its ankle. Green Book has grossed $24.6 million after nearly a month of wide release play and with only a $2,288 per-theater average this frame, it's gonna be difficult for it to hold onto its screens in the face of the seven new wide releases arriving in the next ten days.

Right outside of the top ten we find our final new wide release, Once Upon A Deadpool, which opened to only $2.6 million. This oddball release (a PG-13 version of an R-rated film, something only the likes of The King's Speech, The Passion of the Christ and Saturday Night Fever have done in the past) was never intended to come anywhere near the original domestic gross of Deadpool 2 thanks to its low-budget and minimal marketing, but this is still an underwhelming bow for a movie starring the popular Deadpool character that 20th Century Fox launched into over 1,500 locations. Having grossed $3.8 million since its debut on Wednesday, it's likely Once Upon A Deadpool tops out at $7 million in its 12 days of release.

Expanding into 439 locations this weekend was The Favourite, which grossed $2.5 million for a $5,854 per-theater average. This Yorgos Lanthimos title has now grossed $6.7 million domestically before it even heads into wide release. Next up is yet another Fox title, Widows, which fell hard as it lost a number of its screens to the December newcomers. Dropping a steep 62% in its fifth weekend of release, Widows grossed another $1.2 million for a disappointing $40.8 million domestic gross. It wasn't the only November 2018 holdover to have a harsh fall this frame as Robin Hood plummeted 66% to gross another $1.1 million for a domestic gross of just $29.7 million. In its third weekend of release, The Possession of Hannah Grace fell 62% to gross $1.1 million for a domestic gross of $13.9 million. A Star Is Born finally had a major weekend-to-weekend drop this frame as it fell 58% from last weekend, grossing another $1 million in the process for a $199.1 million domestic gross. Looks like it'll cross $200 million either by the end of next weekend or the start of next weekend.

The top 12 movies this weekend grossed $106.1 million, the eighth biggest 50th weekend of any given year. Next weekend, the holiday season kicks into high gear as Mary Poppins, Bumblebee and (YEAH!) Aquaman head into the marketplace.
Posted by Douglas Laman (NerdInTheBasement) at 10:27 AM