Mortal Engines Is Nonsense But More Often Than Not, It's Enjoyable Nonsense 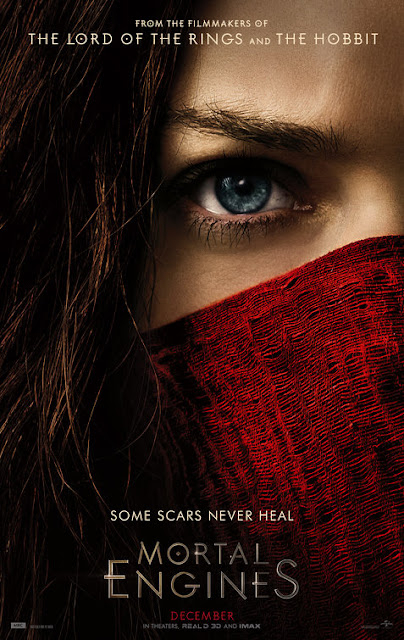 Mortal Engines is as imaginative as it is messy. Based on a series of books by Phillip Reeves, this story goes for broke in all the weirdness it can imagine occuring in a post-apocalyptic fantasy landscape where cities move around on wheels. You've got a giant vehicle that looks and moves like centipedes, the wardrobe's visual aesthetic seems like a collision of all kinds of different time-periods and an undead robot warrior all inhabiting the same story, which makes for a plot that doesn't hold together at all but at least it's usually different enough to be passably entertaining while it's unfolding in front of your eyes.


As said before, this story, which serves as the feature film directorial debut of Christian Rivers, is set in a post-apocalypse version of Earth, about a thousand years after warfare destroyed our planet and people now live in mobile cities, the biggest of which is London. Hester Shaw (Hera Hilmar) boards London in order to execute her plan for violent revenge against one of its most beloved citizens, Thaddeus Valentine (Hugo Weaving). However, she's inadvertently thwarted by historical expert Tom Natsworthy (Robert Sheehan) and they're both tossed off of London. If they want to survive against an enraged Valentine and possibly save the world, they'll have to work together and possibly team up with a notorious rebellion fighter named Anna Fang (Jihae).

Valentine's evil plans are one of the clumsiest story elements of Mortal Engines, he doesn't have much of a cohesive motivation beyond him prattling on about how "social Darwinism must end" and I don't know what else he would do with that big laser he houses in a church. All Hugo Weaving does in the second half of the story is bellow out the most generic bad guy dialogue imaginable and deliver a pointless last-minute story twist to Hester Shaw, so that doesn't help our antagonist at all. But at least Thaddeus Valentine unleashes the best part of Mortal Engines, the character of Shrike (Stephen Lang) who happens to be that aforementioned undead robot warrior.

Shrike has only one goal in life: to kill Hester Shaw. He starts out as this movies version of the Terminator before, in a move of off-kilter creativity, he becomes its primary source of pathos. Without getting into spoilers, where they decided to go with Shrike is weird as heck but it's also oddly touching. Whether he's slaughtering people or being poignant, the character of Shrike is boosted greatly by a great (presumably motion-capture?) performance by Stephen Lang, who does an entertaining scraggly version of Jackie Earl Haley's Rorschach voice in bringing this character's dialogue to life. The screenplay for Mortal Engines (credited to three writers, including its producer Peter Jackson!) is a messy creation but certain aspects like looking at an undead robot warrior as a go-to source of pathos are bold enough to earn my respect.

The approach to the costumes are similarly ambitious as it merges the fashion sensibilities of all kinds of different eras, including lowly villagers whose attire makes them look like they live in Belle's little town/quiet village to Anna Fang looking like she stepped out of a movie directed by The Wachowski Sisters. Similarly excelling on the visual front are the well-designed sets that evoke the original Pacific Rim in how they make assorted fantastical environments feel truly alive. The world of Mortal Engines is a whole bunch of steampunk madness but the well-done sets make it feel like a tangible world you could travel to with ease. In terms of visuals, director Christian Rivers actually makes a solid case for why he's graduated from storyboard artist to feature film director with his visual work as a filmmaker here.

While the sets and costumes dazzle, a number of the characters, unfortunately, leave one considerably underwhelmed. While Hester Shaw actually makes for a fine lead character thanks to both a cohesive motivation and a notable performance from Hera Hilmar, our other lead character, Tom Natsworthy, never truly works and an eventual romance that forms between the two of them is laughably clunky in execution. Tom's assorted colleagues in the city of London (which include a smarmy Adam DeVine-lookalike rival that ends up being a non-entity in the larger story) are totally disposable while Anna Fang's fellow soldiers are similarly forgettable. Just as hit-or-miss as the characters are the recurring bits of humor which include jokes about how humans use their cell phones too much in the 21st century and a gag about how Twinkies are still edible that feels like it came straight out of WALL-E and Zombieland.

Speaking of elements "borrowed" from other movies, during an otherwise exciting opening chase scene, I kept getting distracted by the score which sounded just like the Mad Max: Fury Road track Brothers In Arms. How amusing, then, to discover that Mad Max: Fury Road's composed Junkie XL also did the score for Mortal Engines! Their score is, like some of the forgettable characters and the derivative humor, the sort of generic element that tends to drag down Mortal Engines, a movie that is at its best when it goes weird as seen by the number of ambitious strange elements that do work. Even if it is incredibly messy, a movie as committed to entertaining strangeness as Mortal Engines gets plenty of brownie points in my book. I'd would easily call it the second-best movie of 2018 that features Stephen Lang as an undead cyborg warrior (You Were Never Really Here is the first-best, naturally).
Posted by Douglas Laman (NerdInTheBasement) at 11:00 AM