Paddington Is A Charming Tale With Wit And Heart To Spare 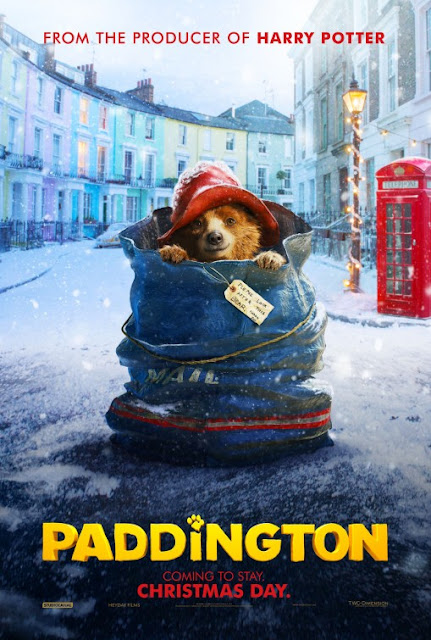 Well, color me more than a tad bit surprised that Paddington is an out-and-out charmer of a movie! What looked like yet another Alvin And The Chipmunks knock-off in its marketing turned out to be something genuinely special, a sweet tale exploring the experience of a foreign individual trying to adapt to the customs and culture of a new country. Unlike, say, Million Dollar Arm or something, the fellow whose actually trying to adjust to unfamiliar surroundings is the lead of this particular story, meaning we, the audience, get to really dive into how such an experience would affect a persons psyche.


Paddington Bear (Ben Whishaw) is a young bear who hails from a jungle in Peru, and while he loves his home, an Earthquake has decimated his domicile, meaning he must find a new place to live. Hitching a ride on a boat (with a hat and plenty of marmalade on his person), Paddington heads for London, a place an explorer told his Aunt and Uncle about many years ago. The idealized version of London he's built up in his head over the years doesn't quite match the actual version he comes face to face with once he arrives in the city of London. He's having immense difficulty finding a home and things just aren't looking very good for this grizzly fellow.

And then a family of four comes along, the Browns, one with a worrywart father, Henry (Hugh Bonneville) whose convinced a bear will bring nothing but trouble to their home. Thankfully, this family also contains the chipper Mary (Sally Hawkins) who very much wants to help Paddington find a home in this place so unfamiliar to him. For much of Paddington, the story is just about the lead character (and by proxy, the audience) getting to know the individual struggles of each member of the Brown family and how the introduction of a bear named Paddington affects them. Plus, it's fun how each member of the family subverts typical pop culture representations of moms, dads, brothers, etc. For instance, the mom of the group isn't a nagging stickler, but rather a buoyant optimist and the dad is neither a bumbling fool nor a "Father Knows Best" type, but rather an overprotective fellow who wants the all those he holds dear to be alright.

It's so lovely that the narrative of Paddington makes plenty of time for organic characterization that helps make it clear why Paddington would grow so close to these people and it's also awesome that such strong writing is complimented by a strong visual style that truly makes Paddington stand out amongst modern-day live-action family movies. A heavy dose of visual-oriented humor that relies greatly on shot composition and editing seems to frequently echo Edgar Wright and even Monty Python rather than the works of Raja Gosnell for instance. Similarly, the bright colors in the Brown house make for a warm inviting environment to match its multiple inhabitants who are similarly affable.

The CGI Paddington seen in this movie is also another visual feat worth remarking upon. So many of these live-action movies that bring well-known characters to life in CGI form try to make these famous figures look super realistic to outright creepy results. Think of those live-action Scooby-Doo or Smurfs movies, where previously adorable critters turned into the stuff nightmares. However, while there isn't a real life basis for human-sized great danes or tiny blue Smurfs to draw from, Paddington works better in a more realistic form because he is indeed derived from a more realistic creature: a bear cub. So he basically just carries the size and appearances of an adorable bear cub, just one that walks upright and has the power of speech. Thus, realistic CGI is employed with the star of Paddington to charming and extremely successful results compared to the more visually disturbing results seen in other movies of Paddington's ilk.

Also nice to see is a level of craft go into this movie that it's all too easy to see so many other filmmaking just pumping out as another run-of-the-mill piece of disposable cinema. Instead, there's real compassion running through Paddington's veins, a sweet vibe that's irresistible and comes through in its well-realized characters, including a colorful supporting cast (which includes Nicole Kidman as a villainous taxidermist) that all manage to contribute something to both the overall narrative and thematic content of the taut script. Nothing goes to waste here in the story, it's all here to serve a larger purpose, that larger purpose being creating something truly funny, heartfelt and entertaining. Mission accomplished Paddington!
Posted by Douglas Laman (NerdInTheBasement) at 9:09 AM