The Birds Isn't Quite Peak Alfred Hitchcock, Though It's Not Outright Fowl Either (Classic Write-Up) 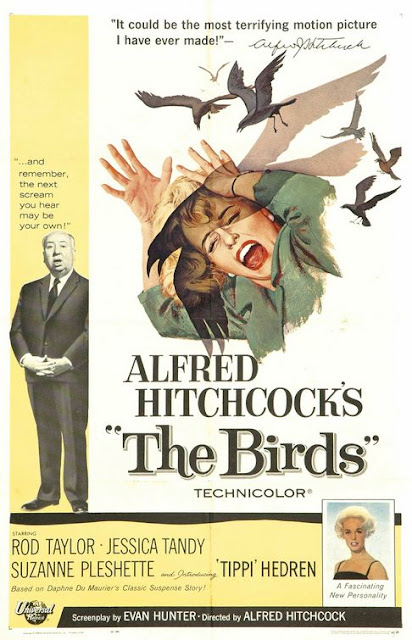 The Birds is a movie that's become one of Alfred Hitchcock's most influential features, which is truly saying something considering the dudes IMDB filmography is stacked with motion pictures whose impact spreads far and wide across the globe. Some of that I would say is due to it being one of the few horror films to revolve around threatening avian creatures (the only other noteworthy movies are B-grade schlock like Beaks: The Movie or Birdemic: Shock And Terror), giving it a sort of unique nature that makes it stands out in people's minds, there's no way you'll confuse The Birds with many other movies.


There's also no denying it's cemented itself in many people's psyches due to a large number of individuals thoroughly being thrilled by The Birds. Watching it for the first time, I found myself respecting many aspects of this feature but also coming away with a more subdued response. It feels like a definitive step down from the other two Hitchcock efforts I've watched in recent months like North By Northwest and Vertigo, but even on its own merits, The Birds has some pretty big problems to overcome that it just can't manage to soar above.

For Melanie Daniels (Tippi Herden), a routine trip to a pet store has her becoming infatuated with the know-it-all but charming lawyer Mitch Brenner (Rod Taylor). After a charming exchange in the aforementioned pet store involving a pair of lovebirds, Melanie decides to bring those two birds to Mitch (who plans to give them to his sister as a present), who happens to be with his mother, Lydia (Jessica Tandy) in Bodega Bay. This, as you can imagine, leads to Melanie and Mitch running into each other again and striking up a possible romance against the wishes Lydia, who is worried about losing the presence of Mitch.

The screenplay by Evan Hunter is clearly trying to establish a mood of naturalistic tranquility before having more stylized thrills enter the story. This is a tactic that's worked countless times in the world of scary cinema and is the kind of slow-burn based method that Hitchcock's films are known for. Problem is, the characters we're stuck with for the first half of The Birds just aren't all that interesting, with Melanie particularly suffering from a problem of the script constantly telling us things about her personality without showing them to us. We're constantly told she's reckless, hopping into fountains (possibly nude?) and pulling pranks, but that's all in the past and we're never privy to see even a hint of rebelliousness in her personality in the timeframe that this tale takes place in.

Mitch Brenner isn't much better, coming off as a generic square-jawed heroic figure without much personality to speak of. Since these two are the focus of the plot for the entire first half of the movie, things are a bit slow-going at times in this segment of the movie, though, to be fair, there are some fun dialogue exchanges and brief flashes of the terror to come that keep one's interest. And once The Birds do enter the picture, there are loads of thrills to be had, as the relentless nature of these fowl adversaries is conveyed in a super unsettling manner and plenty of menace is felt just by the sight of these ravenous creatures being perched on a telephone wire or playground equipment.

It should also be noted that the best scene in The Birds, hands down, is an extended sequence wherein various townspeople discuss a number of theories for what's really going on with these birds. It's fun how you can immediately pick out what type of archetype (crusty old sailor or "THE END IS NEAR" fellow for example) just from the physical appearance of the actors playing them while having the differing personalities bounce off each other in a small contained space leads to a perturbing atmosphere that comes from realizing that these people are already falling apart at the prospect of a bird-delivered armageddon, how will they manage to survive once it actually hits? That's the kind of unnerving content I wish The Birds had more consistently.
Posted by Douglas Laman (NerdInTheBasement) at 11:44 AM