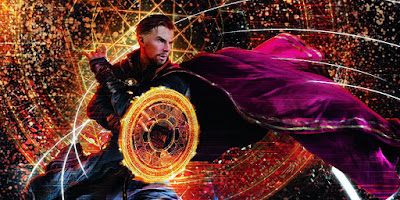 Alright, let's talk about some box office figures, shall we? Maybe it'll take all of our minds off some....not so good recent real world events for just a moment.

So, Doctor Strange won the box office again, this time taking home $44 million, a great 48% decline from last weekend, on par with the 48% decline Iron Man experienced in its second weekend all the way back in May 2008 and the first Marvel Cinematic Universe movie to lose under 50% in its second weekend since Thor (which lost 47%) back in May 2011. Much of that tiny dip can be attributed to Veteran's Day falling on a Friday this year and boosting its grosses, but this dip does show there's also some strong word-of-mouth working in this movies favor. Doctor Strange has now grossed a great $153 million in ten days and should hold well over the Thanksgiving holiday week to come.

Also getting a boost from Veteran's Day on Friday was Trolls, which lost only 25% to gross another $35 million. Trolls is now up to a $94 million 10-day domestic total, which is 15% ahead of The Peanuts Movie and 6% ahead of MegaMind at the same point. As long as it doesn't get absolutely crushed by Moana over Thanksgiving, Trolls probably could get $150 million domestically, a solid sum for the animated musical.

Coming in third place was easily this weekend's highest-grossing new release, Arrival, which took off with a strong $24 million. That makes it the eighth biggest opening weekend ever for Amy Adams and 16% above the debut of director Denis Villeneuve's 2013 effort Prisoners. A not too shabby opening for this one, especially since it was an adult-skewing drama not based on a super famous person and the source material it's based on isn't exceptionally well-known. A strong marketing effort that emphasized its lead actors, unique imagery and the basic concept of how to communicate with aliens won the day though. I'm curious to see how it holds up over Thanksgiving since there's a ton of adult dramas on the way but none are science-fiction oriented like Arrival.

Almost Christmas had a decent bow this weekend, taking in $15.5 million, the 17th biggest opening weekend ever for a Christmas themed movie. In terms of Christmas comedies, that's a whopping 59% above last November's The Night Before, 22% above the debut of A Very Harold & Jumar 3D Christmas while being 3% below the bow of Tyler Perry's A Madea Christmas and 16% below the debut of Fred Claus. I'd wager this one ends its domestic run in the $55-60 million range, though it may go higher since Christmas-themed movies do tend to stick around for a while, particularly ones opening in November.

Rounding out the top five was Hacksaw Ridge, which saw a strong 29% dip to add $10.7 million to its domestic total that now stands at $32.2 million. Not too shabby stuff and it looks like this one should have no problem getting over $50 million domestically. In sixth place was The Accountant, which is really turning out to have some true blue box office stamina. Grossing another $4.5 million this weekend, The Accountant only lost 22% in its fifth weekend of release to bring its domestic sum to a strong $77.7 million and should finish its impressive domestic run in between $85 and $90 million.

EuropaCorp hit its third straight wide release box office dude with Shut In, a Naomi Watts thriller that took in only $3.7 million, a disastrous performance that's somehow still the 10th best opening weekend ever for Naomi Watts. Considering I'm supposed to know about every domestic releases existence and even I had no clue this thriller was coming out this weekend, I can only imagine how little of a presence this had for general moviegoers. If Shut In gets above $8 million domestically, I'll be astounded.

Boo! A Madea Halloween grossed $3.5 million this weekend, a 54% decline from last weekend that brings it excellent domestic run to $70.4 million. And rounding out the top ten was Inferno, which added $3.2 million (a 47% decline from last weekend) which now makes it domestic total stand at a pitiful $31.5 million. It's borderline impossible that this one exceeds $40 million domestically, a disastrous result that even solid international box office won't be able to rectify.

Continuing to expand its presence at theaters across the nation was Moonlight, which grossed $1.3 million in 176 locations for a per-theater average of $7,732. Moonlight has now grossed $4.7 million and is apparently expanding into wide release this coming weekend.  Loving also further expanded its theater count to 42 locations and grossed $532,000 for a per-theater average of $11,565 and has now grossed $740,191 domestically.

The Top 12 this weekend grossed an excellent $150.2 million, a whopping 57% increase over this same weekend last year when Spectre was ruling the box office again over a far more meager crop of newcomers. It's also the 2nd biggest 46th weekend in any given year that did not immediately precede Thanksgiving. Looks like November 2016 is proving to be a srong reobund from a lackluster Fall 2016 box office.
Posted by Douglas Laman (NerdInTheBasement) at 8:32 AM