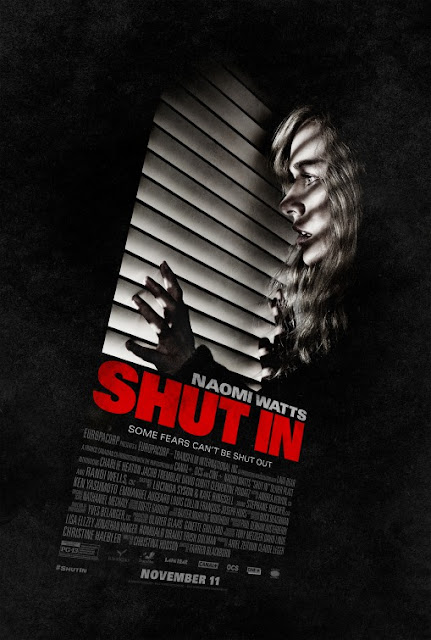 For a thriller, Shut In is sorely lacking in actual thrills. Actually, it's more likely to instill a sense of tedium in prospective audiences rather than dread or unease. It doesn't even manage to be a uniquely bad movie, it's just endlessly dull even with a couple of nonsensical plot twists stashed away in its bare-bones story. Poor Naomi Watts and Jacob Tremblay, they deserve so much better than this chilly idiocy to star in. At least Tremblay will have a failed movie project he can joke about with interviewers once the next Academy Awards ceremony rolls around.


For Mary Portman (Naomi Watts), helping youngster with their own psychological or physical issues is a great calling, even when one of those patients happens to be her son, Stephen (Charlie Heaton). Her withdrawn offspring is soon paralyzed in a car crash that kills off Mary's husband. Now it's up to Mary to solely take care of Stephen and still take care of new patients, like a deaf boy named Tom (Jacob Tremblay). Soon after meeting the child, Tom goes missing, and when creepy things start happening around the house, Mary believes the ghost of Tom is responsible for all of the spookiness.

Confined to one snow-covered house for its entire running time (save for one or two moments on nearby roads), Shut In starts out boring and just has an ever-escalating sense of monotony as one tedious scene transitions into another uneventful scene. The moments intended to be scary couldn't be further from their intended tonal target, mainly because it's all stupid jump scares that culminate in fake-outs, including multiple instances of weird things transpiring immediately followed up by Mary waking up in her bed, revealing all that stuff was a dream.

It's as if the movie is taunting its audience with the prospect of something actually occurring in this stagnant story only to keep undercutting any promise of actual activity in the most trite way possible. For much of the running time, all that happens in Shut In is these kind of stupid fake-out jump scares, including one that goes on for an aggravatingly long time and then culminates in a raccoon gently popping out of a wall. Nothing happens in the relationship between Stephen and Mary nor does the character of Dr. Wilson (Oliver Platt) do anything more interesting than provide monotonous expository dialogue to Mary Portman via the magic of Skype.

I think Mary did have a quiet dinner with some guy named Doug at one point which goes nowhere. He doesn't show up in the climax or anything like that, he just floats into the film briefly and then leaves. How I envy that man's ability to do that! After two acts of pervasive boredom, Shut In finally throws in a twist that's happening in the real world.  Despite said plot twist involving Naomi Watts being tied up to a bathtub like she's in a fetish-based adult movie as well as some explicit incestuous overtones, even this never gets even entertainingly bad. Instead, Shut In switches gears from being a boring thriller to being an equally boring slasher movie knock-off, complete with awkward pacing of certain moments (like the bloodthirsty antagonist surveying to see if Mary has escaped to the outdoors) that are the antithesis to the way certain movies like Halloween execute feelings of dread and terror so perfectly.

Look, I love Naomi Watts, I totally think she should get and deserves more lead roles. But good Lord, not in garbage like Shut In! This whole movie is like the horrible result of someone wishing on a Monkey Paw that they want Naomi Watts to headline more motion pictures. Shut In is a dismally boring movie that succeeds as neither an actually good movie or an interesting audacious failure. It's just stupid and dull. Trust me on this one, leave Shut In out in the cold where it belongs!
Posted by Douglas Laman (NerdInTheBasement) at 2:51 PM