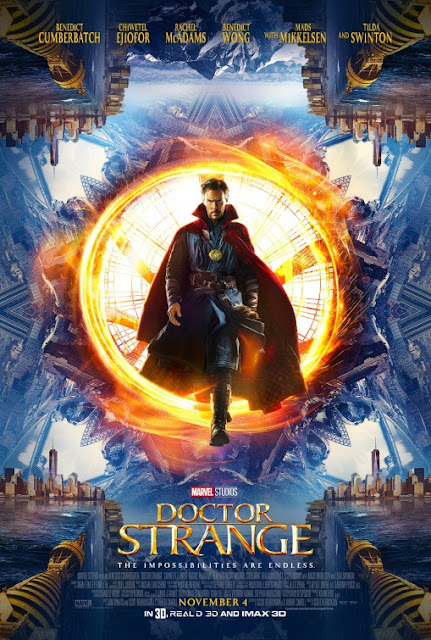 A number of these non-sequel Marvel Cinematic Universe features have big questions looming over them that somehow make new entries in one of the biggest franchises of all-time "underdogs" in certain respects. For Doctor Strange, the queries surrounding this property are particularly noteworthy. Can Benedict Cumberbatch play Doctor Strange in a way that doesn't immediately remind viewers of the countless other socially inadequate but brilliant characters he's played? Can the character of Doctor Strange be executed without coming off like Iron Man 2.0? And then there are the uncomfortable racial aspects to the character that have only been compounded by the white-washing casting of Tilda Swinton as the Tibetan character The Ancient One.

Thankfully, Doctor Strange is an unabashedly unique creation whose best moments (and there are plenty of those!) comes from embracing what makes this character so different from other Marvel Comics creations, which, thankfully, means his own arc of "Arrogant rich dude gets into physically damaging accident that leads him down the road to superpowers" feels surprisingly different from the likes of Tony Stark. It also must be said that one of the biggest question marks of this production, choosing Scott Derrickson (whose last blockbuster endeavor, the 2008 remake of The Day The Earth Stood Still, was a total snooze), turns out to also be no concern for Doctor Strange since Derrickson has a definitive visual vision for this motion picture that comes through in spades.

For the majority of you non-geeks that likely are unfamiliar with Doctor Strange from his comic book and handful of animated TV show appearances (he also got to headline a 1978 TV movie), his origin concerns impressive surgeon Stephen Strange (Benedict Cumberbatch) being an arrogant fellow whose life is thrown into tragedy when a car crash leaves his hands severely damaged. He can no longer be a surgeon and his life loses all meaning. He spends his last dollars traveling to the domain of The Ancient One (Tilda Swinton), a being who may just be able to help him out.

How can she help you ask? Well, as Stephen finds out, The Ancient One is actually a sorcerer, one who can conjure up spells, portals and other mechanisms that Stephen Strange can learn about in order to still help people despite his critical injuries. These mystical powers are, after all, beyond one's mortal coil. From there, Stephen trains in the mystic arts with the help of Mordo (Chiwetel Ejiofor) and Wong (Benedict Wong) and soon learns of the threatening presence of Kaecilius (Mads Mikkelsen), an evil wizard who looks to use some very dark magic to turn our world upside down.

Perhaps, from reading my plot summary, you may know where things are going in this story, but the stroke of brilliance in Doctor Strange is that it makes the journey to its destination so much fun and dramatically interesting. First off, kudos to writers Scott Derrickson and C. Robert Cargill for figuring out how to make Stephen Strange in his arrogant state can still be a character audiences can be invested in. This is, thankfully, not a Hal Jordan in Green Lantern situation where we're supposed to think the arrogant jackass is "so cool bro!". Nah, characters are constantly calling out Stephen Strange for being crude or demeaning to other people, and when he gets into the realm of magic, he's constantly out of his depth and not quite knowing where to go. Plus, even when he starts to become more proficient in magic, he's still got his selfish qualities to him, making the concept of Strange's more self-centered nature as much of a villain in this story as the physical antagonist Kaecilius.

Not only that, they make the wise decision to make Strange more brash and selfish rather than overtly mean-spirited in his early scenes, a smart move that ensures that we, the audience, see that this guy has plenty of room to grow but he's nowhere near malicious enough for one to feel like a scarring car crash is some form of comeuppance. I personally felt sympathy for this poor fella enduring all this pain and I have a hunch I'll be far from the only one to feel such emotions for Strange in this state. It also needs to be said that the extensive casting search for this character (that encompassed Joaquin Phoenix, Ewan McGregor, Jake Gyllenhaal and thankfully passed over Jared Leto) made the right choice in Benedict Cumberbatch, who manages to make sure Strange is different from his past roles and he give Strange this confident charm that's both winning in its own right and fun to see get knocked down when Strange is out of his depth in the realm of magic.

The supporting cast has a number of great performances too, most notably Tilda Swinton in an excellent turn as The Ancient One. I love how Swinton channels her otherworldly gravitas into this character in a way that exudes a presence quite unlike anything else in the movie or the entire Marvel Cinematic Universe for that matter. Wong thankfully ditches his hideously outdated persona from the comics in favor of a more entertaining personality that brings some of the movie's best jokes. It should be noted that, alas, Rachel McAdams plays yet another underdeveloped MCU love interest (can female characters catch a damn break in this universe??), as her character Christine Palmer doesn't have a lot to do, though at least she avoids some tropes (namely being constantly ogled by the camera and being a damsel-in-distress) love interests in these kind of blockbusters fall into. Hopefully she and a bizarrely underutilized Michael Stuhlbarg get properly utilized in the inevitable sequel. Maybe McAdams will even bring her fellow Plastics with her next time around! That'd be so fetch!

But maybe the real star of this show is the riveting visuals used in the magic-centirc sequences. Worried that all of the talk in the press by the filmmakers of the visuals having psychedelic and Steve Ditko influences is just talk? Don't worry, there are tons of super trippy visuals to go around, some even carrying a 2001: A Space Odyssey vibe (there is at least one shot that's an explicit homage to that Stanley Kubrick classic) to them in that they make the viewer feel like they're witnessing another dimension of existence all together. It's real treat to see such bombastic visuals be thoroughly embraced by the film, and it's also awesome that Doctor Strange decides to accompany all of that beautiful style with serious substance in its lead character. It may have taken over thiry years of development (with even Wes Craven at one point being in-line to direct a Doctor Strange movie in the 80's), but decades of patience have paid off big time for the thrilling joy ride that is Doctor Strange.
Posted by Douglas Laman (NerdInTheBasement) at 9:15 AM