OK, How About We Get All Of The Details Straight On The Inhumans Becoming An ABC TV Series That'll Air Right After The Middle, Shall We? 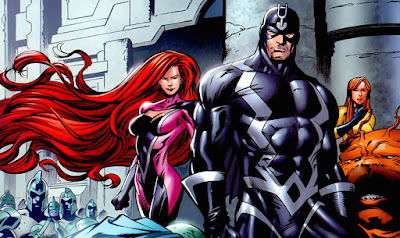 I'm not as familiar with The Inhumans via their comic book appearances as I am with numerous other Marvel comic book characters, but they are the kind of overtly stylized science-fiction nonsense I can groove on rather easily. I mean, the Royal Family of Inhumans contains a guy who can't speak lest he his vocals destroy entire planets, a woman whose hair can tear enemies apart, a fish person and a gigantic teleporting bulldog. When it was announced this Royal Family would be headlining a Marvel Cinematic Universe movie to be released in November 2018, well, I was happy as clam.


The plans for the Marvel Cinematic Universe have obviously been altered over the past two years to accommodate for additional Spider-Man and Ant-Man movies and The Inhumans movies got pushed off the calendar last Fall.  Kevin Feige, the head of Marvel Studios, was still saying recently that The Inhumans movie was a likely candidate to be a film in 2020 or thereabouts...and then last night it was announced that ABC will air an Inhumans TV show focusing on Black Bolt and The Royal Family. in Fall 2017, with the first two episodes debuting in IMAX screens first.

So, uh, lots to process. Yes, even after the abject failure of Agents Of S.H.I.E.L.D. (the show bungled its season two finale so badly even with the presence of Kyle McLachlan I haven't even watched the thing in 18 months) and not giving Agent Carter anywhere near the platform it deserved, ABC is still gonna try the Marvel Television thing the o'l college try. Unlike Agents Of S.H.I.E.L.D., this Inhumans TV show will run for only 8 episodes and (unless I'm misreading things) will be filmed entirely with IMAX cameras.

I have no clue how they can visually depict the various powers of the Royal Family on a TV budget and good Lord do I hope the costumes are better than the utter garbage other Marvel Television shows have given to the likes of Diamondback, Deathlok and Daredevil. Seriously, the Inhumans have such cool costumes in the comics and now they'll probably get some bargain-bin costumes ABC had lying around from Of Kings And Prophets. Something else that makes me discouraged about this news; the Twitter header image for the Inhumans Twitter page notably cuts out Lockjaw, making me think that lovable pooch will not be around for this show since it'd be understandable expensive to do a CGI dog on a weekly basis on a TV show.

We shall see if this thing actually works as a TV Show. No word on the creative personnel working on this show nor who they're gonna cast for it. I doubt the earlier assumptions (spurred by the actor himself) that Vin Diesel would play Black Bolt are gonna happen now that the Inhumans are gonna be a frigging ABC TV show. I'm personally disappointed that two notable female superheroes (Medusa and Crystal) are getting relegated to the small-screen since the MCU movies desperately need more women superheroes. Can we at least get a Kamala Khan movie down the line? I mean, if you're likely not using Lockjaw here, how about giving that canine the limelight as Kamala's trusty sidekick!
Posted by Douglas Laman (NerdInTheBasement) at 10:15 AM