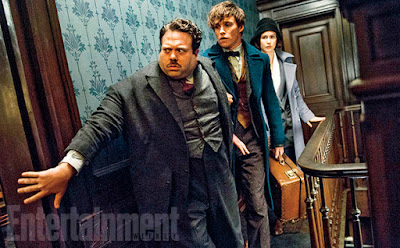 15 years after Harry Potter first debuted in movie theaters everywhere, Newt Scamander began his cinematic journey with Fantastic Beasts And Where To Find Them, which grossed a solid $75 million this weekend. That's considerably below the opening weekends of all the Harry Potter movies, even the two that debuted on Wednesdays and is also the lowest grossing opening weekend for a movie bowing in the pre-Thanksgiving frame since Twilight debuted to $69.6 million eight years ago. It's the eighth biggest opening weekend ever for a prequel and is already the highest grossing live action movie Dan Fogler has ever appeared in.

Fantastic Beasts (which carries a $180 million budget) was always gonna have the challenge many prequels face at the box office, namely trying to live up to the box office of past installments while establishing its own identity. The marketing for Fantastic Beasts didn't quite do enough to make Newt and his world stand on their own, lacking the universal every-person angle the Harry Potter or even Hunger Games and Twilight movies had in their marketing that helps ground the more fantastical elements. That being said, this is still a solid sum for something that was very much differentiating itself from the main Harry Potter mythology in its marketing and its gangbusters foreign box office already guarantees we'll be getting some sequels, though if we end up getting all four follow-ups remains to be seen. If Fantastic Beasts plays like the three Hunger Games movies that debuted in the pre-Thanksgiving slot, it'll likely end up grossing just below or just above $200 million domestically.

Taking a post-Veteran's Day weekend tumble was Doctor Strange in second place, which dropped 59% (a larger third weekend decline than last years early November blockbuster Spectre but better than the larger third weekend drop Thor: The Dark World faced in its early November run) to gross $17.6 million this weekend. The newest Marvel Cinematic Universe movie has now grossed a great $181.4 million domestically, putting it past the entire domestic cume of Ant-Man in just 17 days. This one will probably end its domestic cume in the neighborhood of $225-230 million. Right beind Doctor Strange was Trolls, which lost 50% this weekend to add $17.5 million to its domestic cume, which now stands at $116.2 million, putting it past Mr. Peabody & Sherman among DreamWorks Animation titles at the domestic box office. While Trolls will take a hit from Moana this weekend, it should have no trouble getting past $150 million domestically.

Arrival came in at fourth place this weekend, grossing $11.8 million (a 51% decrease from last weekend) and bringing its 10-day domestic gross to a solid $43.3 million. Rounding out the top five was Almost Christmas, which grossed $7 million, a 53% decrease from its opening weekend. Almost Christmas has now grossed $25.4 million in ten days. In sixth place this weekend was Hacksaw Ridge, which took in another $6.7 million (a 37% dip, making it the only film in the top ten to dip below 50%, let alone 40%!) that takes its domestic cume to a solid $42.8 million and it's likely Hacksaw Ridge will end its domestic run in the vicinity of $60 million.

And now we finally get to another one of this weekends other new releases and boy howdy was it not a good weekend for a wide release newcomer that wasn't Harry Potter. The Edge Of Seventeen grossed only $4.8 million, an underwhelming number even given its small budget (it only cost $9 million). Strong reviews just couldn't bring this one to higher results and it's unlikely it'll stick around in theaters beyond Thanksgiving.

Also not long for this world financially is Bleed For This, which grossed only $2.3 million at 1,549 locations this weekend, the fourth worst opening weekend ever for a wide release for mini-movie studio Open Road Films. It's also the worst wide release opening weekend ever for Miles Teller. It'd be shocking if this one got past $6 million domestically. And rounding out the top ten was the second weekend of Shut In, which grossed only $1.6 million, a 55% plummet from last weekend that brings the newest box office dud from the American self-distribution arm of EuropaCorp whose current highest grossing release is Nine Lives with $19.7 million.

Right outside the top ten was Moonlight, which expanded into wide release this weekend (it's now playing in 650 locations) and grossed $1.58 million for a per-theater average of $2,436. That's an OK result but it's likely that A24 was hoping it'd perform a tad better given the kind of phenomenal business it's been getting in limited release for a month now. Moonlight has now grossed $6.7 million domestically.

Billy Lynn's Long Halftime Walk also expanded into wide release this weekend to disastrous results, grossing only $930,000 at 1,176 locations for a dismal per-theater average of only $791. Billy Lynn had a number of obstacles it would have to face from a marketing perspective (it isn't based on a hugely well-known real-life figure nor is it adapted from a very popular book) and the large amount of adult-skewing dramas in the marketplace and the mixed marks it received from critics only added onto the pile of challenges it faced. Few could predict it would perform this badly though and it's guaranteed to be third lowest-grossing movie ever for Ang Lee, only ahead of Pushing Hands and Ride With The Devil, neither of which played in more than 60 theaters.

Loving expanded its theater count this weekend before an inevitable wide release over Thanksgiving, going into 137 theaters to gross $854,000 for a per-theater average of $6,234. Loving has now grossed $1.7 million domestically in 17 days of limited release.

Debuting in limited release was Nocturnal Animals, which bowed in 37 theaters to gross $494,000 (the 35th biggest opening weekend in 2016 for a limited release) for a per-theater average of $13,351, an alright sum that likely ensures the film will meet its target wide release date of December 9th. Whether or not this one can beat the $9.1 million sum of director Tom Ford's last movie, A Single Man (Which is such a phenomenal and underrated motion picture, by the by), remains to be seen.

Also debuting to outstanding box office this weekend is Manchester By The Sea, which grossed $241,230 at 4 locations for a per-theater average of $60,308, the fourth best per-theater average of 2016. That's the best opening weekend for a Sundance 2016 film opening in limited release and third biggest opening weekend for any and all Sundance 2016 titles. The plan is to gradually expand this one into more theaters December goes along, likely culminating in a wide release on Christmas Day.

Also debuting in limited release this weekend was the long-delayed Idris Elba film The Take, which grossed $39,000 at 100 locations a pitiful per-theater average of $390.

The top 12 this weekend grossed $149.4 million, a 10% decrease from this same weekend last year when the last Hunger Games movie was at the top of the box office and that makes this the lowest-grossing pre-Thanksgiving frame in 12 years.
Posted by Douglas Laman (NerdInTheBasement) at 10:30 AM