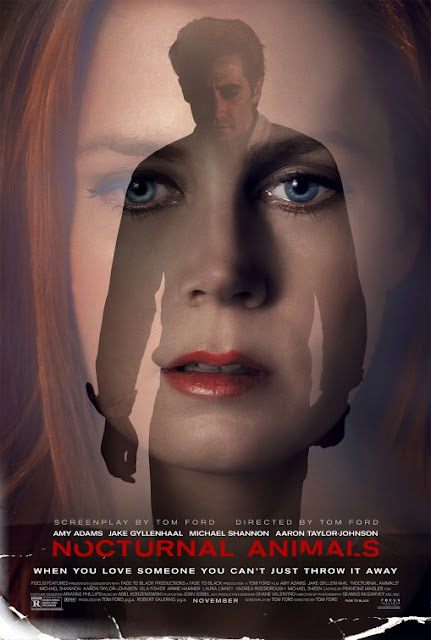 Have you ever heard of Paciugo? It's a gelato place that allows you to have multiple flavors of ice cream in one bowl! There's a couple of Paciugo's near where I live (one of them is even inside the movie theater I see most of my movies in!) and the narrative structure of Nocturnal Animals reminds me of one of the confections you could get at Paciugo, in that multiple different storytelling flavors are incorporated into one bowl/movie. You've got a Southern revenge thriller, a high-society slow-burn thriller filled with regret and a romantic drama that dovetails into tragedy.

Trying to wrangle all those differing vibes into one movie is quite the challenge even on just a conceptual level. Luckily, we got writer/director Tom Ford handling this production and Mr. Ford shows quite a bit of versatility in his filmmaking here. Now, the main plotline of Nocturnal Animals, (the framing device I suppose) stars Susan (Amy Adams), a lady whose life of high-class art, posh parties and a distant husband is leading her to feel unfulfilled. Her mind is thrown for a loop when she receives a manuscript for a soon-to-be-published story written by her ex-husband Edward (Jake Gyllenhaal).

The story he's written is that aforementioned Southern-set revenge thriller, one that has a character surrogate for Edward (also played by Gyllenhaal) getting embroiled in a tragic vengeance-fueled crime story. In between the framing device and the visual recreation of Edward's story, various flashbacks of Edward and Susan's life together as a couple are also shown. There's a lot of dramatic ground to cover in Nocturnal Animals, but Tom Ford's screenplays does an adept job juggling the various characters and differing vibes without his work coming off as convoluted. The fact that it's easy to see the dramatic connective tissue between the various plotlines certainly helps make everything flow together well, particularly the down-to-Earth flashbacks with Edward and Susan which have their own tragic energy to them that (purposefully) matches the heightened crime story Edward has written.

It cannot be underestimated how much of an asset the incredible cast Nocturnal Animals has assembled is to making the movie work so well. Amy Adams (whose done one or two good performances in the past I'd say) gets to play both her bubbly outgoing persona in the flashback sequences and a more withdrawn demeanor in the framing device with equal levels of commitment. As the fictional surrogate for her ex-husband, Jake Gyllenhaal is an oddly intimidating everyman in his performance while this crime thriller contains two notable and unexpected supporting turns from a charming Michael Shannon (who gets the film's biggest laugh) and especially an antagonistic turn from a menacing Aaron Taylor-Johnson.

Of the three plotlines, the Amy Adams framing device is probably the weakest, only because it has a tendency to become repetitive, but even here there's plenty of good shots and a riveting performance from Amy Adams to keep the weakest moments plenty watchable. Managing to shine throughout the movie is director Tom Ford, who actually proves to be a versatile filmmaker in terms of visuals in this movie. The three differing tones have their own visual identity to them that suits the individual plotlines and they all manage to leave an impact. The framing device has a polished, subtly unsettling look to reflect the unfulfilling life Susan has found herself in, the romantic flashbacks have a pleasing aura to them to reflect the slowly dwindling as times goes on happiness in them and the mystery thriller portion of the movie have a rustic aesthetic to match the grim plot points within.

Ford also manages to excel with keeping up the suspense in the story Edward has written, particularly in an early scene set on an empty road at nighttime that introduces the primary foe of this storyline. The tension crackles as this unpredictable figure played by Aaron Taylor-Johnson wavers about, his next action being impossible to predict. His very presence is threatening and Tom Ford makes sure to stretch the tension for as long as possible. It's a gangbusters sequence and it's awesome that Nocturnal Animals realizes how much better thrillers can be when they emphasize well-done characters and well-orchestrated tension above cheap jump scares.
Posted by Douglas Laman (NerdInTheBasement) at 9:54 AM