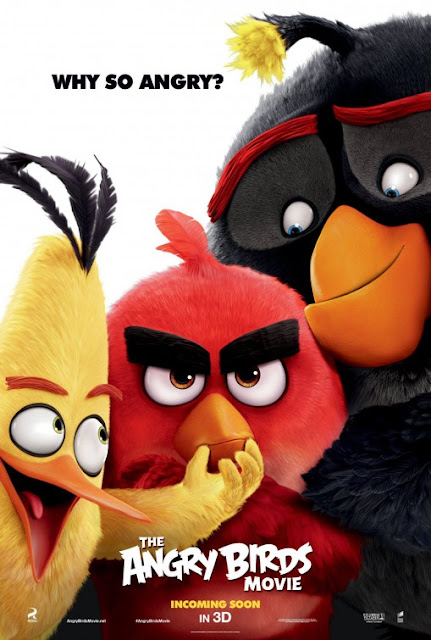 One day, we'll get a good video game movie. Hell, we've gotten multiple high-quality movies using video game iconography like Scott Pilgrim vs. The World and Wreck-It Ralph. But as for direct film adaptations of video games? We're still not there yet. The Angry Birds Movie does nothing to reverse this trend, though its flaws aren't so much related to the failings of other video game movies as they are about this movie clearly trying to imitate conventional tropes of major American computer-animated family movies without understanding how to make these storytelling staples work in a remotely successful manner.

Let me give you a clear example of this. Many of these types of movies have a protagonist who's an outsider, an underdog character who has a natural inclination to do more than what society has offered him. Think Po The Panda in the Kung Fu Panda movies or Remy The Rat in Ratatouille. Well, The Angry Birds Movie wants to do that exact same type of character for its protagonist, Red (Jason Sudeikis) which is totally fine. But the qualities that make Red an outsider aren't lovable personality quirks or natural gifts but rather him just being an asshole to anyone who's unfortunate enough to walk across his path. It's hard to feel sorry for Red in an early montage depicting him being lonely when he's A) been a jack-ass to everyone in the movie up to that point, and B) he just flat-out rejected a social invitation from fellow bird Chuck (Josh Gad).

Red isn't the only Angry Bird in this movie though, there's also that Chuck fellow, a guy whose biggest accomplishment at the start of the story is defecating on a law enforcement officer. There's also Bomb (Danny McBride), the typical "dumb sidekick" archetype who doesn't get enough screentime or humorous moments to leave an impact. They must band together when their island is visited by a vast array of pigs lead by porker Leonard (Bill Hader). The pigs show up to the remote island that Red and all of his fellow birds live on one day and Red is immediately suspicious of them and constantly tries to get his fellow fowl to see they're bad because they're different, meaning our lead character is now a jerk and a xenophobe. Charming!

So, we've got a bunch of unlikable characters and a plot that hinges itself on how many loud noises or references to pieces of modern-day vernacular ("SQUAD GOALS!!" gets dropped at one point by Leonard) it can shove into one scene. In terms of quality, the pervasive celebrity casting is almost as bad as the sloppy storytelling, with a ton of really funny comedians getting wasted in one-line cameos and a number of the main characters voice actors not working at all for the individuals they're portraying. Most notably, Jason Sudeikis is terrible as Red, sounding often times more outright bored than angry. And, pray tell, why is Kate McKinnon around to deliver 5 bland lines that anyone could have delivered? She would have made for a better voice actor for Red for Christs sake, at least she has some energy in her vocals!

The Angry Birds Movie is the sort of motion picture that wants to please everybody at the detriment of actually accomplishing anything artistically. Its soundtrack (a mixture of new pop songs that play in the background or covers of old pop tunes) spans multiple genres but none of the tracks leave an impression. Plenty of jokes for adults pop up, but they're so overtly adult-skewed (Red manages to say both "Pluck my life" and tells a bird parent with lots of offspring "Have you tried bird control?" in short order) they feel out of place in a movie with a plot and tone so clearly aimed at young 'uns. And then it tries to also be saccharine in third act scenes showing the birds mourning for their missing eggs that the pigs have taken and it falls completely flat. Nothing in this movie has tried to make me care about these birds, mainly because I've spent all my time with Red who just hates these people.

By the time we get to a climactic battle that has the whole "Slingshot birds into pigs" gimmick from the games adapted into a cinematic format, everything in The Angry Birds Movie has melted into an amalgamation of pointless noise and even more pointless characters. At least it all looks reasonably pretty, particularly the backgrounds, though the bird beaks for some reason look really cheap, no clue why. The only other compliment I can offer this thing is that there are a couple of 20-second bits where it gets really weird, like an extended fantasy involving Chuck imagining himself getting his chest signed by a male stripper, that are bizarre, but there's only three or four moments like that in here and it's not worth trodding through the derivative to many many faults Angry Birds Movie to get to those bits.
Posted by Douglas Laman (NerdInTheBasement) at 9:15 AM