What The Actual Hell Is Going On With American Pastoral? 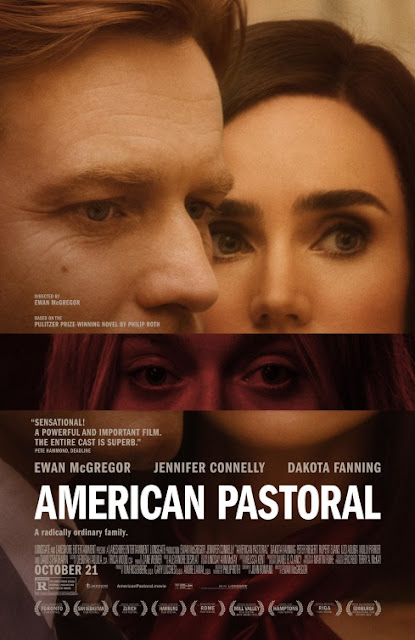 Now that we're 50 years removed from America in the 1960's, any given storytelling has enough distance from that 10 year period in this countries history to cultivate a story that can really lend a sharp eye to this decade with a sense of perspective. For his directorial debut, Ewan McGregor adapts the Philip Roth novel American Pastoral, which primarily takes place in the 1960's and revolves around various events that shaped this era, namely the Vietnam War and radical protestors of this war. And it ends up saying nothing at all and doing nothing despite attempting to give off the impression that lots of something are occurring on-screen. It's like that one passage from an Alice In Wonderland book where Alice has to keep running just to stay in one place.

OK, let's work through the convoluted mess that is the narrative of American Pastoral. Told through a pointless framing device that stars David Straitharn, we meet our protagonist, Seymour (Ewan McGregor), a glove manufacturer whose got a seemingly perfect life, complete with a happy wife, Dawn (Jennifer Connelly) and a daughter named Merry (Dakota Fanning). Their idyllic life is fractured by the fact that the teenage Merry has become super against the Vietnam war and is becoming a crabby and rebellious figure as she revolts against the world around her.

Then the day comes that a local post office is blown up, killing an innocent man, and Merry is the top suspect of the attack. She's gone missing, no one knows where she is, but Seymour is determined to find her and bring her home. Once Merry goes missing, the movie devolves into almost feeling like a poorly-made anthology movie in that the various scenes that unfold feel so disconnected from one another to the point that they feel like that they're coming from different movies. Here's a prime example of what I'm talking about; there's this lady named Rita (Valorie Curry) who goes to Seymour to retrieve some of Merry's personal items and....she says she's friends with Merry, but later on in the movie says she can't stand living with her anymore...but Merry later on in the movie says that she never sent Rita to find Seymour.

We're never given any indication to believe she's lying, so what was Rita's relation to Merry? Was she just in the movie so we could have an excruciatingly long sequence where she attempts to seduce Seymour in a hotel bed and then imply that she's having a Lesbian affair with Seymour's daughter? Her motivation changes from scene to scene to scene and Rita is far from the only character to suffer from this kind of schizophrenic writing. American Pastoral as a whole comes across like a jumbled list of ideas for individual stories that have been smushed into one narrative to extremely unsatisfying results. Plus, it's constantly all over the place in terms of the type of story it's trying to tell. Is it a thoughtful drama? A thriller that indulges in the sort of peak-Dad fantasy that made Taken a phenomenon? A mixture of both? I don't know and I have a hunch the folks behind this film had even less of a clue as to what the hell it actually was.

Was any thought even given as to what Seymour represents in this story? He's just sort of a Dudley-Do-Right wet blanket with no depth to speak of. Even when his daughter is acting as abrasive as can be, he's still a steel-chinned and good-natured as any good o'l American boy can be. Are they trying to have Seymour represent the conventional image of the stoic "Father Knows Best" male archetype popularized in this era? Perhaps that was the intention at one point, but as executed in the final version of this movie, Seymour is three times as dull as dishwater, lacking any sort of depth to make him anymore than just a pathetically boring protagonist, though, to be fair, Ewan McGregor does have one or two fine moments acting-wise as the character, though he's mostly just a flat-line otherwise.

Jennifer Connelly is given next to nothing to do in this story, with the story primarily focusing on Seymour and his plight once their daughter runs away after that fateful post office bombing. Connelly's character suffers greatly from the aforementioned haphazard writing that has characters entire personalities shifting from scene to scene. Most notably, Dawn mentions in a critical scene that Seymour kept hounding her to marry him...but the only flashback we, the audience, see of the two in their courting years has Dawn fighting like hell against Seymour's father for her to marry him!! Is she making this recounting of the past up in her grief-stricken state? Was the original flashback a bald-faced lie, a commentary on looking at the past with rose-colored glasses? Nothing in the movie indicates either of these approaches are what's happening, it instead just comes off as American Pastoral making up crap as it goes along to wring out layers upon layers of contrived drama. And don't even get me started on poor Dakota Fanning, saddled with playing an amateurish stereotype of a rebellious teenager and also being forced to deliver obstreperous filled lines like "Well you're pro-cow!" to her mother. Good God, it's practically a crime how American Pastoral wastes its talented line-up of actors and the thematically rich decade in which it is set on such a garbage story.
Posted by Douglas Laman (NerdInTheBasement) at 8:40 AM