Prepare For Glorious Battle With The New Trailer For Wonder Woman!! 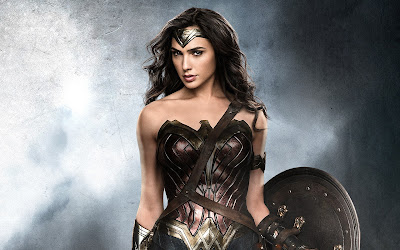 So...look, it's been a bit of a rough year for DC, let's not beat around the bush. Neither of their live-action films were quite the box office bonanzas (read: billion-dollar hits) they were hoping for, both Suicide Squad and especially Batman v. Superman were critically savaged and even that Killing Joke movie became a punchline thanks to a Comic-Con panel gone horribly awry and that Batman/Batgirl romantic subplot. Luckily, the future holds some hopeful properties such as a new animated Justice League TV show that looks like a lot of fun and next year's Wonder Woman movie, which just dropped a new trailer that you can watch directly below!

I kind of love this trailer, not even gonna lie. First of all, the camerawork in this trailer is really interesting to me, lots of elongated single-takes that frequently rely on slow-motion and add a bombastic quality to the footage fitting for such a stylized character. Even better is how Wonder woman thrusts herself into the role of helping those around her. She's no brooding mopey mess (*Cough* Man Of Steel*Cough*), nope, she's a superhero dammit and one that's looking to help those around her. What a promisingly hopeful angle to take with this individuals first (and long overdue) feature-length motion picture!

Plus, it's cool to see Chris Pine as Wonder Woman's guide into the unfamiliar (to her) world of mortals, and even if it does feel a bit like typecasting to have Danny Huston as another comic book movie villain (since he already played a human foe to a super-powered individual in the first Wolverine movie in 2009), hopefully he works out as a bad guy in the final film proper. Point being, there's oodles of elements in this excellent new Wonder Woman trailer that have me hyped for the first Wonder Woman feature film!
Posted by Douglas Laman (NerdInTheBasement) at 11:17 AM