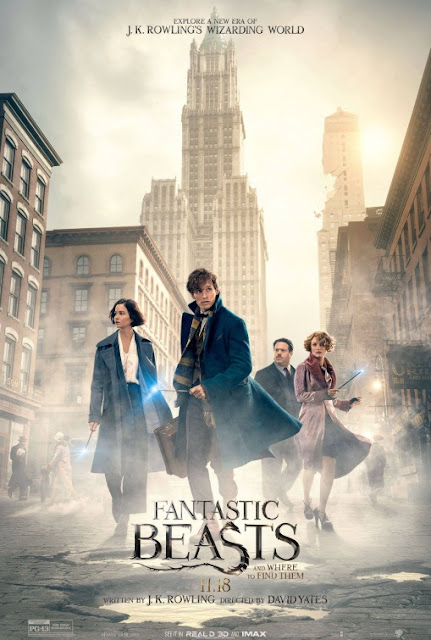 There's quite a bit that occurs in Fantastic Beasts And Where To Find Them, lots of plotlines that transpire in a two-hour running time, loads of magical creatures to meet and new characters to get to know. Despite the large amount of new content lumped onto the audience, it's surprising just how little of this new corner of the Harry Potter universe manages to really register. There's really not a unique tone that this production aspires to, nor are the distinctive time period or famous location (New York City) used to their fullest potential. Do not be mistaken, there are elements for sure in here that are fun or interesting, but the problem is most of the best aspects of Fantastic Beasts are either on the margin of the plot proper or don't get enough screentime to match their fullest potential.

It's also a massive issue that the majority of the movie is in service of an exceptionally bland protagonist, Newt Scamander (Eddie Redmayne), a wizard who loves unique beasts and travels around the globe with a horde of magical critters all contained in his equally magical briefcase (which is like Snoopy's doghouse in that it looks tiny on the outside but is huge on the inside). Newt has come to New York City in the year 1926 and finds that the practices of the American wizarding community is quite different from the wizard-based Eurapeon world, particularly in that the possession of magical beasts is forbidden. That makes things complicated when a couple of Newt's titular Fantastic Beasts escape just as some of malevolent magical force is running around New York causing trouble for magical and non-magical beings alike.

These turn of events spark in Newt....not much really. He's a pretty boring static character who doesn't grow one bit in his adventures in this movie and has no real likable personality to speak of. As a huge admirer of J.K. Rowling's work, I must be entirely honest and say that I'm truly shocked how badly her screenplay bungles making Newt even a remotely interesting character. He's this individual devoid of personality or any internal struggle that factors into the actual plot of Fantastic Beasts And Where To Find Them. And then there's Eddie Redmayne's performance, which just further compounds the problems with Newt as a character. Redmayne plays Newt like a shy schoolboy, a timid fellow whose head is always hunched down and who never raises his voice above a whisper. Problem is, nothing in the script seems to suggest Newt has much of a personality at all, let alone the one Redmayne is blatantly conveying in his physical performance.

For instance, Newt has no trouble conversing with other characters on a verbal level in any of the many dialogue exchanges Newt carries on and when he starts using sporadically using his various creatures and/or a wand to fight the real antagonists of this story, he has no problem switching over into generic bad-ass mode. Between Redmayne's one-note sullen performance, the bizarre lack of concrete personality given to Newt on a screenwriting level and the way various plot points just have him do whatever the story at the moment requires, it's no wonder Newt Scamander ends up being a real poor lead character for this tale. The requisite love interest for Newt, Tina (Katherine Waterston), fares little better as a character (Though there's one or two attributes to her that suggest she could be something interesting in a better film), meaning the two leads of our story can best be summed up as "poorly-realized".

Perhaps the worst part about being stuck with two flat-line lead characters is that there are interesting supporting players romping around in this story, most notably Queenie (Allison Sudol), the mind-reading sister of Tina, and a non-magical comic relief character Jacob (Dan Fogler). There's also the best-realized individual in the whole story, the troubled youngster Credence (Ezra Miller). Why couldn't these three have gotten more screentime to let their well-realized personalities shine instead of having to very much play second fiddle to the exceptionally monotonous Newt? Surely they could have cut out extraneous characters like the guy Jon Voight played in favor of more time with Queenie and Jacob, who really do liven up the movie once they become at least notable players since they actually have some vibrancy to them (though they both get awkwardly sidelined once the climax comes along).

J.K. Rowling's script also comes up short in terms of writing when it comes to actually laying out a cohesive narrative for all of these various characters and storylines to live in. Credit where credit is due, a good chunk of the cast (though sadly not our lead characters) do have clear motivations and the plot overall gets considerably better in the second half when something resembling an actual narrative throughline is established. But that first half is such a slog, full of information delivered in a clunky fashion as well as a tone that zig-zags all over the place. For instance, at one point Fantastic Beasts transitions from an intense darkly-lit scene depicting a mother beating her adopted child to wacky antics involving Newt and Jacob trying to nab a magical rhino-like beast at the Central Park Zoo. It's an odd fluctuation in tone that doesn't work and even in the better second half of the story plenty of individual plot elements don't gel together well. Most notably, Newt doesn't really factor into the climactic battle one bit, mainly because he has no internal struggle or concrete personality that can factor into the finale in a substantive way, he just comes off more like an afterthought in the climax of his own movie, particularly when the whole thing closes down with some obvious table-setting for those four sequels.

The over wieldy ensemble cast reside in New York City in 1926 and sadly neither the distinctive location nor time period get fully utilized to their maximum potential from a visual perspective. Just as director David Yates went overboard with blue color grading in his other 2016 blockbuster The Legend Of Tarzan, one singular color overrides the visual scheme of Fantastic Beasts. This time, it's a murky gray color that overruns the production, which leads to the various environments in the movie just blending together as well as the film feeling far less visually effervescent as it could have been considering all the material from this decade they had to work with. There's a lot of similarly lackluster content like that in Fantastic Beasts And Where To Find Them, a movie that has a couple of good aspects (like some strongly realized supporting characters) in service of an uninspired visual scheme, a sloppy narrative and tedious lead characters that make it a lackluster return to this magical world.
Posted by Douglas Laman (NerdInTheBasement) at 2:39 PM