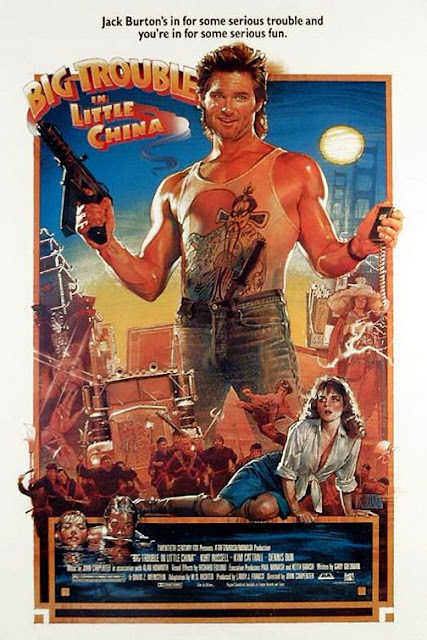 To look at the career of director John Carpenter in an in-depth manner is to realize that this guy was nothing if not tonally versatile in the work he produced. The creepy horror film Halloween launched his vocation as a filmmaker into the stratosphere, while the 1982 effort The Thing returned Carpenter to the horror genre with plenty of newfound science-fiction elements to keep things fresh. John Carpenter's 1986 feature Big Trouble In Little China is a bold departure of either of those previously mentioned movies in a myriad of ways, not only in the way it constantly uses Eastern and Chinese imagery but also in its more zany light-hearted atmosphere.

Basically, this entire movie is director John Carpenter and writers Gary Goldman & David Z. Weinstein placing a fish-out-of-water everyman protagonist (Jack Burton) into a heightened sorcery-infused blockbuster narrative and having an absolute blast juxtaposing those contrasting elements. And, what do ya know, I also had a blast watching the results of their efforts unfold on-screen. Now, as for that guy named Jack Burton (Kurt Russell, a John Carpenter regular), he's merely a truck driver who stops by to gamble with an o'l pal Wang Chi (Dennis Dun).

A seemingly ordinary day almost immediately transpires into something quite far from that once Wang see's his fiancee Miao Yin (Suzee Pai) being kidnapped. Wang and Jack attempt to follow the kidnappers but it isn't long before the identity of the abductor is revealed to be Lo Pan (James Hong), a foe who plans to use Miao as a crucial part of his plan to obtain a mortal form. Now Jack and Wang must march forward, with more than a little help, of course, from the likes of Gracie Law (Kim Cattrall) to save Miao from the clutches of Lo Pan

The 1980's are famous at this point with having hordes of action movies headlined by steel-jawed macho men who were never without a one-liner, a weapon or unfailing brute force. Jack Burton is basically walking-talking refutation of that archetype, constantly being out of his league and more of then than not bumbling his way through the dangerous situations he finds himself in like a member of the Three Stooges. In terms of his actual personality, he's akin to a prototype version of Peter Quill from Guardians Of The Galaxy, a fictitious figure whose 2014 big screen incarnation owes more than a tip of the hat to Mr. Burton. Just like Quill, the actor behind this characters brings a lot to the table, Russell can pull off a fraudulent sense of sturdiness like few others can and his timing with certain pieces of humorous dialogue or action beats is impeccable.

Jack Burton as a character isn't the only aspect of Big Trouble In Little China that seems to share similarities with films that were then yet to be released. The way this movie just fully embraces every nook and cranny of high-concept sorcery based cinema seems to channel the spirit of The Fifth Element. Just as that 1997 Luc Besson movie fully wrapped itself up in the most stylized science-fiction trappings you could imagine, Big Trouble In Little China dives in head-first into throwing every sort of fantasy trope it can conjure up at the viewer and then ratcheting it up to eleven. Cool animatronic monsters? Sure! Laser-bolt battles? Why not! A crucial wedding that serves as a ticking clock mechanism within the plot? How delightfully old-fashioned!

I wish some members of the supporting cast (like a journalist looking to grab the scoop on the fantastical events transpiring) were as distinctive as the leading man and exceptional production design, and there's a similar underwhelming quality to the climactic duel between Jack Burton and Lo Pan, if only because the final move on Burton's part is missing some sort of set-up necessary to make it truly feel impactful. Thankfully, those gripes don't take away from the tremendously wily and fun heart beating within Big Trouble In Little China, which is a great showcase for the talents of Kurt Russell, John Carpenter (who puts in another top-notch score here) and criminally underrated character actor James Hong.