Arrival Is An Excellent Demonstration Of The Power Of Visual Storytelling 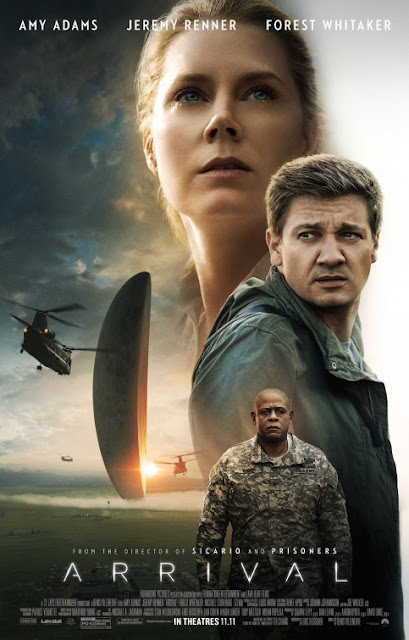 We've had a lot of alien invasion movies over the decades, but the best ones are those that carve a distinct tone and perspective in their narrative, the movies that seek to do something more than just have aliens blow stuff up. Sometimes ya get the anarchic glee of Mars Attacks!, other times you get the post-9/11 allegories of War Of The Worlds. So what is Arrival's particular approach to the alien invasion subgenre? Intimacy, honestly. Just in the way the movies shot alone suggests a sense of the filmmakers wanting the audience to become familiar with its protagonist and connect with her on her journey of discovery.

Intimacy isn't a bad theme to highlight in a movie all about connecting and communicating with completely unfamiliar individuals. The big science-fiction hook Arrival is tied down to is that 12 alien ships have come to Earth and parked at 12 different locations across the planet. Now, attempts are being made to try to communicate with these newfound beings and find out their intentions for coming to our planet. Dr. Louise Banks (Amy Adams) is one such person hired for the job of helping to establish a line of communication with these aliens given her massive amount of experience regarding linguistics.

The uncertainty regarding the intentions of these alien visitors hovers over Arrival for so much of its running time and is compounded by the visual scheme given to the alien visitors. It's hard to imprint an in-movie tonal intention of the design of the aliens ships in that the color and shape of the ship, for instance, don't look inherently threatening nor look naturally inviting. That visual choice keeps the suspense rolling and it makes the aliens preferred form of transportation look truly alien and the same goes for the interior room where humans are allowed to communicate with these other-worldly organisms.

Everything in here looks and feels very much not of this planet, it's such a bold but stunning choice in terms of production design and set design. There's so much visually in Arrival like that, pieces of imagery that just resonate with you on a deep deep level and immediately bore themselves into your skull. I love how many times the film just eschews dialogue for extended shots that allow the scenery or visuals to simmer with the viewer. The power of visual storytelling is incredible and Arrival wields that power in such emotionally gripping ways. Plus, it works so well for this individual storyline, which grapples with a way to communicate with heretofore unknown alien creatures who communicate via visual symbols.

Frequently using dialogue-free sequences underscores the importance of visual communication both within the movies story and in the way Arrival is conveying ideas to its audience. And helping to bring those myriad of wonderful visuals to life is none other than extraordinary cinematographer Bradford Young, who excels in selling grandeur when need be and also succeeds at getting to the very human heart of Arrival. Now this is a component of Arrival that is very much carried by the lead actor, Amy Adams, and in case you couldn't tell at this point, this movie is pretty much stacked in terms of talent all across the board.

Now, it's been nearly a decade since Amy Adams popped out of a New York City manhole and solidified herself as one of the best actors working in American cinema. There's versatility in the kind of work she does, she can work in any kind of tonal environment you place her in (sans those Man Of Steel movies she's been utterly wasted into a criminal degree). And in Arrival, she makes for the perfect audience point-of-viewer character to travel down this story with. Whatever mood Louise Banks is struck by in this incredible scenario unlike anything else mankind has gone through, Adams makes it believable. Her characters victoriousness at making a major communication breakthrough is sold just as authentically as the more downtrodden moments Louise experiences in this tale.

Between this and Sicario, it's pretty apparent that director Denis Villeneuve is one helluva filmmaker and one who's got his finger on the button in terms of ensuring that his emotionally resonant motion pictures tap into the zeitgeist in compelling ways. Sicario examined the war on drugs and the humanity lost in the brutality of the conflict and now Arrival has come out in the wake of the Trump presidency and boy does it feel timely as all out, particularly in the way that it reminds us all, even in these dark times, beautiful art can endure. Go see Arrival and prepare to realize that the hype for this title is real, it is indeed so gloriously real.
Posted by Douglas Laman (NerdInTheBasement) at 10:13 AM