Wayne's World Is Frequently Pleasant Though It Doesn't Quite Reach The Heights Of "Excellent!" 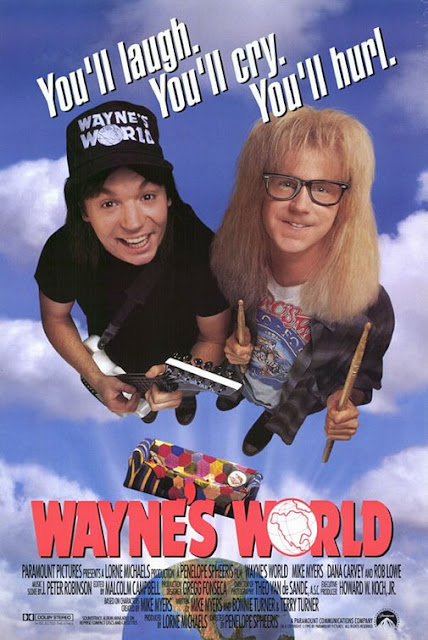 Movies based on recurring characters on Saturday Night Live are basically a thing of the past in the 21st century (the only entries in this subgenre since 2000 are The Ladies Man and MacGruber), but they were all the rage in the 1990's as immediate efforts were made to replicate the box office success of Wayne's World. The likes of Coneheads or Stuart Saves His Family (or even a direct Wayne's World follow-up) couldn't come remotely close to the box office returns of Wayne and Garth's first theatrical outing, which has emerged as one of the more quoted and beloved comedies of the 1990's.


My first time ever viewing Wayne's World left me understanding why people were so charmed by the film, even if I found the feature itself to be just alright overall. For those not in the know, Wayne (Mike Myers) and Garth (Dana Carvey) are two music-obsessed adults who do a public access show in Wayne's parents basement. They get an offer to do a high-profile version of their show by a sleazy executive (played by Rob Lowe) and fame and fortune seems to be theirs! Ah, but plenty of turmoil is in store for the duo, particularly when it comes to Wayne's infatuation with singer Cassandra (Tia Carrere).

It's the age-old rags-to-riches tale told through the lens of early 90's slacker-hood. You can probably guess where the plot is going, right down to exactly when in the story Cassandra and Wayne will experience a major rift in their relationship, which takes some of the zip out of the plot to be sure. There is some clear cleverness on display in the humor though, namely in the incorporation of more meta-gags. Wayne and Garth frequently talk to the camera and make all sorts of observational wise-cracks, including an extended product placement bit and an Oscar Clip moment that are the comedic high points of the motion picture by far.

With the benefit of hindsight, it's interesting to note how both of the headlining actors here got their careers as leading comedic men derailed by early 21st-century comedy projects (The Love Guru for Mike Myers and The Master Of Disguise for Dana Carvey). It's a pity those films damaged their careers so badly considering they do fine work here, especially in their chemistry bouncing off each other. It also must be said that there's a charm to the amiable banter between the two, a nice contrast to how many modern-day male comedic duos thrive on abrasive "BRO!!"-ness that gets immediately grating.

Actually, one of the key problems in Wayne's World may lie in how Wayne and Garth feel like the only fully formed or interesting characters in the story. Rob Lowe's sleazy executive has no other humorous traits to him aside from his disreputable personality and the other long-haired music-loving individuals that operate cameras for both of Wayne and Garth's shows are pretty forgettable creations. One or two caricatures pop in and out intermittently (like an obsessive ex of Wayne's and a murder obsessed diner owner) but they have no real impact on the plot and don't deliver enough laughs in their screentime to make up for their sloppy placement in the film.

Wayne and Garth's likable chemistry can only take Wayne's World so far and the fact that the majority of the supporting cast isn't very interesting may explain why the laughs sometimes feel like they're in low supply. To be fair, it's surprising a one-note SNL sketch could get this far as a movie and you can chalk that up to the amiable banter between our two leads. They're enjoyable personalities, especially when they're rocking out to Bohemian Rhapsody. If only the 1992 movie they inhabited was more consistent with deliveirng the laughs.
Posted by Douglas Laman (NerdInTheBasement) at 8:39 AM