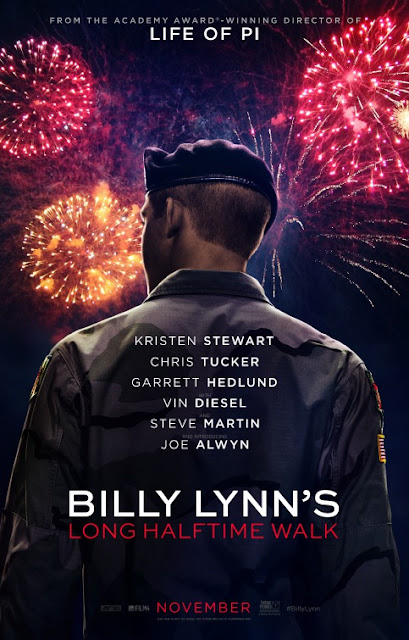 If there's one thing director Ang Lee loves, it's ambition. His 2012 mega-hit Life Of Pi was a small-scale movie that mostly confined itself to a boat starring an unknown actor and a CGI tiger while Brokeback Mountain is one of the most high-profile American movies to deal with the typically taboo topic of homosexuality. Even his foray into superhero movies, the 2003 Hulk film, has one of its core plot points revolve around spousal abuse and the effect that has on a young child's psychology. You give Ang Lee a box to play in, he's gonna think outside of it and then some, no question about it.

Unfortunately, Ang Lee's newest movie, Billy Lynn's Long Halftime Walk is ambitious, but mostly to its own detriment. It wants to say so much about soldiers, PTSD, the Heartland and so much more, but none of these ideas are given enough room to breathe. Some of it's actually kind of interesting but waaaaay too much of it is just plodding, never really digging deeper into the weighty themes it introduces into its story. As you might suspect, the titular character Billy Lynn (Joe Alwyn) is the lead character of this war-time tale, a soldier who's gained fame for a heroic feat he performed on the battlefield and now he and his whole squadron  are getting to be celebrated during the Half-Time show during a Thanksgiving 2004 football game in Dallas, Texas.

To be sure, Billy Lynn is a soldier and that's kind of it for his personality unfortunately. We're told he's a screw-up, though the kind where the audience thinks he's a scrappy chap all the same. Notice how the most notable example of his recklessness that we're told about is that he wrecked the car of his sister's fiancee after the fiancee ditched his sister after she was in a terrible car accident. There's little recklessness to be seen when he comes home from the war and we only get one brief glimpse of this kind of behavior on the battlefield. Hell, even his dynamic with a recently deceased sergeant (played with very real warmth by Vin Diesel in the best performance of the movie) doesn't get much time, they talk to each other two times in brief uninteresting conversations before the sergeant's tragic death. For much of the movie, Billy Lynn isn't reckless or really any sort of personality.

Mostly, Billy is around to hang out in the background interacting with the various celebrities who show up for brief appearances. That's another odd attribute of Billy Lynn's Long Halftime Walk, there's a number of big-name actors (Kristen Stewart, Steve Martin, Tim Blake Nelson and especially Vin Diesel) that show up for walk-on roles, to the point where it begins to feel like a Muppet movie, though I assure you it's more like Muppets From Space rather than The Muppet Movie. The plot of Billy Lynn's Long Halftime Walk is in such a rush to hop from one subplot to another that none of the numerous supporting characters get a chance to become fully-formed characters. The "talking-a-mile-a-minute" agent played by Chris Tucker remains just that for his entire duration of screentime, ditto for a sleazy rich guy depicted by Steve Martin. And don't even get me started on a shoehorned in subplot involving a cheerleader who falls for Billy Lynn, poor lady has to deliver the most cringe-inducing dialogue of the whole film.

It's a real shame so much goes awry in Billy Lynn's Long Halftime Walk because the moments that do work show that this could have been a truly special project. The best scene in the entire movie, hands down, is a tranquil moment where Billy, a fellow soldier and an employee working at the stadium talk about why they joined the military and how their civilian lives are so deprived of true meaning, they decided to re-enlist and go along with the Army because, in their own words, "What else is there?" It's an interesting dive into the mind of soldiers from lower-income areas who don't have many options for their future and it's the sort of thoughtfulness and concentration that the rest of Billy Lynn's Long Halftime Walk sorely needed.

I'll freely admit that I was a total pleb and saw Billy Lynn's Long Halftime Walk in merely 2D and 24 frames per second, since that's the format Sony/TriStar has made available for the majority of theatergoers across the nation. I cannot tell you if director Ang Lee's 120 frames per second style of filming actually worked obviously, but I can tell you that visually Billy Lynn's Long Halftime Walk is truly forgettable, though the overly shiny conditions of all the sets really stuck out in my mind for all the wrong reasons. This visual move is particularly hindering during the few times we switch into a shot that is supposed to be from Billy Lynn's POV. The look of the environments Billy is seeing are too clean to be real, they don't match the more realistic mood the rest of the movie is trying to convey and it takes you out of the film completely. There's sprinkles of something more interesting in there, but man, Billy Lynn's Long Halftime Walk just can't get seem to get itself running, especially in its final scene which must go down as one of the worst endings to a movie in 2016.
Posted by Douglas Laman (NerdInTheBasement) at 6:17 PM