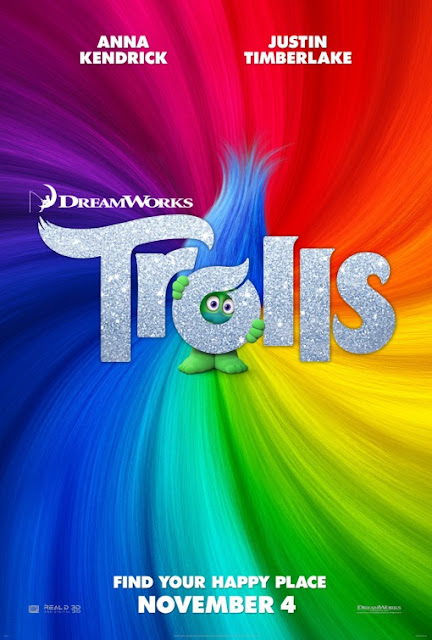 In the esteemed pantheon of movie adaptations of toys, Trolls can at least take pride in the indisputable fact that it's better than the Transformers sequels and Battleship. And amongst its DreamWorks Animation brethren, it's better than the last two Shrek movies! That's sort of the extent of the highest praise I can offer Trolls, a movie that exists solely to sell toys and albums and makes very little attempt to cover that up. Like, I'm not naive, I know there toy executives slobbering over the infinitely better movie Zootopia since that one had limitless potential for stuffed animals and the like. But there's at least a great movie there, so who cares if they make some toys off it?

Trolls begins and ends with the prospect of merchandising and it doesn't even have the decency to have some fun gags or memorable musical numbers in the meantime. The meager plot in this movie revolves around Princess Poppy (Anna Kendrick) being a high-ranking individual in the society of the Trolls, a perpetually happy species that loves hugs, dancing and singing. When a bunch of her friends are stolen by a villainous Bergen (a species that loves to eat the Trolls in order to obtain happiness), she's gonna need help from the exceptionally grouchy Branch (Justin Timberlake) to get her Troll friends back.

That's the odd couple dynamic that many animated family films have worked wonders with, but the pairing of Poppy and Branch feels one-note and lacking in entertainment despite a good vocal turn from Anna Kendrick. It might be because the arc of the duo is a one way street, wherein Branch must learn to be happy again and embrace music but Poppy doesn't grow on her own, she's a static character whose bubbly and loves glitter. That character in and of itself isn't bad, but it feels like a shallow and one-note depiction of the concept of happiness. Both Poppy and Trolls as a movie aren't so much wishing people would be nicer or be more positive but rather carry a desire for everyone to live in a delusional state of pervasive merriment.

Also hurting the lead duo's dynamic is that Justin Timberlake sounds oddly bored in his duties as a voice actor. The guys worked as a great actor before in David Fincher's The Social Network, so his acting chops aren't in doubt, but the world of voice acting is considerably different than physical acting and Timberlake just doesn't rise to the challenge here. His line readings seem flat in all the wrong ways and he sounds more distant than anything else in his turn as Branch. To be fair though, the dialogue he's given would be hard for any actor to make work, including a clunky dramatic line delivery that segues into him delivering his sob backstory that is astonishingly mishandled.

Praise deserves to be put upon the animation of Trolls, which does look quite nice and I appreciate the visual aesthetic choice to have the various creatures in the forest Poppy and Branch travel through look like they were assembled out of a scrapbook. It's mighty unique and lovely to look at, but unfortunately, we only spend the first half (at best) of the story there. Soon Poppy and Branch reach the village where the Bergen live and all those bold visual choices are tossed aside in favor of a more generic look that hews closely to medieval-era building structures and drab colors. I get that the Bergen are grumpy people in contrast to the peppy Trolls but did their civilization that we spend so much of the movie in have to be so visually unremarkable?

For those curious if there are more songs like that big pop radio hit Can't Stop The Feeling in Trolls, sadly, no. Trolls is mostly a jukebox musical that sporadically utilizes various tunes from the 70's and 80's like Hello and The Sound Of Silence. It's basically a jukebox musical, but only infrequently, it's weirdly uncommitted to being fully embracing that musical format. Whenever the characters burst into renditions of those songs, they're really uninspired in terms of both the tunes chosen and the song covers Trolls delivers. The only real inspired musical moment is the only fully original musical number (aside from Can't Stop The Feeling), Get Back Up Again, which has the optimistic Poppy trying to keep her spirits up whilst surviving an assortment of dangerous obstacles. Anna Kendrick performs the song well, the lyrics are humorous and there's some neat visuals in this pretty fun musical number. Unfortunately, Get Back Up Again is the exception rather than the rule in the rote Trolls, which needed more craft if it truly wanted to leave audiences as happy as the titular tiny creatures.
Posted by Douglas Laman (NerdInTheBasement) at 11:47 AM