Inferno Is So Bad I'm Not Even Giving It A Hell-Themed Pun. It Doesn't Deserve My Puns. 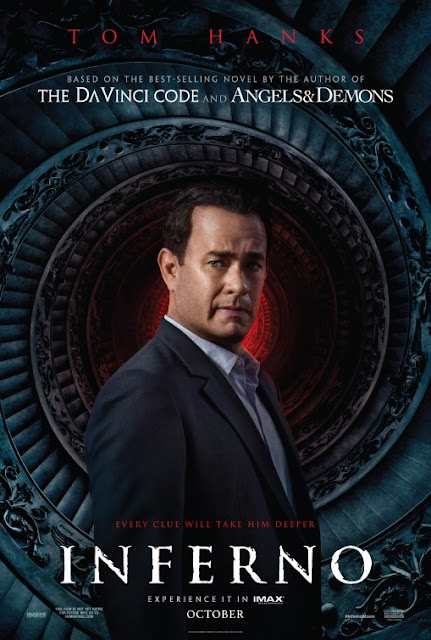 Just a few days after seeing The Handmaiden, a fantastic example of using plot twists to enhance plot lines and characters, here comes Inferno, whose entire purpose seems to be to serve as the nadir of what gratuitous story twists can accomplish. There is literally nothing going on in Inferno beyond two acts that plunge the viewer into complete confusion before revealing a final act that ceaselessly drops plot twists on the audience in the same way donuts were served to Homer Simpson in Hell in Treehouse Of Horror IV. Could this be the worst 21st-century movie Tom Hanks has starred in? Mayhaps people, mayhaps.


So, Robert Langdon is caught up in another wacky European-set adventure, this time waking up in a hospital bed in a foreign land with the last 48 hours of his memory erased and his prized Mickey Mouse watch missing. Soon, people are shooting at him and he only escapes via the help of helpful doctor Jyn Erso (Felicity Jones). Once he finds a safe hiding space, Langdon discovers he might be embroiled in a scheme by Bertrand Zobrist (Ben Foster) involving eradicating a larg e share of the human population by way of a man-made plague.

In order to stop such an apocalyptic event from occurring, Langdon and Jyn Erso must travel to various locations to do the o'l treasure hunt routine while being chased by assassins and the like. It was during one of these exploits that Robert Langdon makes mention of his claustrophobia, an element that got a lot of play in the original Da Vinci Code movie. It then occurred to me just how little continuity there is between these Robert Langdon movies. Langdon is such an ill-defined character that he doesn't really grow or carry recurring character traits between these individual films. For instance, his inability to believe in God that went nowhere in Angels & Demons isn't ever referenced here and no characters from the first two movies (aside from Langdon of course) are even referenced in Inferno.

That doesn't mean that Inferno is entirely a departure from its predecessors. All three of these movies have now had a key plot point revolve around an overtly helpful and good character turn out to be the main villain, a recurring trait whose repetitive nature undercuts the intended surprising nature of such a twist greatly. It also continues the franchise's proud tradition of lathering on the stupid in its plot twists, with Inferno reaching new heights in the levels of idiocy it charts. Acclaimed Hindi cinema legend Irrfan Khan is on hand to deliver the majority of the "SURPRISE!" plot points to Langdon as well as tepid one-liners that will surely be greeted by jeers across the nation.

As one big surprise followed another, none of them making all that much sense or enhancing the existing story elements, it dawned on me that Inferno has no purpose for being beyond just an excuse for Sony to exploit the Da Vinci Code brand name for some quick bucks at the foreign box office as well as a domain for story twists to replace actual characters and drama. Having not read the book this movie is based on, I can't say how much of this plot-related stupidity is down to screenwriter David Koepp (how did he get wrapped up in this disaster??) or if this all comes from Dan Brown's source material. No matter where it came from, what we get in the final act of Inferno is dumb enough both in its content and execution to make any sane human being want to throw their popcorn bucket at the screen in frustration. Hell, there's no explanation given to various mysterious plot points like Robert Langdon stealing the death mask of Dante Alighieri. Was he under a trance? Was he doing it under the influence of a shot of some sort of medicine given to him? The film never makes it clear why, maybe it's just one more enigma Inferno is throwing at the audience in hopes of viewers being too confused to notice the lack of coherency in the plot.

Some of the visual experimentation that came through in the camera angle choices in director Ron Howard's last movie, In The Heart Of The Sea, can be glimpsed at in the early sequences of Inferno that attempt to visually convey Langdon's disoriented mental state by way of him having visions of Hell on Earth. It's all very discombobulating in a bad way in the editing and the supposedly unnerving visions Langdon is experiencing just come off as tepid recreations of classical artwork by folks like Sandro Botticelli. Why didn't they use some of the truly weird and disturbing artwork made in this time period instead of rote images inspired by the concept of Hell you've seen before? then again, I suppose asking Inferno to be competent in any way shape or form would be asking too much of a movie this flat-out terrible.
Posted by Douglas Laman (NerdInTheBasement) at 9:18 AM