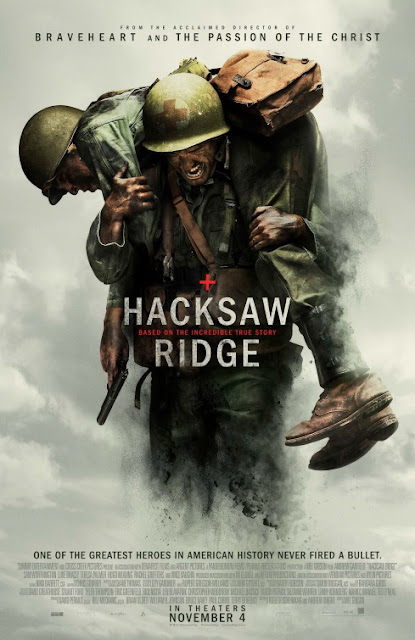 In an on-air interview with Stephen Colbert this past week, Mel Gibson made explicit mention that he felt that the act of suffering was a critical part of his religion, Catholicism. And that comes through loud and clear in Hacksaw Ridge, a World War II movie that makes sure to find plenty of time to linger on the kind of barbaric violence and grotesque casualties that occur in war. His devotion to his faith also manages to have a heavy presence in the movie by way of the lead characters strict adherence to the ways of Jesus Christ. It must be said, as a Christian myself, it is truly nice to see a movie with my theology at the center of it that's actually well-made and professional looking. This isn't a God's Not Dead type endeavor in terms of production value in other words.

To say Desmond Dawes (Andrew Garfield) is a kindly and gentle soul is an understatement. He's so genial and sweet in his cinematic incarnation that he makes Captain America look like Mel Gibson! After a traumatic childhood incident that nearly resulted in him accidentally killing his brother, Desmond lives his life by adhering to the words and commandments of Jesus, namely his proclamation that no man should kill his fellow man. When World War II comes around, Desmond decides to contribute to his country and still follow his personal religious-based beliefs by joining the army as a medic.

Unfortunately, once he gets into training, he learns he'll have to undergo training with a firearm in order to serve in combat, something that directly conflicts with his religious beliefs. From there, the various Military personnel belittle Dawes and his beliefs and the other soldiers Dawes is training with turn against him, turning Dawes into a figure akin to Vincent D'Onforio in Full Metal Jacket. And it is here that I think it's a good time to talk about our lead character Dawes, easily the strongest element of Hacksaw Ridge and one that could have easily become yet another symbol of Christian martyrdom that has been possessing Christian-based cinema in recent years such as in God's Not Dead.

Thankfully, Dawes comes off as a far more naturalistic creation and much of that must be credited to Andrew Garfield's performance, particularly just in the way he looks. Garfield in this movie carries a clean-shaven babyface face and calming eyes that make him like the human being equivalent of a puppy. No one likes to see a puppy get yelled at and, similarly, seeing Dawes thrown into all sorts of predicaments solely because of his beliefs get an added sense of poignancy by the physicality and "aw-shucks" body language Garfield brings to this part.

The script also gives Dawes a very warm and charitable personality that Garfield conveys with similar success that makes it easy to see why this person would flourish as a medic on the battlefield. He carries a very soothing presence that would be a welcome relief when one is nursing fatal wounds in a terrifying combat zone. Unfortunately, Dawes isn't the only person in this movie, and the various soldiers he interacts with run the gamut from "boring archetype" to "forgettable archetype" and actors like Luke Bracey and Sam Worthington just can't seem to muster up much of a presence to make them noteworthy. You know what kind of arc the stubborn soldier who thinks Dawes refusal to engage in violence is a form of cowardice is gonna have with our protagonist the moment he shows up on-screen and neither the execution of this subplot nor the performances of the rival soldier is strong enough to compensate for its narrative complacency.

And then comes an extended battle sequence at the titular location that reminded me, of all things, of The Hobbit movies. Just as in those movies the interesting lead character, Bilbo Baggins, had a tendency to just vanish from the proceedings once the CGI-coated action kicked in, Desmond Dawes is mostly off-screen as an overlong war sequence goes on and on solely so Mel Gibson can indulge in a large-scale homage to Call Of Duty. The fact that the character of Dawes is this movies best asset is reinforced once the battle concludes and its up to Dawes to save numerous wounded soldiers left behind on the battlefield all while evading enemy forces without a single weapon on his person. Now this is a suspenseful character-driven sequence that's easy to get emotionally invested in and is exceptionally well-filmed and edited to boot! Narrowing the focus of Hacksaw Ridge down to be all about Dawes and scenes like this one instead of indulging in gratuitous over-the-top bloodlust certainly would have made for a more cohesive movie ,though Hacksaw Ridge still manages to be a solid overall motion picture about sticking to one's belief that owes much of its emotional resonance to a strong lead turn by Andrew Garfield.
Posted by Douglas Laman (NerdInTheBasement) at 9:54 AM