Believe The Hype, Moonlight Is An Incredible Motion Picture Experience 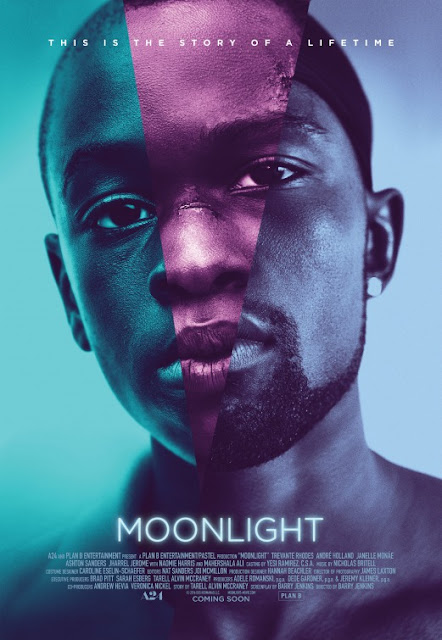 Recently, I engaged in a conversation regarding films that had an impact on the world around them. Think of how Casablanca was an artistic outlet for refugees whose voices were being silenced in the all too harsh real world. I feel fairly confident in saying that future discussions centered around this topic will have to include Moonlight for so many outstanding reasons. Moonlight isn't just a phenomenal motion picture (though it very much is one, make no mistake), it's something more than that. It's a beautiful portrait of a man trying to grow up in a society unwilling to accept him for who he is, told with the kind of commanding filmmaking that lodges itself into your mind and never escapes.

The man in question is Chiron, a fellow whom Moonlight chronicles through three different stages of his life. First, we see him as a young boy (played by Alex Hibbert) whose garnered the nickname "Little". Our introduction to Chiron in this stage of his life is him being chased by an assortment of bullies. He eventually finds solace in a small abandoned room, where he sits in the silence and hopes for some sort of solace. There's nowhere for him to go; outside there are bullies waiting to taunt him and spew homophobic insults at him while his home has its own set of challenges in the form of his drug-addicted mother. His existence at this young age is the very definition of the axiom "Caught between a rock and a hard place".

But even amidst the darkness, some light can pierce through, and some form of, however brief, salvation comes from Juan (Mahershala Ali) and Teresa (Janelle Monae). It is in the depiction of both kindness and cruelty in these opening scenes of Moonlight that perhaps the greatest trait of this incredible movie emerges; its authenticity. The barbarity tossed upon poor Chiron at a young age doesn't feel glossed over, it's more akin to how Charles M. Schulz depicted cruelty amongst children in the Peanuts comic strip, a brutally accurate depiction of how vicious youngsters can be. Alex Hibbert eschews dialogue for the majority of his on-screen appearance and his body language and physical mannerisms that manifest as a response to the onslaught of wickedness he constantly receives has a similarly true-to-life vibe to it.

Thankfully, there is a similarly genuine nature to the warmth Juan and Teresa give to Chiron and it's amazing how well-crafted all of the dialogue-heavy scenes between these characters, as well as any given characters in Moonlight, are. The beautiful score by Nicholas Britell is typically forgone in these moments, allowing the dialogue emanating from the characters to be the only audio heard which allows every word to carry its maximum emotional weight. Moonlight is, at its core, a story that gives an outsider to society a chance to be showcased, a chance to be depicted as the human being he really is, so it's a brilliant move that every word our protagonist (and the characters that surround him) say is allowed to be as impactful as possible.

For the rest of the running time, we get two individual storylines told in Chiron's teenage years (where he's played by Ashton Sanders) and in his time as an adult (where he's played by Trevante Rhodes), each depicting him coming to terms with his own homosexuality in differing ways. The small-scale intimacy of all three cinematic depictions of these passages of Chiron's life recall the works of master filmmaker Richard Linklater, most notably in the way that both Linklater and Moonlight's screenwriter/director Barry Jenkins understand how important small-scale interactions in day-to-day life can help form the very fabric of a person. Every day, Chiron is harassed in ways big and small solely on the basis of him not conforming to societies conventional and extremely narrow concept of what constitutes masculinity. It's pervasive, it consumes him in his pre-adult years and Jenkins understands completely what kind of an effect that sort of cruel treatment would have on a human being.

Moonlight also happens to be as beautiful in its visual prowess as its emotional resonance, with director Barry Jenkins and cinematographer James Laxton displaying an incredible skill behind the camera. For instance, the recurring use of the color blue (which does hold some personal importance to Chiron) is a subtle but brilliant recurring visual motif in the story. But it's in the repeated use of close-up shots that Moonlight manages to further excel on an emotional level, with close-up shots of people's faces from the front being frequently used throughout the movie. Sometimes when this type of shot is applied to non-Chiron characters, it simulates the experience of us looking through Chiron's eyes and the movement or angle of the camera in these shots says a lot about the interior emotions Chiron feels about that person in that particular moment.

And then when the camera rests on a close-up of Chiron's face, it allows the audience to grasp a lifetime of expression just from the way his face looks in any given frame. The exemplary acting given by the three actors portraying Chiron at various stages of his life come in particularly handy whenever these shots gets utilized, since all three actors excel at conveying so much in the most subtle facial expressions or just the way their faces are positioned. Aching, longing, pain, it's all there in Chiron's eyes, This type of shot allows all those emotions to be so clearly seen and only furthers one's emotional investment in seeing where Chiron goes next as a human being.

It is rare to see any sort of movie willing tackle the concept of masculinity and the prospect of homophobic bullying in a modern day environment as well as the very idea of coming to terms with one's homosexual identity, let alone in the kind of gloriously extraordinary way that Moonlight tackles such concepts. Yes, it is easy to see Moonlight cropping up in future conversations regarding films who managed to be important in the world. Director Barry Jenkins and his top-notch cast & crew haven't just crafted a masterpiece here, they've put together a movie that emphasizes the humanity in the people society deems outsiders. Take it from me, we'll be talking about the miraculous movie that is Moonlight for years to come.
Posted by Douglas Laman (NerdInTheBasement) at 8:55 PM