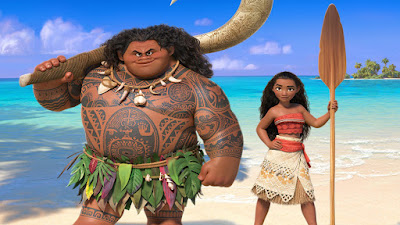 Well now, if this wasn't a hustling and bustling Thanksgiving weekend at the box office. In fact, this was the fourth biggest Thanksgiving weekend of all-time, with one massively successful new release and some strong holdovers paired up with three wide release newcomers that failed to gain traction in the slightest.

Of course, the talk of the town is the big success of Moana, which grossed a great $55.3 million, the third best opening weekend ever for a Thanksgiving release behind fellow Disney cartoons Toy Story 2 ($57.3 million bow) and Frozen ($67.3 million bow). Since it debuted on Wednesday, Moana has managed to gross $81.1 million, the second-biggest 5-day Thanksgiving weekend box in history. Also worth noting is that Moana being number one at the box office this weekend means that this is the first Thanksgiving weekend since 2007 (when fellow Disney musical Enchanted reigned supreme) to have a new release and not a holdover title be the number one movie at the box office. No shocker this one did so well considering Disney's been on fire when it comes marketing their in-house animated features and ads made sure to emphasize the various elements (comedy, action, big name voice talent) that usually lead to success in the world of animated family films.

Where will this one go from here? Barring a Good Dinosaur sized second weekend plunge, Moana should have no trouble holding well enough to retain its screens over the massively lucrative Christmas holiday break even with competition from Sing in its fifth weekend of release. Tangled did a little over four times its opening weekend six years ago and that seems like a good range for Moana to hit when all is said and done, which would give it a final domestic cume in the $225-230 million area, a terrific total for the animated family movie. One final box office related thought: it appears this one will outgross Aladdin to become directors Ron Clements & John Musker's biggest movie of all-time domestically.

Fantastic Beasts And Where To Find Them held surprisingly well in its second weekend of release, adding $45 million to its domestic cume (a much smaller than expected 39% decline from its opening weekend) that now stands at $156.2 million. Looks like Newt Scamander and pals are gonna cross $200 million with ease and should end their domestic run in the neighborhood of $225-230 million. With over $315 million garnered overseas already, Fantastic Beasts is likely gonna crack $700 million worldwide, a sublime accomplishment for the feature.

Fellow November 2016 blockbuster holdover Doctor Strange came in at third place this weekend, grossing another $13.3 million, a 25% decrease from last weekend. That's a slightly larger dip than the 21% decrease seen by Thor: The Dark World over the Thanksgiving frame three years ago. Stephen Strange has now grossed $205 million domestically and looks to be angling for a domestic total just in the $230-235 million range. Doctor Strange also overtook Iron Man to become the biggest single hero introduction movie in the Marvel Cinematic Universe at the worldwide box office.

A major dud debuting this weekend was Allied, an $85 million World War II drama that grossed only $13 million in its opening weekend and $18 million over its first five days of release. For Brad Pitt led movies, this three-day opening weekend is just 5% ahead of the opening weekend of Sleepers (which was an ensemble effort) and 7% behind the debut of Seven. Actually, only three movies that Brad Pitt has appeared in in the 21st century and opened in wide release (The Counselor, Sinbad: Legend Of The Seven Seas and Killing Them Softly) have had worse opening weekends. As for director Robert Zemeckis, it's about middle of the road in terms of all of his opening weekends, just above the bow of Death Becomes Her but way below the debuts of his biggest hits.

Allied had a couple of marketing-related obstacles hanging in its way, namely that Brad Pitt was paired up with Marion Cottilard in Allied, a great actress who doesn't quite have box office clout or widespread recognition. Plus, the more mixed marks it received from critics meant it likely lost business to the numerous other adult-skewing dramas in the marketplace like Arrival and fellow World War II drama Hacksaw Ridge. Considering the large amount of new releases headed our way in the next few weeks, it'd be shocking if Allied had any kind of legs at the box office. Hell, I'd be shocked if it got past $40 million domestically, which would make it one of the lowest-grossing Brad Pitt headlined movies in recent memory.

Rounding out the top five was Arrival, which racked up another $11.2 million (a small 7% decrease from last weekend), bringing its domestic total to a strong $62.3 million, taking it past the lifetime domestic gross of director Denis Villeneuve's 2013 effort Prisoners in just 17 days. Trolls obviously felt the brunt of Moana this weekend, as the family film plummeted 41% from last weekend to gross another $10.3 million. That's a much larger fourth weekend dip than the ones experienced by fellow early November family films like MegaMind (21%) and The Peanuts Movie (26%) and now means Trolls has grossed $135.1 million in 24 days. By contrast, Almost Christmas had an impressive increase this weekend, going up 5% this weekend to add $7.6 million to its domestic cume that now stands at $36.6 million.

We now come to Bad Santa 2, a new release that failed to gain all that much traction. Grossing just $6.1 million in its opening three-day weekend (and only $9 million since it debuted on Wednesday), Bad Santa 2 was down 50% from the opening weekend of its predecessor from 13 years ago. Considering how poorly put together the trailers were, as well as the fact that it just looked like a retread of the first movie, it's no surprise this one failed to make an impression at the box office. If this one gets past $20 million domestically, I'll be amazed.

Hacksaw Ridge came in at ninth place in its fourth weekend, grossing $5.4 million (an 18% dip from last weekend) and bringing its domestic total to $52.2 million. Failing to bounce back over the Thanksgiving holiday was The Edge Of Seventeen, a great movie that dipped 38% this frame and only added $2.9 million to its underwhelming $10.2 million domestic gross. Loving expanded to 421 theaters this weekend and grossed $1.6 million for a per-theater average of $4,017. Loving has now made $4 million domestically, putting it just ahead of the $3.7 million final domestic gross of Jeff Nichols' other 2016 movie, Midnight Special.

All the way down in twelfth place was Rules Don't Apply, which became one of the biggest box office bombs of 2016. Grossing only $1.57 million at 2,382 locations for an anemic per-theater average of only $661, Rules Don't Apply had the sixth worst opening weekend ever for a movie opening in over 2,000 theaters and had the worst opening weekend for a 20th Century Fox wide release since the March 1999 film Ravenous. The marketing for this one was basically nonexistent beyond a poorly edited trailer, but even then few could have expected Rules Don't Apply (which has grossed $2.1 million since it opened on Wednesday) to perform this badly.

Two of last weekend's bigger box office duds had major plummets this holiday weekend as they lost the majority of their showtimes to make way for the numerous new releases this week. Bleed For This lost 60% to gross $949,898 for a 10-day domestic gross of only $4.2 million. Such a plummet looks positively amazing compared to how hard Billy Lynn's Long Halftime Walk plunged this weekend, with the new Ang Lee movie grossing only $210,000, a 77% drop from last weekend, in 1,176 theaters for a disastrous per-theater average of only $179. Billy Lynn has only grossed $1.59 million domestically and likely won't get much farther than that. Between those two releases at eighteenth place was Nocturnal Animals, which expanded to 126 locations which resulted in a solid $816,000 second weekend sum for a per-theater average of $6,476. Nocturnal Animals has now grossed $1.6 million.

Two films got off to major starts in limited release this weekend. The biggest of these was Lion, which grossed $128,368 at 4 locations for a per-theater average of $32,092. That's the biggest per-theater average of the entire weekend and the twelfth biggest opening weekend per-theater average of the year for a limited release. However, that is an opening weekend that's below the bows of the majority of dramas (like The Imitation Game, Silver Linings Playbook and Carol) The Weinstein Company has launched in this timeframe in years past. This is, however, a similar debut to Philomena, a title the studio debuted over this same time frame that went on to gross $37 million domestically, so there's certainly still plenty of potential for Lion to prosper at the box office. Meanwhile, Miss Sloane grossed $63,000 at 3 locations for a per-theater average of $21,000, a decent bow before this one goes into wide release on December 9th. How Miss Sloane will play in more theaters is anyone's guess at this point.

The Top 12 movies this weekend grossed $173.9 million, about on par with this same weekend from last year when the final Hunger Games led the box office for the second time in a row.
Posted by Douglas Laman (NerdInTheBasement) at 10:44 AM