A New BFG Trailer Has Arrived For All Of Us Human Beans to Watch! 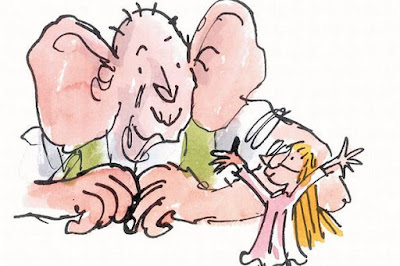 Roal Dahl is a trick author to adapt to film. His works were so full of flights of the most fantastical kind of fantasy that it can be difficult for certain filmmakers to adapt such works into cohesive features. Tim Burtons Charlie And The Chocolate Factory, for instance, does not work in any shape or form any way you slice it. As its own thing, it's a repetitive slog sorely lacking in whimsy or fun, while as an adaptation it's borderline infuriating. Like I said, the books of Dahl thrived on the nonsensical and all of that vagary found in the text is tossed aside so that the root of all of Willy Wonka's idiosyncrasies are....daddy issues. His father was dentist ya see. Not only did it go against the spirit of the source material, it was an eye-rolling plot development take in the context of just the film itself. Screw that garbage.

By contrast, Wes Anderson flourished with Fantastic Mr. Fox, mainly because this is a guy whose used to incorporating the odd and quirky into his works. He made a masterpiece that simultaneously honored the original work and worked like gangbusters as its own entity. All of this is a long-winded way of saying that the past works of "obscure" filmmaker Steven Spielberg give me hope he can pull off The BFG (thats's Big Friendly Giant) as a film adaptation. For all of you human beans who may have missed the initial teaser back in December and are curious what his take on The BFG may look like, you're in luck! Disney and Amblin released a new trailer for The BFG today that you can watch below!

Well that looks promising as all out! First off, Mark Rylance looks perfect as the titular character, and the CGI enhancements to his physical features actually look solidly incorporated (which really is a major compliment considering the kind of lackluster CGI that can be seen in certain movie trailers). I also love how, unlike a lot of other trailers for family movies, this one doesn't shoehorn in jokes, loud noises or random farting in a desperate bid to keep the attention of children. Instead, the lovely looking world of Giant Country, a mystical aesthetic and the dynamic between Sophie and The BFG are what the trailer chooses to emphasize.
Also, let's take a moment to recognize that cast this movie has assembled! In addition to Academy Award winner Mark Rylance as the titular lead, Bill Hader and Jemaine Clement are in here as evil giants (on a sidenote, those antagonistic giants that we get a glimpse at super briefly are the only CGI effects here that give me pause, they're giving me some Jack The Giant Slayer flashbacks), plus Penelope Wilton as The Queen Of England and Rebecca Hall! And did I mention a little guy by the name of John Williams is doing the score? Hopefully The BFG is more along the lines of Fantastic Mr. Fox than Charlie And The Chocolate Factory in the domain of Roald Dahl film adaptations and this great trailer makes that hope of mine all the more fervent.
Posted by Douglas Laman (NerdInTheBasement) at 11:39 AM