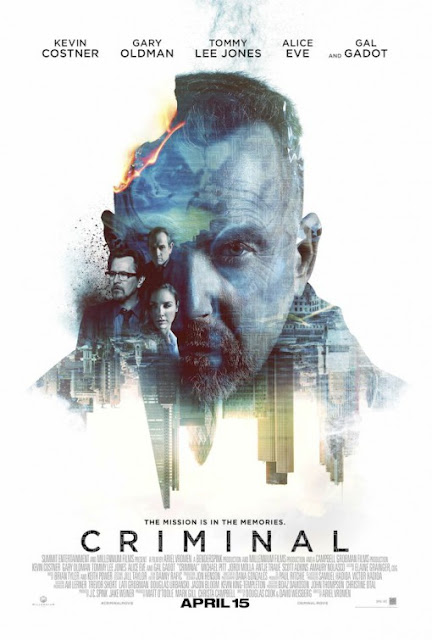 OK, so, the plot for Criminal is more than a bit dense, so allow me to parse through it with a synopsis. Jericho Stewart (Kevin Costner) is a criminal serving a life sentence who, thanks to being thrown out of a car as a child, basically has no frontal lobe. The movie uses this as an excuse for why he has no moral compass or any knowledge of what emotions are. That lack of a frontal lobe is also why Jericho specifically is the perfect candidate for a procedure wherein scientist Dr. Franks (Tommy Lee Jones) will inject Jericho with the memories of the recently deceased secret agent Bill Pope (Ryan Reynolds), who tragically passed away while doing the cinematography for The Jungle Book. High-ranking military official Quaker Wells (Gary Oldman) hopes that, with Pope's memories in Stewart's body, he'll able to retrieve the whereabouts of a man who has control of an arsenal of nuclear weaponry.

Unfortunately, Jericho proves to be less than trustworthy and he soon escapes, causing mayhem in his wake. But he also begins to feel the tug of the light, to quote Kylo Ren, as Bill Pope's memories of playing with his daughter, Emma (Lara Decaro) falling in love with his wife, Jill (Gal Godot) and shooting the breeze with Edgar Wright make him realize there may be more to life than just committing violent acts against innocent civilians. And so, with the clock ticking until all-out nuclear war occurs, Jericho soon realizes he may be the only one who can save the world. But will he able to be more morally upright long enough to protect the planet as well as care for the grieving Emma and Jill? In case you couldn't tell, there's a loooooooot going on in this movie and that is it's major flaw (among many other problems, rest assured).

Criminal veers from one tone to another constantly, sometimes even in the same scene. Sometimes, such as a scene where Jericho lights two non-antagonistic police officers and an innocent passerby on fire, it wants this to be Kevin Costner's Taken, just two hours of the lead actor breaking necks and asking questions later. But then it dives head-first into sentimentality when Jericho encounters Bill Pope's family. Here, Emma teaches him how to play the piano, he makes waffles for the family and Jill just lets this guy spend extended time with her daughter despite the fact that Jericho tied her up against her will just the night before.

It's obvious that the intent behind the scenes where Jericho interacts with Emma and Jill is to show him finally embracing the concept of attachment and emotions, but the scenes are just too schmaltzy (at one point, Jericho tells Jill that he never knew what love was...until tonight) in their own right to work as effective examples of pathos. When you combine those sequences with the brutal violence that ensues whenever Jericho gets even the slightest bit ticked off, it becomes bamboozling how anyone involved in the production thought these two crucial elements of Criminal would coalesce in a satisfying fashion.

As if all of that wasn't enough, there's also a generic plotline involving the aforementioned nuclear warheads that delivers a super generic villain and one or two action beats that are effectual if only for their oddness (Jericho beats an antagonist to death with a cactus at one point). Trudging through these intersecting and not at all gelling together storylines is Kevin Costner, who growls his way through all of the dialogue to an amusing degree. He seems to be going for an aloof demeanor in his performance, but he comes off more like he's channeling the title of a 1993 Richard Linklater film. Also, while I'm talking about Costner, his character might have one of the worst action movie "catchphrases" in a blue moon. His repeated axiom of choice is "You hurt me, I hurt you worse", which sounds like a line from Team America that Criminal constantly pulls out as a sincere attempt to channel the apex of bad-assery.

In addition to our leading man, Gary Oldman is the most prominent supporting cast member here, and boy is it always good to see Oldman on-screen. Here's a guy that's always committed in his performances, and even though he doesn't get to do much here besides relentlessly berate Jericho, he certainly lights up the movie whenever he pops up on-screen. It's also fun to see Tommy Lee Jones here, even if, like Oldman, he gets very little of note to do. As for Gal Godot, well, she doesn't get to do much besides be a damsel-in-distress in the climax, which is a real shame. But hey, at least Oldman and Jones give it their all in their severely underwritten roles, and that's all one can ask for in a cluttered mess like Criminal.
Posted by Douglas Laman (NerdInTheBasement) at 10:50 AM