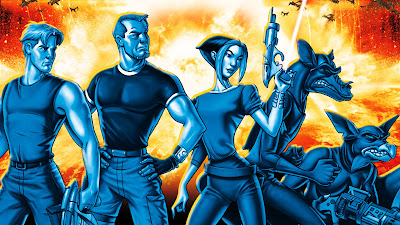 Where oh where has Don Bluth gone? A man who was once the protege of Spielberg at Universal (doing such box office this An American Tale and a personal childhood favorite of mine The Land Before Time under the supervision of Spielberg) has all but vanished in the 21st century, with his only film in this new millennium being a big enough box office bomb to torpedo not only his own career but also led to Fox Animation Studios being shut down.

It's a pity that such negative events succeeded the abysmal box office showing of Titan A.E., because it's actually a pretty good movie in its own right. While the film sometimes gets too wrapped up in its own little world (to the point where certain things in the plot, like our main hero escaping from an enemy prison, just sort of happen for reasons the writers seem to know about but don't let the audience in on), it's that sort of devotion to the kooky sci-fi world that they've created that gives the motion picture an endearing quality. To boot, the various sci-fi creatures and environmentz are a treat on a visual level, while there are also some great vocal performances from the likes of Nathan Lane and John Leguizamo. It's also worth noting, for the sake of context and history, that after a decade of American family animation being dominated by fantasy musicals (most of which were subpar Disney knock-offs like Quest For Camelot), Titan A.E. ushered in a brief epoch of PG-rated animation with a bit more edge to it. Some (like Titan A.E. and the similarly undervalued box office dud Treasure Planet) were diamonds in the rough, while others (such as Sinbad: Legend Of The Seven Seas and Atlantis: The Lost Empire) got the middling box office they deserved.

Of course, Shrek came along in May 2001 to radically change the face of American family animation, transitioning the default status of those films to computer-animated comedies, a format of storytelling that's still going strong 15 years later. Both as an examination of a peculiar time of transition in American family animation, as well as a strong film with a clear confidence in its own crazy story and mythology, Titan A.E. most certainly fits the bill.

Titan A.E. starts on Starz Kids And Family at 6:23 PM Eastern time.
Posted by Douglas Laman (NerdInTheBasement) at 8:25 AM