"You Couldn't Get Away With This Plot Twist In An Airplane Paperback": A Look At The People v. O.J. Simpson: American Crime Story 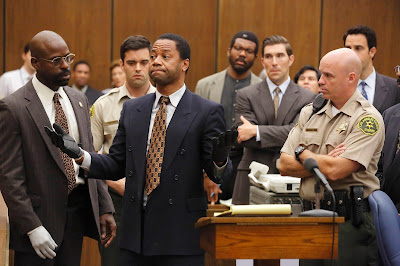 By now, the level of hyperbolic praise slathered onto The People v. O.J. Simpson: American Crime Story from both critics and audiences has reached the level of inescapable. Allow me to toss in my voice to such a chorus of rapturous commentary, because good Lord was this some excellently crafted television. Ten straight episodes that managed to be a riveting crime thriller in their own context and a fascinating rumination on race and gender related hardships. Sure, we all knew when we first strapped in for the first episode of this show exactly how it would end, but did any of us know The People v. O.J. Simpson was going to be this exemplary in every sense of the word?

With ten episodes at their disposal to tell their story, the various writers on this mini-series expand the scope of this trial beyond just O.J. (here played by Cuba Gooding Jr.), especially when it came to depicting the racial turmoil that Simpson's defense team utilized to get him off Scott free in the trial. Starting the very first episode off with footage of Rodney King being brutally beaten by LAPD officers in 1991 immediately depicts the sort of violence African-Americans experienced by individuals supposed to be "serving & protecting" them. This is the kind of hardship that was pervasive then and, as evidenced by numerous shootings of unarmed African-American individuals in the past few years, still endures today.

Right from the get-go, it's pretty apparent that The People v. O.J. Simpson is not a piece of art tackling the subject of racial matters that will coddle its audience with perceptions of how "people were bad back then, but now it's all good". This lack of sugarcoating on the topic of race leads to some of the best scenes of the entire show, like a flashback where Johnny Cochran (Courtney B. Vance) is pulled over by the cops for no reason in front of his own children. Or when, after an attempt from Cochran fails, white lawyer F. Lee Bailey (Nathan Lane) is the one who must make a theological laced speech to North Carolina officials in order to get incriminating audio tapes about Dan Fuhrman. By not ignoring the harsh realities of structural racism, it not only enhances the shows thematic underpinnings as a whole, it also makes the characters and their viewpoints all the more richer.

Speaking of characters, hoo boy does this show ever have a dynamite line-up of fantastically written characters paired up with towering performances. Johnny Cochran, a fellow seen by many in the public as a voice for the downtrodden, is a person who could have come across as too stylized, too heightened in the context of this TV show. The idea of him being possibly too stylized of a creation stems from the characters penchant for delivering grand orations on a wide variety of topics (though namely dealing with racial injustice). Such speeches had to be delicately delivered in a way that would allow for Cochran to still feel like an organic part of this world while also making him seem like the kind of person whose very words could ignite passion and followers. Courtney B. Vance excelled when it came time for him to get up and deliver these critical moments of discourse, while also creating a very real human being (one with a skeleton or two in his closet) behind the civil rights figure everyone see's on television.

Cochran is actually a crucial reason why Robert Shapiro (John Travolta) managed to work in this show after a bumpy start. In his initial appearances, Travolta's performance felt more like a demonstration of showy ticks and other physical mannerisms, especially compared to the more measured performances occurring around him. But once he begins to butt heads with Cochran (who begins to upstage him in this case), well, that's when his performance truly took off. Shapiro constantly acting like he's the king of the castle in this case when he's really a level below the pauper was a delight to watch. Bonus points for the dynamic between Travolta and Vance in the scene where Shapiro waltzes into the courtroom with a pro-police pin, rendering Cochran, well, bewildered, to put it gently.

On the "people" side of this court case, you've got two very complex individuals grappling with their own personal quandaries in this situation. Christopher Darden (Sterling K. Brown), an African-American whose initial elation at being assigned such a high-profile case gradually turns into intense vexation as Cochran slams Darden in the media and the entire trial spirals out of control. Alongside him at all time in the courtroom is Marcia Clark (Sarah Paulson), perhaps the best character of the entire program and that's really saying something tremendous. Being a White woman, Clark does not have first-hand experience with the sort of racial injustices minorities face in this country. However, she does have a clear understanding of another kind of prejudice, the sort of discrimination put upon women in society.

It's rare to find an episode in this season where Clark doesn't experience some sort of mistreatment at the hands of others solely because of her gender. Purchasing tampons leads to her getting heckled at by a clerk, attention is paid solely to her appearance in the courtroom rather than her skills as a lawyer. But what makes Clark so compelling as a figure is her inability to let all of this crush her determination to win this case. As she details in her final monologue (which Paulson outstandingly delivers), in which she details how a waiter who raped her in Italy years ago suffered no consequences for her actions, she hopes that her work in the law can make a difference for the victims of various horrible crimes all across the world. Even as the odds pile against her as the season goes onward, she won't let any sexist BS diminish her resolve. Clark is a fascinating character and Sarah Paulson becomes the MVP of the show in her tremendous performance. Just watching her handle dialogue-free emotional trajectory of Clark in that that scene of her walking into the courtroom with her new hairdo alone is enough to prove how crucial she is to this program's overall quality.

The real life court case of the Ron Goldman/Nicole Brown murders is one of those scenarios that seems to be the very definition of the axiom "truth is stranger than fiction", and with such events at the disposal of the shows writer, the ten episodes of this season structured in a most satisfying manner. Here's another great example of how the show expertly tackled what could have become a fatal flaw of the entire enterprise. In less skilled hands, the real life "plot twists" that frequently occurred in the case could have been executed in a manner that was less dramatically sufficient and more aptly described as "melodramatic". Instead, the various writers on this show carefully integrate every new plot development (such as the presence of those incriminating Dan Fuhrman audio tapes) in a manner that allows them their incorporation into the plot to not feel sudden or contrived but still resonate as a shocking turn in the story.

Another positive aspect worth noting about the overall plot structure of this season is that, amongst the crop of ten episodes found here, there wasn't a dud in the bunch. You won't find any 44-minute long installment of this saga that felt like the show just spinning its wheels. Every episode and most of the characters had a grander purpose to fulfill, which is a truly strong accomplishment given the massive cast this season dealt with. By the same token, the directing in this show (which was handled by three different individuals, Ryan Murphy, John Singleton and Anthony Hemingway) was also sublime, with the various idiosyncratic traits of the programs visual palette, such as those swooping camera shots, never distracting from the story.

To close out this examination of this season of American Crime Story, let's take a gander at the human being whom the majority of the plotlines in this show circled around. Yes, I'm talking about Orenthal James Simpson, played by Cuba Gooding Jr. The writers make a very smart decision to not depict O.J. as either an innocent man or as a guilty one. His few scenes where he's entirely alone are masterfully created in a way that they could easily be interpreted in either direction. That being said, Simpson is not depicted as a completely faultless man either, instead being shown as a man attempting to retain his image as a stalwart sports legend by constantly acting like a cooperative individual, always trying to emphasize in conversations how he much of an everyman. There's an intentional note of falseness to these moments, with Simpson clearly trying to evade coming across in public as the sort of man who didn't have multiple instances of brutal violence towards his wife prior to the murders occurring.

That naivete crops up once again when Simpson is released from prison and his first request is to organize a big o'l party. He thinks life will just return to normalcy, and of course, that's not what happens. An ominous air hangs over the entire party and Simpson's long-time friend, Robert Kardashian (played with excellent inner conflict by David Schwimmer), after months of wondering if his pal could really commit such violent deeds, finally throws in the towel and stops associating himself with Simpson. Right after releasing Kardashian leaves Simpson, we get to the shows haunting final shot, where Simpson stands in front of the statue of himself that he keeps on his property. Once an effigy that represented an athlete at his peak prowess, it's now a clear symbol to the man that no amount of putting on a good face and acting like everything's ok will change this situation. Nothing will ever be the same again for him, and that same sort of sentiment (though in a far more positive context) can be said for the landscape of scripted television now that The People v. O.J. Simpson has so clearly raised the bar in every aspect imaginable.
Posted by Douglas Laman (NerdInTheBasement) at 10:33 AM