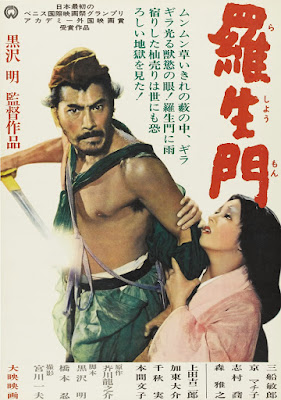 Similar to his endlessly remade 1954 work Seven Samurai, Akira Kurosawa's 1950 feature film Rashomon became so well-known and influential that its unique story structure (various individuals give their own retelling of a murder) was aped by countless movies and TV shows for decades to come. The first time I can recollect that I saw that specific narrative utilized was in an episode of Garfield & Friends and, of course, it wouldn't be the last time that style of storytelling would pop up again in the media I consumed. Watching Rashomon for the first time, it's easy to see why such an entertaining movie would spawn so many imitators, even if, for reasons I'll detail shortly, it doesn't quite stack up to the other Kurosawa pictures I've seen.

Two men, Kikori (Takashi Shimura, a frequent Kurosawa collaborator) and Tabi (Minoru Chiaki) sit in the shambles of a building during a heavy rainstorm, both being dumbfounded after hearing three different tales about how the of a man referred to as The Samurai (Masayuki Mori) was murdered. They regale a figure referred to in the credits as The Listener (Kichijiro Uedo) each different perspective, one of which comes from a bandit, Tajomaru (Toshiro Mifune), another from the wife of The Samurai (Machiko Kyo) and the final story coming from The Samurai himself, speaking through a medium.

What we have here is a straightforward narrative intended to have the varying perspectives play out, all leading up to a finale where the dissonance between the trio of stories and the reality of what actually happened lead the two narrators and the listener to contemplate the inherent nature of man, specifically if human beings are naturally inclined to be selfish creations. This more unembellished plot means it lacks some of the more nuanced character stuff that made later Kurosawa's efforts like Seven Samurai so brilliant for me personally, but luckily the filmmaker's inclinations for strong storytelling and directing are still intact here to keep this 1950 feature more than satisfying enough in its own right.

Actually, the man's knack for storytelling is a key part of why Rashomon works as well as it dos, with the screenplay he and Shinobu Hasimoto have created utilizes the varying perspectives of the murder to entertaining results. Most worthy of praise is how a duel between Tajomaru and The Samurai is depicted in a grandiose style benefiting the varying narrators, but when the confrontation is depicted in its true form, it's a far more unflashy and patchy affair. Also worthy of admiration is a number of the visuals in the feature, namely the opening shots of Kikori and Tabi sitting in shocked silence in the rain, which instill a somber feeling in the viewer immediately.

Kikori and Tabi are also at the center of the best scene of the entire movie, which is where the aforementioned ruminations on the nature of man creep into the picture. Hearing these various accounts has impacted all of the three men very differently, with The Listener having his selfish outlook on life reinforced, putting him into direct conflict with Kikori while the more optimistic Tabi has had his entire soul shaken by the tales he's heard today. The three actors bounce off each other well and their dialogue does a good job balancing between peeling back layers on the themes of Rashomon without wading into the waters of "obviousness". After diving into the bleaker nature of man, this final scene concludes on a hopeful note that seems to reflect Kurosawa's own hopeful, if realistic, take on humanity that aligns nicely with his view of people (best summarized as a mixture of idealism and pragmaticism) found in other features like Seven Samurai.
Posted by Douglas Laman (NerdInTheBasement) at 2:07 PM