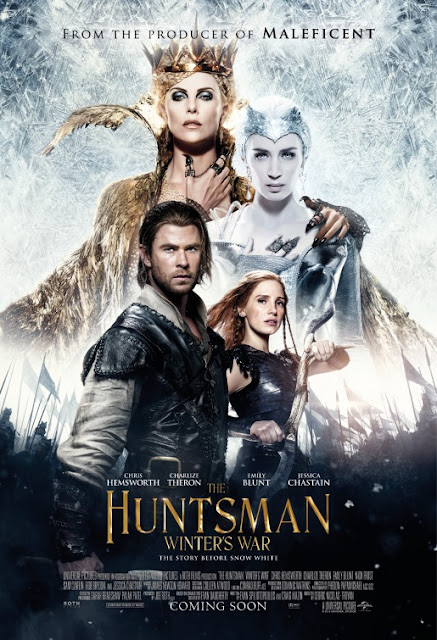 Despite what the television advertisements and trailers have told you (to the point that the majority of the marketing materials have a voice-over declaring that this is "The story before Snow White"), The Huntsman: Winter's War is not entirely a prequel to the profitable but mostly forgotten 2012 feature Snow White & The Huntsman. Now, it's first act is indeed set prior to that original movie, but that's mostly an extended prologue to the film proper. The part of the story that is indeed "the story before Snow White" mostly concerns itself with establishing that The Evil Queen Ravenna (Charlize Theron) from the first movie had a sister, Freya (Emily Blunt), who was a normal individual until her infant child was murdered by the offspring's father.

Realizing that her first born child has been killed leads Freya to become overcome with rage and unleashes her hidden ice powers. She then proceeds to give the outside world the cold shoulder by going off into isolation, establishing her own kingdom and kidnapping swaths of children to raise as her own army. Among those children are Eric (played as an adult by Chris Hemsworth) and Sara (played as an adult by Jessica Chastain), who grow up to be the finest warriors under Freya's watch. But soon Eric and Sara fall in love, an act that is forbidden by Queen Freya, who believes love is nothing but a lie. The two are eventually separated and finally (after all that plus some Liam Neeson intoned narration to fill in any narrative cracks), the plot proper gets started, which simply concerns Eric, Sara and some dwarves (played by, among others, Nick Frost and Sheridan Smith), after the events of Snow White & The Huntsman, attempting to take back the evil magic mirror (that Ravenna used in the first movie) from falling into the hands of Freya.

As you can likely gather, all of that backstory getting presented in such a short span of time proves to b more overwhelming than enlightening. Connections between characters (namely the romance between Eric and Sara) suffer the most from this type of story structure, with the only figure in the plot managing to be of any major interest is Freya. Armed with a more tragic backstory, Emily Blunt does a fine job making Freya more than just a copycat of her sister by weaving in an inner emotional turmoil into her wicked ways.

It's almost a foregone conclusion that she would have made a more engaging lead character in this story, since the titular Huntsman is sorely lacking in anything remotely resembling a noteworthy personality. Chris Hemsworth gives the role his all, and some of his charm certainly seeps through the lackluster writing, but he just can't overcome how Eric is thoroughly less interesting than practically everyone else around him. Without getting into spoiler territory, his relationship with Sara also provides the movie with problems, since their relationship becomes fractured midway through the story for reasons that feel so forced you'd think a Jedi is penning this screenplay. Their back-and-forth romance becomes meandering and soon drags the entire film down into the pits of rambling contrivances.

Luckily, there are other parts of The Huntsman: Winter's War that manage to excel, namely the costumes and sets which are as lovely looking as the script is messy. Costume designer Colleen Atwood (practically the master at this point of fairy tale movie costumes) is deserving of special praise for coming up with a number of unique and swell outfits for the various figures in the film. Atwood is a returning crew member from the first movie, which stands in stark contrast to director Cedric Nicolas-Troyan who makes his feature film directorial debut here. Troyan lacks a real voice or even vision in his directorial work here, which, considering how generic much of the script is, would have really come in handy in improving the overall motion picture.

Considering The Huntsman: Winter's War is basically being made solely because the studio behind Snow White & The Huntsman (Universal Pictures) had actors Chris Hemsworth and Charlize Theron contracted to do potential sequels, it's not quite as bad as it could have been. It certainly looks nice and Freya makes for a far more thoughtful antagonist than I would have expected (her final moment is particularly powerful and insightful on an emotional level). Unfortunately, the overall story is a complete mess and more often than not a slog to endure. At least the extremely limited amount of screentime Charlize Theron has here makes this the easiest ten million bucks she ever made, hands down.
Posted by Douglas Laman (NerdInTheBasement) at 10:30 AM