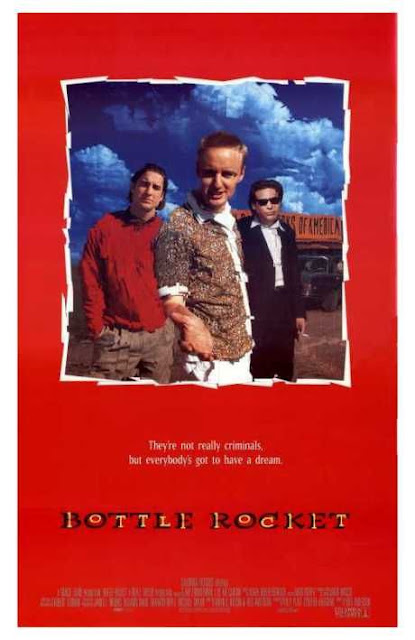 Recent years have been kind to American auteur filmmaker/genius Wes Anderson. Merging his unique visual aesthetic with introspective themes and emotional content has made his last three films among the best of the still young century. My adoration of the man's work meant I carried a large amount of interest in watching his very first feature film, Bottle Rocket. This 1996 feature film debut for Anderson was an expansion on an earlier short film subject of the same name that also starred the two leading men of this film, Luke Wilson and Owen Wilson, two actors (most notably Owen, who, along with Jason Schwartzman and Bill Murray, ended up becoming the Leonardo DiCaprio to Wes Anderson's Martin Scorsese) who would become staples of Andersons future work.

Compared to the future films directed by Anderson, the visual look of Bottle Rocket is far more restrained than the luscious picture-book like aesthetic of, say, The Grand Budapest Hotel. Instead, Bottle Rocket occupies the sort of run-down gas stations and small-town shops, hotels and the like that (as a life-long Texan) I'm all too familiar with. As for the plot, Bottle Rocket basically works as Wes Anderon's take on a heist movie (a genre he would revisit with Fantastic Mr. Fox). The two figures at the center of this caper are Anthony (Luke Wilson), a fellow who has just left a mental institution, and his quirky pal Dignan (Owen Wilson). Since this is Wes Anderson directing, the two's various heists throughout the film are handled with comedic results as the two are clearly not the conventionally intimidating or suave figures seen in typical heist films.

The dynamic between Anthony and Dignan gets a definitive boost from the fact that the actors playing the characters have spent a lifetime together, this giving them first-hand experience of sticking by each other in good times and bad. Luke makes for a fine leading man while Owen is the highlight of the cast by skillfully depicting the way his character covers up his inner pain with an adherence to manners and strict planning. Even at this start of his career as a writer, Wes Anderson shows an acute skill as a writer to take quirky characters that could have become simply a pile of eccentricities and turning them into something more.

Unfortunately, the rest of the cast of characters feel far more underdeveloped and don't bring much to the table overall. Inez (Lumi Cavazos), a woman working at a hotel that Anthony and Dignan stay at, gets very little in the way of distinguishing character traits and serves solely as a love interest for Anthony to become enamored with. Meanwhile, prolific crime figure Mr. Henry (James Caan) gets on or two memorable moments (namely when he intimidates two guys at a country club who've been giving Dignan a hard time), but he still comes across as one-note archetype. These more shallow figures that factor into the plot in a pivotal manner don't gel with the more somber (though far far more devoid of humor of course) aesthetic of Bottle Rocket. Just when one may be getting invested in the plight of our lead duo, characters like Inez and Mr. Henry saunter on into the feature and fit into the movie about as well as Jabba The Hutt at a Weight Watches meeting.

It is worth noting, for fellow Wes Anderson aficionados, that certain visual trademarks of his do crop up in Bottle Rocket. Namely, the practice of quick cuts between close-up shots of inanimate objects is evident here, while his knack for figuring out how to get the most out of a joke from a visual sense is also on display here. While Bottle Rocket may lack the more refined depth and well-rounded cast that his later films would carry, it's still easy to be entertained by Bottle Rocket, especially if you're looking for initial glimpses into what this filmmaker was truly capable of.