Norm Of The North Review 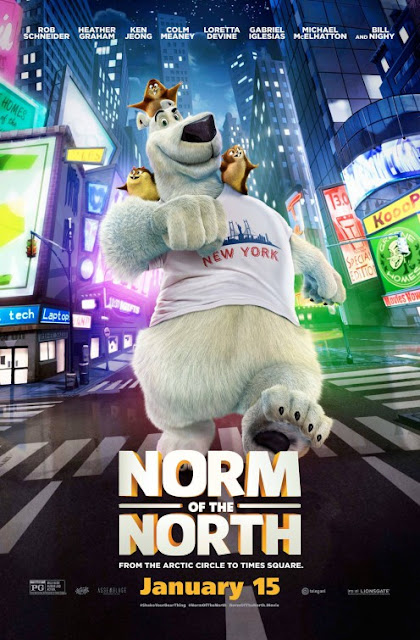 Once or twice a year, we are blessed with movies from small-scale animation companies who seem convinced that it's easy as pie to replicate the artistic success experienced by the likes of PIXAR. All ya need is computer graphics, lots of shouting and talking animals to churn out the next Inside Out, right? Right? Of course not, but it never seems to cross these producers minds that such an equation would be faulty. Then again, maybe there's a far darker explanation going on for why Norm Of The North exists because I honestly cannot see how any human being with a functioning brain would think this final product was fit to be released.

The titular character Norm is a polar bear (voiced by Academy Award viewer Rob Schneider) who finds himself a social outcast thanks to his inability to hunt and kill animals. He also has a unique talent of being able to speak to human beings, a trait we see, via a flashback, that he learned as a child (though it's perplexing why Schneider didn't adjust his voice at all for the far younger version of Norm). When his Arctic home is looking to be demolished to make way for Condo's, he heads off to New York City, the home of the man behind these Condo's (a villain by the name of Mr. Greene), to find a way to stop these homes from being built.

It turns out the way to stop them is to become a mascot of sorts for Mr. Greene and from there the plot just sort of shuffles along until an unexciting climax occurs and ends everything. Seriously, this is one sloppily structured movie which moves at the frenetic pace of a snail low on blood sugar. The overall vibe of the movie just oozes awkwardness thanks to joke after joke just failing to register in any sense, with Norm Of The North's preference for bathroom humor (Norm has a trio of Lemming's following him around who are rarely seen not either farting or urinating) that only accentuates the uncomfortable nature of the entire production.

Animation-wise, the graphics look horrible out-of-date, even by the standards of small-budget computer animation. Even The Nut Job (and boy howdy did I never think I'd be praising that wretched movie) had decent looking fur on its animal characters for Gods sake! There's an odd dissonance between the characters and the environments they're supposed to be inhabiting, which, as one can imagine, becomes extremely distracting .Even worse are the designs of the human characters, with one figure in the plot, young girl Olympia, having such an overlarge head compared to the rest of her body that she appears to resemble a possessed Funko bobblehead.

Renowned anti-vaxxer Rob Schneider continues to endanger children by starring in this putrid family movie, though mild (and I do mean mild) entertainment can be found in how his limp vocals frequently do not match the characters facial expressions or body language at all. Ken Jeong plays the antagonist Mr .Greene, with apparently the only direction given to him while recording his vocals for the project being to yell every single line of dialogue he has. Depressingly, legitimately great actor Bill Nighy also shows up here as a wise bird named Socrates. Nighy has shown that he's adept at exemplary voice work in  Arthur Christmas and the Pirates Of The Carribean films, but none of that talent gets utilized here. I will say Norm Of The North is likely the only movie in Nighy's extensive filmography that has him uttering the word "twerking" so.....there's that.

To say the trailers and advertisements for Norm Of The North did not inspire confidence may be one of the greatest understatements in recent memory. It's excruciating trailers made the movie look like a hodgepodge of computer-animated family movie cliches and, well, those trailers do get a bonus point or two for not engaging in false advertising. How uninspired is Norm Of The North? This movie can't even wait for the climax to engage in the frequent computer-animated family movie trope of having all of the characters dance to a pop song. Nope, the cast boogies down to the tune of Shut Up And Dance just fifty-six minutes into the running time. After all, why put aside time to develop characters or create actually successful jokes when one can just pad out the running time characters dancing to recognizable pop tunes?
Posted by Douglas Laman (NerdInTheBasement) at 10:23 AM