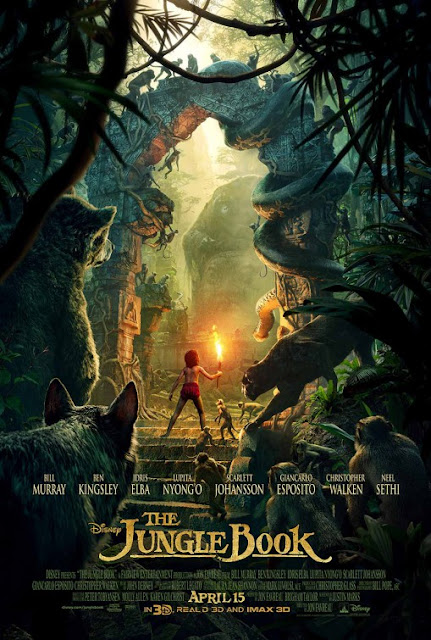 I'm a hardcore Disney fan (my first word as a human being, believe it or not, was Disney), but, to be perfectly frank, this new wave of live-action adaptations of classic Disney cartoons hasn't really done much for me. Alice In Wonderland was typical modern day Tim Burton pablum, Maleficent's few interesting ideas (namely weaving in a metaphor for rape into the backstory of its titular character) were severely overshadowed by how tedious and uninspired the rest of the film's story and characters were and Cinderella was only inoffensive at best. But finally, oh finally, one of these live-action adaptations has finally turned out to be a well-made movie in its own right.

As you've likely guessed, that feature in question is The Jungle Book, which I wouldn't hesitate to say stands proudly alongside with the likes of John Carpenter's The Thing and The Coen Brothers True Grit as a template for how to do a remake right. If you're like me, The Jungle Book will tingle your nostalgia bones mightily (the original 1967 animated Disney motion picture was a childhood favorite of mine), but merely repeating elements of past beloved movies is not at all a foolproof recipe for creating a singularly successful movie. Thankfully, this new take on Mowgli and his jungle buddies realizes that it has to bring plenty of new material to the table in order to justify its existence.

Mowgli (Neel Sethi) is a young boy whose spent the majority of his life growing up in the jungle, raised by a pack of wolves and the Panther Bagheera (Ben Kingsley). However, the ferocious tiger, Shere Khan (Idris Elba), who carries a burning hatred for humans, has his sights set on killing Mowgli and ridding the jungle of any trace of man. Now, Mowgli must return to the man-village if he is to be safe, though Shere Khan will not let him go on such a journey without a fight. Basically, it's a new-ish plot structure utilizing the character personalities of the original Disney film and a number of elements from the 1894 Rudyard Kipling novel (monkeys are here referred to as the Bander-Log, for instance).

Like I said before though, there's plenty of new tricks up this movies sleeve and one of the best is how screenwriter Justin Marks decides to emphasize that Mowgli is an outcast in this environment prior to Shere Khan showing up to wreck shop. Other animals who gaze upon Mowgli stare and whisper about him being bipedal and how strange he looks compared to the other creatures in the jungle. And then there's the scripts best new character related creation, the incorporation of various inventions Mowgli makes throughout the movie that the other individuals in the plot refer to as "Man-Tricks". Throughout the plot, Mowgli creates various items, such as a cup to gather water with, that make him further stand apart from his jungle brethren. Such concoctions earn the disapproval of both the wolves who raised him and Bagheera.

It's a storytelling beat that's smartly handled on a number of levels, namely in the fact that his creations never get too wild or unbelievable. He never creates, like, a rocket ship or whatever, it's all stuff you could see a kid having the capacity to create. But allowing him to have this trait gives Mowgli more depth and provides a solid foundation for his friendship with a humorous bear named Baloo (Bill Murray), whose the first animal to encourage Mowgli to embrace his knack for creating all sorts of "Man-Tricks". Speaking on this crucial emotional crux of the movie, it helps that, in addition to Justin Marks super well-written screenplay, Jon Favreau is the director in charge of this production. The two best movies Favreau has ever made have dealt with the concept of protagonists adjusting to a world ill-suited to them, whether it's Buddy The Elf's optimism clashing with the rough-and-tumble nature of New York City or Tony Stark learning to grapple with the consequences his actions have had on others.

Compared to his past filmography, The Jungle Book is one of the more serious films Favreau has directed, though, don't worry, this is not a film that dips its toes into the murky waters of gratuitous darkness. Actually, plenty of humor can be found in Baloo, voiced impeccably by Bill Murray, an actor who makes the laidback nature of this bear feel most endearing. That being said, the lackadaisical tendencies of the character that Murray executes so well don't come at the cost of pathos, as Murray is also able to excellently sell any moment where Baloo feels worried for his man-cub friend. On the topic of voice acting, the casting on this production is excellent from top-to-bottom. I wish Bagheera had more to do in terms of his thematic connections to the overall plot, but Ben Kinglsey still gives him an appropriate worldly quality to his vocals. And our villain, Shere Khan, is given a menacing voice via Idris Elba, who conveys peril in every line of dialogue. Speaking on Shere Khan though, I do wish some of his fight scenes in the climax of The Jungle Book were edited better, since some of it looks more jumbled and hard to make out, likely an artistic decision done in order to obscure anything too intense that might jeopardize the movie getting a crucial PG MPAA rating. Oh, and it's worth noting one other voice actor here...the masterful Christopher Walken (who gets a fun Easter Egg referencing one of his most beloved SNL moments), who leaves quite the impression when he monkeys around on-screen.

Thanks to how much money the likes of Cinderella, Alice In Wonderland, Maleficent and The Jungle Book have cooked up, we've got a ton more of these live-action remakes of classic Disney films on the way in the next few years. Conceptually, some (like the star-studded Beauty & The Beast and the Emily Blunt/Lin Manuel-Miranda headlined Marry Poppins follow-up) sound promising, while others (do we really need a movie centered on the Genie from Aladdin now that Robin Williams has departed this Earth?) sound less so. Hopefully, future endeavors in this subgenre take more than a few cues from The Jungle Book, which rises far above beyond being a mere cash-grab. Instead, you've got a talented writer and director uncovering new emotional facets of beloved characters with the aid of some groundbreaking visual effects. Yeah, as you've likely heard, The Jungle Book has some astounding special effects, with all of the tree branches, drops of water and every inch of fur on these animals looking remarkably real, to the point where I forgot I was watching computer generated characters. Thankfully, The Jungle Book remembers that snazzy visuals are nothing without a good story and characters, and this movie has got both of those elements in spades.
Posted by Douglas Laman (NerdInTheBasement) at 10:58 AM