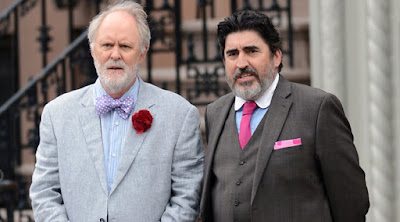 I've written extensively in the past about how badly Sony Pictures Classics has botched the releases of numerous noteworthy dramas in recent years and few films suffered as badly at the hands of the studios incompetence as the fantastic 2014 drama Love Is Strange. Starring John Lithgow and Alfred Molina as a couple going through financial struggles, it's a smartly written film with two incredible lead performances that should have been treated better, nay, far better, in its theatrical release.

Luckily, you have the chance to watch it tonight on Starz Cinema and I strongly urge you to do so. Perhaps the most extraordinary part of Love Is Strange is how it refuses to toss in contrived dramatic scenarios just for the sake of creating "high-stakes". No one gets an all of a sudden illness, no one is caught in an affair, Love Is Strange realizes that far more compelling drama can be found in the everyday interactions with the people around us. It's a smartly written movie and Lithgow and Molina are absolutely incredible in the lead roles. Love Is Strange may not have gotten poorly treated in its theatrical release, but I strongly urge you to check it out now.

Posted by Douglas Laman (NerdInTheBasement) at 7:13 AM