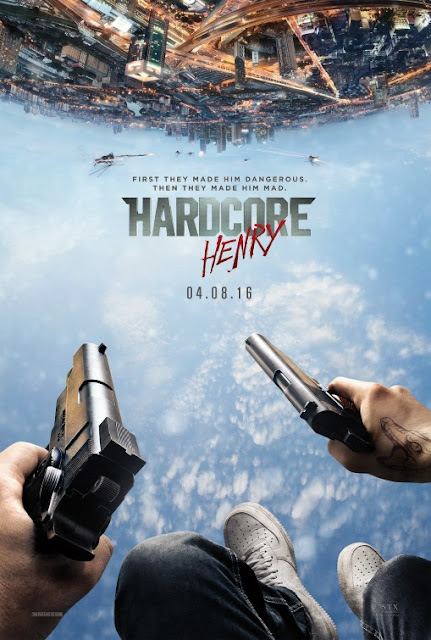 If you've even had only the briefest exposure to the advertising campaign of Hardcore Henry, you likely are all too aware that the films big claim-to-fame is that it was shot in a first-person style of filming, putting the viewer at the center of the story of Henry, a man whose awoken with no memory but has been given various technological enhancements in his body that make him an unstoppable killing machine. Those upgrades are a positive, but less uplifting is that a very bad man by the name of Akan (Danila Kozlovsky) has kidnapped Henry's wife, Estelle (Haley Bennett).

Now, Henry must go through tons of gangsters and action-packed sequences to take his wife back. It's a premise whose more conventional nature (this is the "Save The Princess" style of storytelling at its most basic) is obviously being utilized so that it can just chug along and take a backseat to the large number of action sequences present in Hardcore Henry. Given their prominent nature in the plot, it's a pity such combat scenes turn very repetitive very quickly. There's only so many times I can watch an unkillable dude wipe out arsenals of minions with a gun before I begin to wonder why the films inventiveness seems to have began and ended with the idea of shooting the entire film in a first-person manner of filming.

At least that aforementioned style of shooting doesn't detract from actually seeing the movie all that much (If this film is any indication, 'll take POV-filming over shaky-cam any day of the weeks) and a more entertaining rooftop-set climax gives Henry a wider array of weapons to utilize. Unfortunately, the lack of innovation in the majority of the action really begins to grate very quickly, especially since there's so little personality in Henry (for obvious reasons) or in the foes he faces. This is especially a problem towards the conclusion of the picture, which bypassed at least three different spots where it could have satisfyingly concluded seemingly for the sake of tossing in as many action sequences into the film as possible.

Really, the only part of Hardcore Henry that truly cackles is Sharlto Copley as Jimmy, a character whose bravado absurdity stands out in a film this sorely generic. I won't delve into spoilery specifics on his character, but he plays an unkillable fellow who keeps reappearing with new stylized personalities. It's surprisingly fun to see Copley give each new side of Jimmy his trademark style of frenzied commitment (which can also be seen in his turns in The A-Team and Elysium). He's a character on your toes, you really don't know where he's gonna go and I dearly wish Hardcore Henry had more elements like that.

Aside from a few quirky details (for instance, Akan has telekinetic powers for unexplained reasons, while Tim Roth pops up for five lines, tops, as Henry's dad in flashbacks), Hardcore Henry is overall a pretty rote production despite its more unique style of filming. It's certainly not a "bad" film, mainly thanks to the fact that it's a very polished production, particularly in the sound department which makes the sound of every bone crunch or explosion pop. But a little (or, to be blunt, a lot) more imagination could have helped Hardcore Henry become something more than an audacious but subpar expirement.
Posted by Douglas Laman (NerdInTheBasement) at 12:53 PM