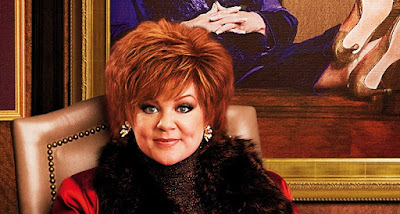 Twas not Doomsday nor Lex Luthor nor Darkseid that took down Batman v. Superman at the box office. No, Melissa McCarthy was the one to end the box office reign of those two superheroes, with her newest movie taking the number one spot at the box office with $24.5 million. That's a 15% increase from the opening weekend of Tammy, though that one burned off demand by opening on a Wednesday. It is noticeably lower than the bows of Spy, Identity Thief and The Heat, though the smaller $29 million budget of The Boss means Universal probably aren't sweating bullets over this box office performance.

How come The Boss didn't soar to the heights of some of Melissa McCarthy's biggest hits? Simple really; the one-note concept of her being a foul-mouthed millionaire trying to rebuild her life just didn't hold the same entertainment appeal in the marketing as "Melissa McCarthy as a spy" or "Melissa McCarthy and Sandra Bullock as police officers". There also wasn't much of a story nor notable character dynamics (like the chemistry between Bullock and McCarthy in the ads for The Heat or the rapport between Jason Bateman and McCarthy in the promos for Identity Thief) presented in commercials, with various marketing tools instead showcasing McCarthy engaging in generical physical comedy that could have appeared in any movie. This one will likely get to $60 million before its domestic run is done, though the more middling word-of-mouth (The Boss received a C+ CinemaScore) could doom it in the weeks to come.

In second place was Batman v. Superman: Dawn Of Justice, suffering another steep dip this go around with a third-weekend gross of $23.3 million, losing 54% from last weekend. This is nowhere near as bad as the 69% plummet from last weekend, but it is another clear sign that this movie isn't having the best word-of-mouth, especially since, like last weekend, this wasn't a very competitive weekend. It'll be interesting to see how it drops next weekend when The Jungle Book comes around and steals its IMAX 3D screens. Currently, BvS has grossed $296.5 million domestically and will cross $300 million likely on Wednesday and will have a final domestic gross in the neighborhood of $330-335 million.

Zootopia continued to stick around with another strong hold this weekend, losing only 27% this go-around for a sixth-weekend haul of $14.3 million. That's the eighth best sixth weekend on record and brings the domestic haul of Zootopia to $296 million. Here's an interesting question to pose; could Zootopia end up making more at the domestic box office than Batman v. Superman among March 2016 releases? It'll depend on how each title holds against The Jungle Book next weekend though I wouldn't count out Judy Hopps winning that match...

Rounding out the top five was Hardcore Henry, which grossed only $5.2 million at 3,015 locations, making it the fifth worst opening weekend ever for a film opening in over 3,000 locations. It's also by far the worst opening weekend for mini-distributor STX Entertainment in their super short lifespan. While Hardcore Henry had an interesting hook on a conceptual level (it's all shot from YOUR point-of-view!), the marketing never gave interesting characters or plot points that are truly key to a movie succeeding with audiences. A film cannot survive on a gimmick alone, and Hardcore Henry didn't really offer much in its ads beyond "POV! POV! POV!".  It also didn't help that reviews for this more unorthodox looking film were decidedly mixed which probably turned of some viewers that were on the fence on seeing the project in theaters.

God's Not Dead 2 did not get a miraculous resurrection in its second weekend of release, losing 43% in its second frame for a second-weekend sum of $4.33 million. God's Not Dead 2 has now grossed only $14.1 million and is running 33% behind its predecessor through the same point. With a tiny bit of luck, God's Not Dead 2 should barely clear $20 million by the end of its domestic run, which would be 67% lower than the domestic gross of the first movie.

Demolition also debuted this weekend to very little fanfare, opening in 854 theaters for a middling $1.12 million bow. That results in a poor per-theater-average of $1,317. There's a few adult-skewing dramas in the marketplace right now (namely, Eye In The Sky, Hello and My Name Is Doris) and you need to have a killer concept and great reviews to stand out. Demolition, by contrast, received mixed marks from critics and had a super generic marketing campaign.

Eye In The Sky became the biggest movie ever for distributor Bleecker Street this weekend, taking in $2.8 million (a solid 28% decline from last weekend) and bringing its domestic gross to $10.4 million. Meanwhile, fellow March 2016 release Midnight Special expanded to 493 locations to mixed results, only gathering $1.15 million for a per theater average of $2,345.

Finally, Focus World released the newest Anna Kendrick film, Mr. Right, onto video-on-demand movie theaters simultaneously this weekend. Put out in only 35 locations, Mr. Right grossed an anemic $25,000 for a terrible $714 per theater average. Looks like they'll have to count on sales from Digital Retailers and conventional home video outlets for a profit on this one.

The top 12 this weekend grossed only $95.7 million, a 23% decrease from the same weekend last year and the second lowest weekend of 2016 so far.
Posted by Douglas Laman (NerdInTheBasement) at 1:06 PM