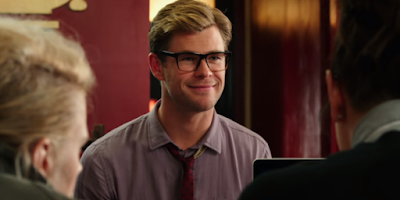 When many actors get the chance to transition to the status of leading man in major American motion pictures, things tend to go haywire for one notable reason; the movies they headline never give these actors the chance to utilize the idiosyncratic talents that got them popular enough to warrant leading man status in the first place. Notice how Aaron Paul went from his brilliantly nuanced turn in Breaking Bad to being blander than saltines in Need For Speed. Same for Chris Pratt in Jurassic World or Ryan Reynolds in any leading man project that isn't Deadpool.

One reason Chris Hemsworth has struggled with headlining projects outside of the Thor movies is that exact problem where the scripts and/or directing of other films he participates in never afford him the chance to be more than just "rugged male lead". Some new early footage from this summer's Ghostbusters movie seems to be showing off Hemsworth in a far more goofy role than he had in films like, say, The Huntsman: Winter's War and I must say I like this side of him already quite a bit. Hemsworth had a number of noteworthy comedic moments in his Thor appearances (I love the subtle bit of him hanging him hammer on a coat rack in Thor 2), and it appears those movies were no flukes considering how well he handles juxtaposing his chipper demeanor with a more absent-minded personality in the bits of footage we see here.

Hopefully more of this distinctive individuality seeps through in the final film, and hey! Maybe that'll even encourage some more Hollywood executives to let their leading guys show off more range than "grizzled genericness" in  their movies. Couldn't hurt!