There Are Four Avatar Sequels Coming, You Cannot Escape Them 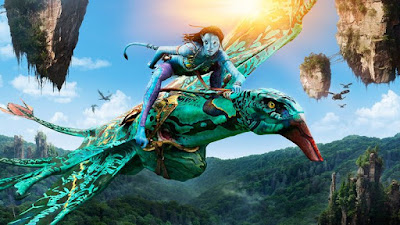 Y'know what movie I like? Avatar. It's nowhere near a perfect movie (then again, what is?), but James Cameron certainly knows how to weave a visually pleasing world. There's also an earnest spirit to the film (it's less obsessed with being "dark" or "gritty" than it is embracing all the fun that comes with having your own space dragon to fly around) and Stephen Lang's General Quaritch is the perfect kind of over-the-top bad guy that this kind of movie needs. Yeah, all in all, a super enjoyable movie, totally easy to see why audiences got so enamored with it, especially since it was one of the first films to take full advantage of the positive aspects of Digital 3D and especially IMAX 3D.

But, even as someone who enjoyed the first movie immensely, I've always found the prospect of a follow-up dubious. Avatar works as a singular legend, a tale with broad archetypes that feels like it could be told around a campfire to young Na'vi individuals to teach them the values of bravery and selflessness. Point being, the self-contained nature of Avatar is part of its charm, and I've never been convinced satisfactory follow-ups could be concocted. Well, looks like we may (emphasis on may) find out soon enough, since James Cameron went out to the 20th Century Fox panel at the movie theater owner convention CinemaCon to announce that he has not one, not two, not three but FOUR Avatar sequels in development.

We've known about his plans to not only do Avatar sequels, but three of em, for awhile now, but this is the first time we've heard there would be four new Avatar adventures. Cameron apparently made sure to note that each sequel would work on its own from a storytelling perspective, but that taken as a whole these would all work as one larger story. The first of these is scheduled to be released in December 2018 while the other three sequels will arrive every other year in December, presumably concluding with Avatar 5 in December 2024.

At this point, Cameron has made a career out of bold decisions that everyone thought was foolhardy. I have no clue if these will actually be any good, or if they'll even meet their projected release dates (remember when Avatar 2 was scheduled for December 2014? Remember when there were only gonna be two sequels?), but I do know one thing; never underestimate this man. Let's see if he can pull off this feat that, from a conceptual standpoint, makes Titanic look like a mere cakewalk.
Posted by Douglas Laman (NerdInTheBasement) at 1:51 PM