A Hologram For The King Review 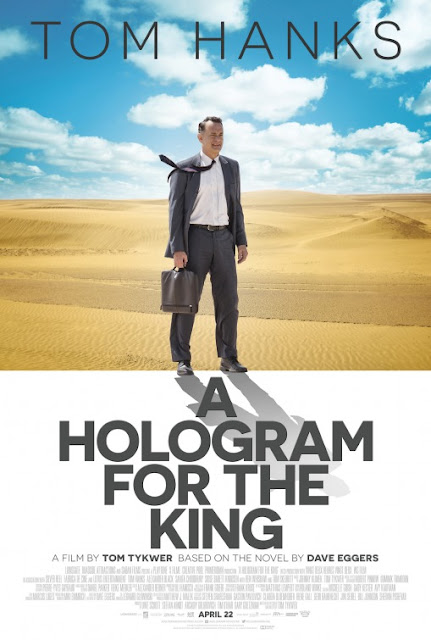 A Hologram For The King is the second collaboration between Tom Hanks and director Tom Tykwer, following up on their work on the 2012 masterpiece Cloud Atlas (Tykwer directed three of the segments in that feature). Seriously, that ambitious sprawling cinematic tour de force is one of the most criminally underrated films in recent years and the concept of the two reuniting is a tantalizing prospect. Unfortunately, all of the nuance and introspection that came with Cloud Atlas won't be found here. If Cloud Atlas was charged by a spirit of gusto, A Hologram For The King is instead fueled by nothing more than simply tedium.

We've all reached a place in our lives where we feel like we're at a crossroads. In fact, more likely than not, we've all been at such a spot multiple times in our existence. That's where Alan (Tom Hanks) is right now, his life seemingly lacking a concrete purpose. While on a trip to Saudi Arabia to present a promising hologram technology to the titular king, he gets into a myriad of adventures that are kept together by very little in the way of connective tissue. It's hard to feel like the assortment of escapades Alan finds himself in are building to a greater emotional truth and they most certainly don't work as stand-alone adventures in terms of being entertaining.

That's only one of the problems found in Tom Tykwer's screenplay, which also seems to almost relish avoiding any kind of conflict the story could possibly present. Alan's relationship with his daughter is apparently a bit rocky, but the most fractured moment in their dynamic that we the audience see is him telling a picture of his offspring to not smoke anymore. Another scene has Alan being snuck into a holy religious site where only Muslims are allowed. All seems to be going well, no one is noticing...when suddenly, police officers appear! Oh no! Will Alan and his pals make it out?? Turns out, they do thanks to the magical help of a jarring edit that goes straight from Alan and his friends driving in a packed street, about to be descended on by officers...and then, BAM! They're just driving out on an abandoned road, with no reference to the previous scene or its events cropping up again.

I don't need a movie to constantly throw car crashes and massive explosions at me to keep my attention but could a movie that wants to solely focus on the growth of its protagonist at least have some interesting character drama and organic reasons for the lead to blossom as a person? Instead, A Hologram For The King just tosses potentially dramatically compelling scenarios that could provide solid foundation for Alan to grow as a human being and bypasses them completely. Even the threat of cancer (which comes from a strange lump on Alan's back) just moseys in and out of the movie like no big deal.

Alan makes for a super lackluster lead, but it's more than worth noting that Tom Hanks does a fine job in the role. Frankly, playing the "Oh gee whiz" loveable everyman is the kind of part Hanks could play in his sleep at this point, but it's worth noting that he still puts noticeable effort and exertion into trying to compensate for the lack of depth his character gets in the script department. Surrounding Hanks as Alan in this tale are two key supporting characters, chummy driver Yousef (Alexander Black), a one-note stereotype that at least gets one or two funny lines of dialogue, and doctor Zahra (Sarita Choudhury). Oh, and fellow Cloud Atlas cast member Ben Whishaw pops up for a brief cameo that had me yearning for him to have a bigger role so he could liven up this uneventful production.

It's also worth noting that Tom Tykwer's direction does lead to a select few pieces of A Hologram For The King carrying a level of craftsmanship the rest of the movie lacks. Specifically, flashbacks in this film are depicted with no visual signifiers to differentiate them from the rest of the story that takes place in the present, a nicely executed subtle way of conveying to the audience in a visual sense just how much Alan's past has become intertwined with his present. Unfortunately, that element of A Hologram For The King is more of an exception than the rule, with the rest of the proceedings being mostly a scattered mess. Give this one a pass and give the underrated gem Cloud Atlas a watch instead.
Posted by Douglas Laman (NerdInTheBasement) at 1:36 PM