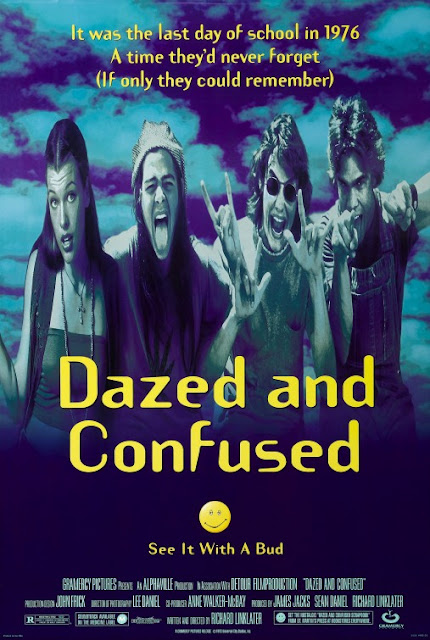 At this point, the rise of a new breed of indie filmmaker in the early 90's is practically a legend itself, with the rise of individuals like Robert Rodriguez, Kevin Smith and Quentin Tarantino ushering in a new age of cinema at the dawn of the final decade of the 20th century. Just as the likes of Steven Spielberg and Woody Allen shifted the paradigm of filmmaking in the 70's, these storytellers were changing everything as far as indie cinema, and even film in general, and among those directors altering the movie landscape at this time was a guy by the name of Richard Linklater. Emerging from Austin, Texas, his debut film, Slacker, had actually inspired fellow early 90's indie cinema auteur Kevin Smith to become a director.

That's the kind of power Linklater's cinema possesses, as anyone who's had even the briefest exposure to his work can attest. This is a guy that regularly eschews the big and splashy for the small and intimate, a perfect approach for his smaller in scale character pieces that thrive on engrossing dialogue and a similarly absorbing atmosphere. Dazed And Confused, his second feature film that was released 23 years ago back in September 1993, Linklater (who writes and directs this motion picture) sets the proceedings in his hometown of Austin, Texas of 1976, smack dab in the middle of a decade that was proving to be transformative for this country.

One year removed from exiting a nearly two-decade long war in Vietnam, the country had been shaken and our own tranquility and well-being still lived in the shade of the looming threat of nuclear warfare emanating from the Cold War, another conflict America had been embroiled in for multiple decades at this point. Many in this chapter of American history found solace the same way those in the Hippie Movement of the 60's did; by embracing drugs, promiscuous sexual activity and rebelling against the establishment whenever possible. That's the mindset that's captivated the lead characters of this motion picture, who engage in all sorts of rambunctious behavior on the first night of summer vacation.

Dazed And Confused has its plot set during the course of a solitary day, with much of the proceedings taking place at night as the various students partying and getting into every kind of mischief imaginable. Emphasis on various, as Linklater chooses to not just follow one singular protagonist throughout the story, but rather sets his sights on depicting a whole menagerie of teenage individuals. The closest thing the movie has to a lead is Pink (Jason London), a football player whose contempt for his coaches attempt to curb his drug and alcohol consuming habit bewilder his fellow football players. There's also soon-to-be-Freshman Mitch (Wiley Wiggins), whom Pink and various other Seniors-to-be soon take under their wings. And let's not forget the trio of Mike (Adam Goldberg), who begins to get all existential on this night of intended recreation, Tony (Anthony Rapp) and Cynthia (Marissa Ribisi).

Then there's Pink's energetic pal Don (Sasha Jenson), perpetual stoner Slater (Rory Cochran) and then-unknown actor Matthew McConaughey pops up as Wooderson, an older individual responsible for McConaughey's "Alright, alright, alright" catchphrase and some of the films most memorable quotes. There are plenty of other characters that pop up (including a Freshman girl named Sabrina played by Christin Hinojosa and an antagonistic Senior to be played by a very young Ben Affleck), which may make the film sound like it'll become the very cinematic definition of crowded. But that's one of the most remarkable aspects of Dazed And Confused, it never once feels overstuffed or convoluted. It helps that all of the characters are united by a single event (celebrating the start of Summer vacation in the most intrepid way possible) while the array of plotlines manage to sporadically mingle throughout the course of the story in an organic way.

Another advantage of having such a large cast in this particular story is that it expertly recreates that same feeling that is pervasive in the corridors of High School, the idea that everything on a social level that happens here is actually important in the grand scheme of things. It's not of course (and for someone like me that struggled socially in that environment, that's a very good thing indeed), but the various individuals in this plot and their personalities are so well-established that the realm that these Austin High Schoolers inhabit feels like a world in unto itself. For instance, these meticulously crafted character dynamics allow for one to can completely understand why Mitch would want so acutely to hang out with these older High School students on a night like this.

Accompanying any party sequence in a murderer's row of excellent classic 70's tunes, with the likes of Cherry Bomb, Slow Ride and Fox On The Run accentuating the unique time period the film is set in. Of course, Richard Linklater doesn't just turn to this decade when he needs various surface-level visual and auditory trappings (the aforementioned music, the wardrobe of the characters, the automobiles seen throughout, though all three of those specific elements of the film are loads of fun). Instead, the aforementioned desire for escapism that was pervasive throughout this era crops up as a recurring theme for the characters, a storytelling choice that works particularly well since it correlates perfectly to the aspirations held by teenagers in every single decade to shed their hometown roots and find a better world. Just as many in this epoch of this country were searching for a way to leave the grisly details of reality, so too are these teenagers searching for a way to declare their own independence, their own identity, their own lives via the magic of partying, drugs and getting into mayhem with the people they love.

I'm not sure if Linklater intended for the universally known teenage impulse for freedom to correlate so well with the feelings that had gripped the nation in the 70's (as well as the 60's for that matter, the era where the hippie movement and incessant use of drugs and looser sex became popularized), but it makes for a fascinating read of the film. And, even when taking my personal analysis of the features story aside, this is still an incredibly fun movie to watch. Richard Linklater has pulled off a most incredible feat here, taking a specific era he almost certainly has a sort of reverent nostalgia for (he was 16 in the year Dazed And Confused takes place) and doesn't just take it for granted that every viewer of this film will carry the same sort of remembrance for this bygone generation. Instead, he creates interesting characters and situations that get anyone watching this film, regardless of their age, to be riveted by its story. He doesn't just let his own fondness for this time period carry the movie, he wants Dazed And Confused to stand on its own two feet as a piece of storytelling. That's a goal the features manages to accomplish and then some.

Dazed And Confused is one of those movies that I really can't praise enough. It's the kind of film I wanna rewatch multiple times over the moment it's finished, solely so I can immerse myself in its captivating aesthetic. Even in only his second feature film, Richard Linklater shows an incredible gift for creating transfixing cinema centered around everyday situations. He's a filmmaker whose perceptive tendencies are exhibited in an exemplary style, a gifted writer who can wring momentary pathos (there's something heartbreaking about Pink, in a state of contemplation, standing out on the abandoned football field at night while one of his friends remarks about how he wants to all that he can while he's stuck in High School) while retaining a ubiquitous tone of irreverence. Examined as part of Linklater's larger career and/or as part of the 90's indie boom, Dazed And Confused is an important creation. Taken on its own merits, it stands equally tall as a gripping and irresistible slice of 70's set cinema.
Posted by Douglas Laman (NerdInTheBasement) at 11:00 AM