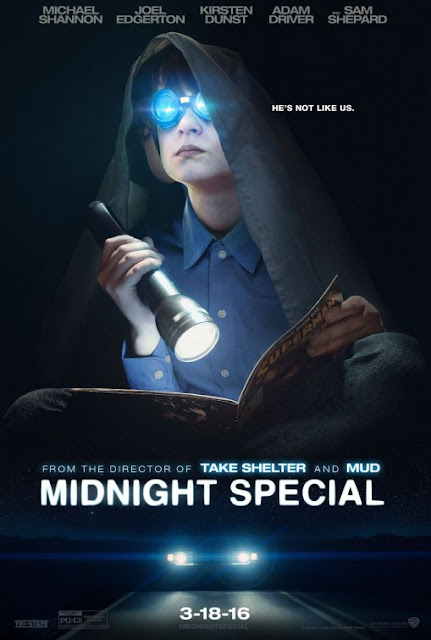 Midnight Special is the sort of movie that hits the ground running and never looks back. The story begins in media res and from there backstory is doled out in small doses throughout numerous points. Jeff Nichols shows some obvious ingenuity when it comes to concocting a cohesive narrative with this approach; he's well aware that numerous elements of the plot will be foreign to all viewers and require proper explanation. But he's also not willing to sacrifice the thrust of the narrative so he can have an entire shoehorned in scene that overwhelms the audience with answers. Instead, he lets the tale live and breathe, with clarification coming to light when needed while other aspects of the movie remain satisfyingly ambiguous.

If you've come looking for a movie that gives you every little answer about its world and then some, you're likely to leave Midnight Special disappointed. But putting the task of telling its story above forcing world-building into this feature is one of the many aspects of this newest Jeff Nichols motion picture that I found to be truly inspired. Before I go forward, I should clarify what exactly the story of Midnight Special is. Roy (Michael Shannon) is a man with one goal in mind; get his son, Alton Meyer (Jaeden Lieberher) to a set of coordinates on a specific date (May 6th). It may sound like an unusual plan, but Alton isn't exactly a conventional human being himself, carrying the ability to emit a bright light from his eyes that gives other people visions.

With the assistance of Lucas (Joel Edgerton) and the boy's mother, Sarah (Kirsten Dunst), Roy plans to get his son to their destination safely, even with agents of the federal government and a cult (whose base is dubbed The Ranch) hot on their trail. It's a premise that's deceptively simple, one whose elegance allows for Alton to discover the true extent of his powers, sometimes to disastrous results. and for the character dynamics to truly blossom. Among those dynamics is the movie's emotional crux, the relationship between Roy and Alton. Their bond struck me as reminiscent of real-life dynamics between fathers and children with special needs. Just like Alton, children with various forms of special needs are born with certain facets of personality that they didn't choose to have nor have any control over. And again, just like Alton, these youngsters can feel isolated from the world around them (at least, that was how I felt growing up as a kid with Asperger's Syndrome).

Not every child with special needs gets parents that truly understand how to handle or help them, but thankfully, Alton has a father driven solely by his dedication to his boy. Roy and Alton have a kind of bond that doesn't feel like a sugarcoated version of parenthood, instead being executed in a way that emphasizes the struggles they face living with Alton's abilities. It's a smartly written character, to be sure, but I truly don't think it would work half as well if Michael Shannon weren't the one playing Roy. Shannon has made a career out of playing individuals with more tenacity than you can shake a fist at, whether it be the disturbed son of a neighbor in Revolutionary Road, an NYPD detective who hates the massive amount of swearing on television in Premium Rush and as the human incarnation of greed in last years super underrated 99 Homes.

But whereas those three aforementioned people were more antognistic in the films they inhabited, Roy, as said before, is a good-natured human being who wants nothing more than to help his son in anyway possible. Shannon channels the indefatigability that's made him so menacing in other movies into a far more endearing, though no less resolute, figure in Midnight Special and he pulls it off beautifully. Surrounding Shannon are similarly strong turns from Edgerton (whose versatility is legitimately starting to astound me), Dunst (who gets quite a bit more to do than I initially expected) and the always charming Adam Driver.

It' truly s a travesty that Warner Bros. is giving Midnight Special a no-frills subpar theatrical run, as, seeing as how I've fallen head-over-hells for this production, I truly wish it got a theatrical release worthy of its quality. Still, at least this great movie exists and will very likely conjure up a well-deserved cult following in the years to come. Like the best pieces of science-fiction art, Midnight Special deftly merges the fantastical (blue beams poruing out of a kids eyes) with the realistic (the father/son dynamic as well as the mundane Texas environments the characters reside in) in a gob-smackingly engrossing manner.
Posted by Douglas Laman (NerdInTheBasement) at 3:00 PM