Out of Sight Is Another Steven Soderbergh Crime Movie Winner 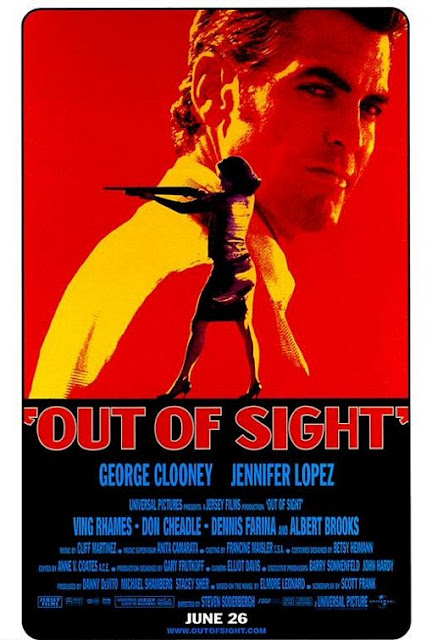 If you’re watching a Steven Soderbergh movie, it’s likely gonna have a burning contempt for the wealthy. That's been an especially notable fixture in his most recent cinematic works, even the one psychological thriller he did in 2018. There also might be heist movie elements, though there are plenty of titles in his filmography (like Contagion) devoid of influences of that genre. Still, there are a number of entries in Soderbergh’s canon that do manage to combine those two central thematic elements, with one such example being his 1997 motion picture Out of Sight.


Based on a novel by Elmore Leonard, Out of Sight is a frequently non-linear tale about a bank robber named Jake Foley (George Clooney). As the film starts, he's been incarcerated for a bank robbery that went awry. Now stuck in prison once again, he eventually gets out thanks to a delicately-executed plan with his formerly incarcerated pal Buddy Bragg (Ving Rhames). A seemingly surefire routine gets complicated since FBI agent Karen Sisco (Jennifer Lopez) has gotten embroiled in their escape plan. Now stuck in the trunk of their car with Foley, she and the criminal begin to share a chemistry that's...unexpectedly exciting. Could this FBI agent actually be falling in love with a criminal?

From there, Scott Frank's screenplay explores the backstory of what exactly big plan Jake Foley and Buddy Bragg have in store for the future, one that's informed by the information they procured during their earlier prison stint. This non-linear story structure echoes a similar writing style found in another late 90's Soderbergh crime movie, The Limey. Out of Sight isn't quite as good as an overall movie as The Limey, mostly because The Limey is a high bar of quality for any movie to surpass, but also because Out of Sight has a slower style of pacing (a homage to 1960's crime movie fare) does occasionally prove to be more of a hindrance than an enhancement to the story.

On the other hand, the script's tendency to just meander and follow little tangents involving side characters is certainly a boon for the overall film given how entertaining the assorted players in Out of Sight are. Perhaps most entertaining of them all is Steve Zahn's Glenn Michaels. Basically, this movies equivalent to Greg from Succession, he's a goofball totally out of his depth in the high-wire scenarios he keeps finding himself ensnared in. This is a personality Zahn portrays exquisitely, especially at any moment requiring Zahn to portray comedic cluelessness. A supporting cast that includes Albert Brooks and Don Cheadle also supplies plenty of fun.

At the very top of that cast is George Clooney and Jennifer Lopez, both of whom have great old-school movie star chemistry together. You could watch these two trade barbs and, eventually, terse romantic dialogue all the livelong day. That scene where it cuts between the two of them sharing pieces of dialogue in a fancy eatery and also the two of them undressing is an especially great use of their erotically charged chemistry. Plus, as a cherry on top, Clooney and Lopez are (HOT TAKE ALERT) easy on the eyes. Out of Sight might be a bit on the slow side at times, but it's still got plenty of that awesome Steven Soderbergh crime movie entertainment we've all come to know and love.
Posted by Douglas Laman (NerdInTheBasement) at 12:44 PM