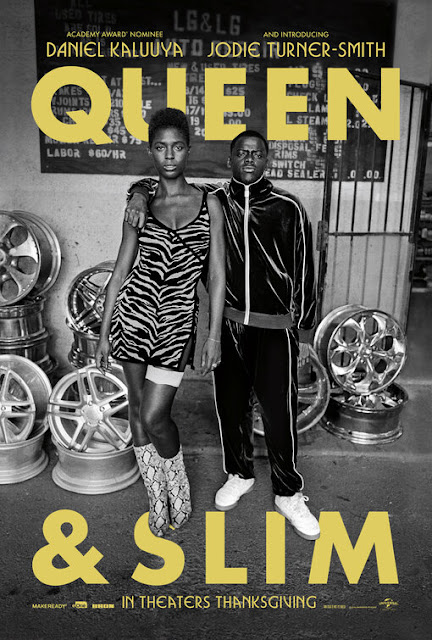 Though it eventually sprawls out into becoming a movie following two people evading law enforcement across multiple state lines, Queen & Slim starts out under extremely mundane circumstances. Angela (Jodie Turner-Smith) and Ernest (Daniel Kaluuya) are sharing a first-date dinner together at a diner. It's not going ideally, their conversations keep going nowhere, perhaps because their personalities couldn't be more polar opposite. Angela is a defense attorney determined to always stand up for something as small as a miscooked order of eggs while Ernest is a soft-spoken go-with-the-flow Costco cashier. Sparks don't exactly fly between the two of them.


But they're about to spend a lot more time together once an unforeseen event transpires during their drive home from the date. Getting pulled over by an extremely agitated white cop, Ernest ends up shooting the officer in self-defense. In a state of panic, and at the urging of Angela who knows what happens to Black people under the American justice system, the two flee and begin to make their way from one destination to the next in an effort to evade capture. Though they're on the run from the law, Queen & Slim doesn't actually resemble a typical movie (like, say, the Bourne movies) about people trying to elude American government forces.

Those conventional films occupy themselves with pervasive action scenes to portray a lead character on the run from powerful figures. The plight of the lead characters in Queen & Sim, though, takes a much more intimate turn. In fact, the movie it reminded me most wasn't any prior feature films about Bonnie & Clyde (Queen & Slim only bears a passing resemblance to that real-life crime duo, by the by) but Ryan Coogler's Fruitvale Station. Both Fruitvale and Queen & Slim are all about emphasizing the humanity of people of color persecuted by corrupt and racist systemic American institutions by taking the time to show such individuals are just human beings living their lives.

On the run and forced to leave their home lives behind, Queen & Slim dedicates screentime to quiet scenes of Ernest riding a horse for the first time or both lead characters enjoying the pleasures of leaning out a car window while the vehicle is going oh so fast. Lena Waithe's screenplay is all about the little moments between its lead characters, the ones that emphasize the kind of humanity so often erased in the real-world when people try to justify the murder of the likes of Trayvon Martin. This exploration of the humanity of its characters leads to some fascinating details scattered throughout Queen & Slim, including the recurring feature of Black characters only being able to find personal salvation within interior environments.

Interior spaces being a place where the racially disenfranchised can be themselves freely is also smartly reflected in the script by the frequent use of voice-over narration to express the internal desires of the characters. Merely speaking aloud about their own wishes is so dangerous that only through voice-over can Angela, for instance, express what she wants most in a lover. What a beautiful and poetic way of simultaneously capturing what these characters want and subtly reinforcing the constant danger they live in. The only real complaint I can lob at Waithe's script is that it does tend to run a bit long, though even that foible does feel fitting for a movie all about chronicling everyday interactions that tend to never adhere to traditional rules of pacing in the real-world.

Waithe's screenplay is brought to life superbly under the skillful hand of director Malinas Matsoukas, who makes her feature-film directorial debut here after impressing with her directorial work on music videos for songs like Formation. There's lots to appreciate in Matsoukas' work behind the camera on Queen & Slim, but it's especially impressive how she isn't afraid to embrace bold brightly colored visual sensibilities. This may be a serious drama but this doesn't mean everything has to be devoid of vibrancy. This is most apparently seen in the costumes the two lead characters adorn while on the lam, the turquoise color of the car Angela & Ernest ride around in and even soothing lighting meant to signify how certain locations (namely a honky-tonk tavern) are places of safety for our protagonists.

The sterling directorial work from Matsoukas also extends to her ability to get strong performances out of the two lead actors in Queen & Slim. One of those two is Daniel Kaluuya, who's really come into his own as a truly remarkable actor over the last three years and continues his winning streak here with his authentically vulnerable portrayal of Ernest. The way Kaluuya delivers a line where Ernest nonchalantly says that he's a guy who "..will never bend the world" is alone an impressive showcase of his talents as a performer. In one line reading, you see how this character views himself, how he's not just resigned himself to it but has become comfortable with this perception, and so much more. Jodie Turner-Smith makes a great counterpoint to that Daniel Kaluuya performance with her performance that's just immersed in conviction. Like Kaluuya, she also knows how to imbue subtle layers of details into the most throwaway aspects of her performance. Both Kaluuya and Turner-Smith's work in Queen & Slim also shares the common achievement of making their character's initial personalities so immediately distinct while being able to also believably depict both Ernest and Angela growing as the story progresses. In their fascinating lead turns, both actors capture the level of quality and humanity found in abundance in Queen & Slim.
Posted by Douglas Laman (NerdInTheBasement) at 6:13 PM