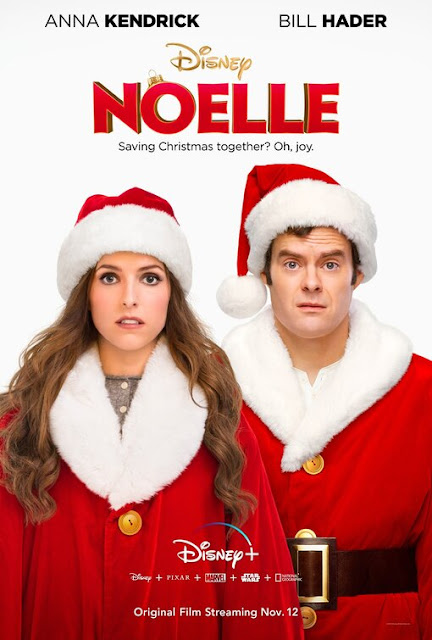 SPOILERS FOR NOELLE AHEAD

There's a really interesting idea for a Yuletide family movie nestled within Noelle, one of the first original films made for the Disney+ streaming platform (it was once set for a November 2019 theatrical release). But much like a Christmas present tucked away at the very back of the tree, it remains out of grasp of writer/director Marc Lawrence. Well, mostly out of grasp I should say. There is a stretch of the third act where Noelle actually manages to hit upon something special and unique. Unfortunately, too much of it settles for being derivative, a hodgepodge mixture of Elf, The Year Without A Santa Claus and Arthur Christmas.


The similarities to those titles become apparent once the central plot of Noelle gets sketched out. Noelle Kringle (Anna Kendrick) and Nick Kringle (Bill Hader) are the children of Santa Claus and the latter is preparing to take over the Santa mantle. Unfortunately, Nick just isn't getting into the whole Santa gig, he's claustrophobic going down chimneys, he's not good with kids, being Santa just isn't something that comes naturally to me. Noticing he's stressed out about his impending duties, Noelle suggests Nick get away from the North Pole to somewhere sunny for the weekend. Nick takes this advice too much to heart and ends up disappearing, leaving technology-fixated Cousin Gabe (Billy Eichner) to take over the Santa mantle.

Noelle, with elf housekeeper Polly (Shirley Maclaine) in tow, now must head down to Phoenix, Arizona to retrieve her brother. Once Noelle has to interact with the real world for the first time, the similarities to Elf begin to get shockingly apparent. A gag involving Noelle mistakenly eating sunscreen is so similar to Buddy the Elf inadvertently swallowing Passion Fruit Spray perfume that you wonder if Jon Favreau and company should hire some lawyers for a lawsuit. Too much of Noelle's runtime is dedicated to cookie-cutter gags and storylines that even the filmmakers don't have much passion for.

Cousin Gabe's reign over the North Pole, for example, is executed with a shocking lack of urgency, it's just a bunch of limply delivered dialogue full of product placement that is far too reminiscent of previous kids movies, like The Santa Clause 2, about the North Pole being thrown into chaos by new leaders. Even the presence of types of characters you don't see in your average Disney film, including Noelle encountering a young girl whose hearing-impaired, doesn't add much since Marc Lawrence's script doesn't allow these individuals to become fully-fleshed out human beings. Yes, much of Noelle is quite surface-level and forgettable...and then it stumbles onto a plotline that should have been the central hook of the whole project.

Eventually, Noelle is the one chosen to be the new Santa. While climbing onto her sleigh for the first time, she remarks something quite insightful to Polly: "I'm worried some kid is gonna look at me and say 'You're not Santa'". Why has the runtime of Noelle up to this point been so reliant on iPad name-drops and not focused exclusively on this? It's a specifically-defined plot element that echoes Spider-Man: Into the Spider-Verse in a good way, a contemplation of how an unexpected person deals with inheriting a famous mantle. That's a unique angle for a Christmas family movie and one that informs the best scenes of Noelle.

A subsequent scene of Noelle visiting a group of homeless kids who proceed to thank her and call her Santa is shockingly poignant. This and other moments exploring Noelle trying to adjust to the Santa job mantel are great examples of Noelle finally creating its own memorable elements instead of leaning so hard on the past. You have to wad through plenty of forgettable derivative family movie material to get to this part of the movie. Luckily, there's at least some lovely-looking costume design and a cast headlined by Anna Kendrick & Bill Hader admirably refusing to sleep-walk through this material that's around to provide infrequent bursts of amusement. As an overall movie, Noelle is passable and painless but the very best parts of its final half-hour frustrate in showing just how good and unique this project could have been.