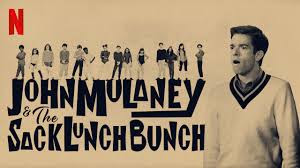 You're gonna know right away if the specific style of humor of John Mulaney & The Sack Lunch Bunch is going to be for you or not. This is a satire of classic children's variety specials hosted by John Mulaney and a large collection of children that's broken up into an assortment of comedic musical numbers, off-the-wall gags skewering hallmarks of children's television (like those "Can You Guess What The Image Is?" puzzles) and a couple of celebrity cameos. Much of the humor seems designed to leave some viewers more baffled than amused and that's totally fine. All art is subjective but that's especially true when it comes to comedy.


For me, though, this kind of humor was right up my alley. In fact, John Mulaney & The Sack Lunch Bunch was seemingly made just for my sensibilities. After all, I love Mulaney's comedic shenanigans (so long as they don't emerge in the form of a FOX sitcom), I love musicals and I'm also a big fan of a number of the guest stars that show up here like Richard King and Jake Gyllenhaal. Director Rhys Thomas takes all these promising elements and manages to execute them in a delightful manner. Partially this is due to the special never taking a toxically mean-spirited gaze towards children's television programs that clearly inspired it like Sesame Street, Barney or Reading Rainbow.

While The Sack Lunch Bunch has no problem lampooning recurring elements of such programs, it's also not here to simply sling mud at the pop culture properties that inspired it. Instead, it focuses its creative efforts on using the format of a children's television show as a springboard for creating its own original comedic material, including a bevy of catchy musical numbers. Such tunes reminded me of the works of Rachel Bloom or The Lonely Island in how they're songs with plenty of comedy that don't forego solid lyrical structure or actually good vocals. Who says you can't have both quality and hilarity when it comes to crafting songs like Plain Plate of Noodles?

Also helping matters is the production and costume design, as well as even the appearance of on-screen graphics, that feels totally authentic to the kind of shows that inspired The Sack Lunch Bunch in the first place. John Mulaney's presence here as a host similarly feels ripped straight out of classic children's television. Mulaney's whole demeanor, from his soothing personality to his calm vocal cadence, feels like it would be right at home in a straightforward take on this material. The fact that The Sack Lunch Bunch is this convincing on a visual and performance level isn't just impressive on a technical level, it also aids the comedy of the entire production.

The Sack Lunch Bunch can constantly lull viewers into a sense of complacency in knowing just what to expect from a children's show before hysterically upending expectations with sudden bursts of dark and/or absurdist comedy. An extended sequence focused on costumed character Googy (a Barney riff) is an especially good example of children;'s television normalcy transitioning into dark comedy nirvana. John Mulaney and the Sack Lunch Bunch's specific style of humor probably won't resonate for everybody but I found it downright delightful in addition to being the birthplace of songs I'll struggle to get out of my head over the next few weeks. If you like John Mulaney's comedy, specifically-detailed pop culture spoofs or Jake Gyllenhaal in wackadoodle mode, then John Mulaney and the Sack Lunch Bunch is for you!
Posted by Douglas Laman (NerdInTheBasement) at 8:32 PM