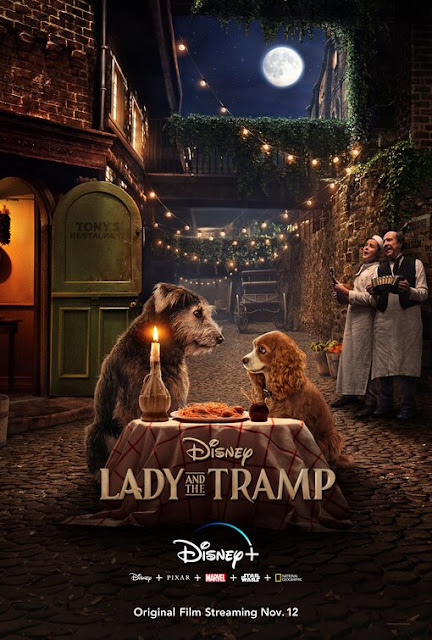 You didn't think 2019 would close out without one more live-action remake of a classic animated Disney movie? The fifth one of these in 2019 arrives in the form of Lady and the Tramp, which also serves as one of the first original films on Disney's new streaming platform Disney+. This newest remake also serves as a throwback title for Disney, one that harkens back to their more traditional family films like Homeward Bound and Beverly Hills Chihuahua rather than the mega-budget live-action remakes that define modern-day Disney family entertainment. That's not inherently a good or bad thing, but it does give one an idea of what kind of original movies we can expect Disney+ to deliver in the coming years.


If you've seen the original 1955 animated version of Lady and the Tramp, then you know the basic outline for this remake. In the early 20th-century, Lady (Tessa Thompson) is a pampered doggie living with a loving couple (Kiersey Clemons and Thomas Mann). When a new baby arrives into the family, though, Lady is no longer the center of attention in the household. Now feeling ignored by her owners, Lady ends up being kicked out of her home and running into stray dog Tramp (Justin Theroux). Together, the oddball pair begin to get into some antics that let Lady see what it's like to live life unleashed while Tramp begins to discover that living for somebody else isn't the worst thing in the world.

The best thing about Lady and the Tramp is that the script, penned by Kari Granlund and Support the Girls director Andrew Bujalski, isn't straining to be hip. The original period era-setting is maintained and there's a welcome lack of bathroom humor and modern-day pop culture references that populate so many kids movies. It's also a noticeable improvement over live-action Disney remakes in how, aside from Tramp getting a "tragic" backstory lifted from A.I.: Artifical Intelligence, it doesn't bend over backward to explain the backstory of everything from the original animated movie. We don't get prolonged screentime dedicated to explaining how Lady got her name, a welcome relief after Bill Condon's Beauty and the Beast gave Gaston a backstory.

Director Charlie Bean's take on Lady and the Tramp is very much a traditional family movie, for better and for worse. This means it doesn't grate on your nerves with its attempts to be cool and it remains mostly inoffensive while you're watching it. The most memorable parts of the production turn out to be Colleen Attwood's lovely costume design work and the surprisingly lively vocal performances from Tessa Thompson and Justin Theroux. Thompson's first foray into feature-film voice acting see's her lending an endearing personality to her voicework as Lady while Theroux, already a hoot in his voicework in Bean's previous feature The LEGO Ninjago Movie, captures the personality of a loveable rapscallion in his own vocal work.

While Thompson and Theroux are enjoyable enough in their voicework, the subpar CGI used to move the mouths of their characters and the other dogs is distracting enough that it got me wondering if the movie would have been better off just having the dogs not speak at all. The adorable live-action pooches are already so expressive enough with their own natural facial expressions, we don't need lackluster VFX work to undercut that. Speaking of distracting CGI, a climax where CGI Tramp engages in a duel with a CGI rat had me wondering what the point of a live-action remake of this particular Disney title is if it's just gonna boil down to a nearly fully-animated finale. It's almost like these stories are inherently better suited to fully-animated confines.

While the voicework and CGI elements represent the best and worst, respectively, parts of Lady and the Tramp, much of the movie settles for being painless but forgettable. This is especially true of the scenes dedicated to replicating iconic scenes from the original movie, namely the Siamese Cat, Bella Notte and He's a Tramp musical numbers. It's a relief to report that the former sequence is significantly less racist now, but the modern versions of both scenes are clumsily incorporated into the story as the only musical numbers in a non-musical movie. To boot, they're executed with such a lack of vision or flair that they just feel like they're around to appease fans of the original. It's hollow fan-service that has nothing to say about the source material beyond reminding you that it exists and that you should probably watch that next on Disney+.

The same level of painfully obvious obligation informs the handling of sidekicks Trust (Sam Elliot) and Jock (Ashley Jensen). Their prominent presence in the climactic dog catcher chase scene is especially humorous given how they've barley participated in the film up to this point. While Lady and the Tramp is yet another example of Disney simply regurgitating its animated past in a mechanical live-action form, at least this one has the decency to have some virtues to speak of unlike The Lion King or Dumbo. For one thing, its actually colorful in its production design & costumes, the vocal performances are uniformly solid, the banter between the two titular lead characters is actually decent and you get to hear both Janelle Monae and Kiersey Clemons sing, which is never ever a bad thing. Lady and the Tramp is mostly painless family fare but its worst qualities also happen to exemplify the worst qualities of the current live-action Disney remake trend.
Posted by Douglas Laman (NerdInTheBasement) at 9:22 AM