Dead or Alive Begins and Ends With A Bang...Literally 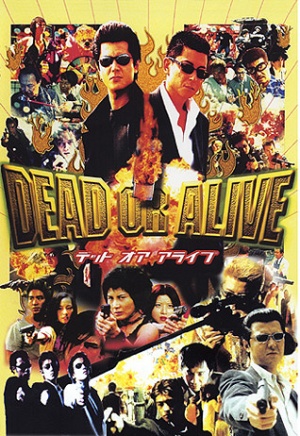 Takashi Miike's Dead or Alive certainly begins with a bang, doesn't it? That iconic opening sequence is like the love-child of Edgar Wright & the Safdie Brothers on a hundred Red Bull's and also a healthy dose of bath salts. Said opening sequence depicts a bevy of human beings being taken out in violent ways by a group of criminals. The editing used to cut between individual locations is Road Runner-fast and none of the deaths are subtle. Noodles explode from one dying person's body instead of blood and the presence of drugs and sex is similarly pervasive in this stretch of bravura filmmaking. To watch this opening scene of Dead or Alive is to feel like you've just gone on the world's faster rollercoaster, your head is spinning, your mind is in shambles yet you kind of want to do it again?


Once that's out of the way, we begin to get some greater context for what the hell is happening. Dead or Alive turns out to be about two people from opposite sides of the societal tracks. One of these leads is Detective Jojima (Show Aikawa), a guy dedicated to upholding law & order who struggles to connect with the members of his nuclear family. On the other side of the equation, we've got criminal kingpin Ryuuichi (Riki Takeuchi). He may break rules, but he's close to his various criminal compatriots. It's a cat-and-mouse game between these two as Jojima tries to bring Ryuuichi and associates to justice while also keeping his family intact.

These opposing character dynamics make up the foundation for Ichiro Ryu's script for Dead or Alive, which manages to explore a number of key themes (the rootless individual, the pursuit of happiness, a search for family, etc.) that pop up all throughout Takashi Miike's work. Much like its own opening scene, there's always a lot happening in Dead or Alive, one can never accuse it of just resting on its laurels with the predictable. What other movie would depict a graveyard as some kind of foggy beach, let alone have that uniquely rendered environment be the backdrop for a light-hearted half-naked romp between Ryuuichi and his criminal pals?

That having been said, while it doesn't lack for unique ideas, Dead or Alive's execution of those ideas does tend to be erratically successful, especially in terms of the camerawork used to realize the project. After a rapid-fire opening with camerawork that placed you right in the middle of all the debauchery, Dead or Alive subsequently opts predominantly for wide shots that place a great deal of distance between the viewer and the characters. It's a filmmaking technique that's more reminiscent of Joanna Hogg's camerawork in The Souvenir rather than a crime movie. Unlike that excellent 2019 feature film,  though, such spacious visual choices don't help reinforce the specific themes of Dead or Alive.

While it's a bold visual choice, as executed here, it ends up sucking some of the energy out of the middle portion of the movie. This static visual choice compounds problems found in the middle section of Ryu's script, chief among those issues being that Dead or Alive briefly turns into a generic crime movie. This genericness can be chalked up to the formulaic drama befalling the primary characters, especially Jojima. These individuals just work better as figures navigating unexpected madness rather than as sources of compelling drama. Even in its weakest moments, though, there are aspects of Dead or Alive that manage to evoke their own unique personality, especially Riki Takeuchi's performance as Ryuuichi. Takeuchi works wonders with exuding the moral complexity of this character, his dedication to his fellow criminals is rendered with equal levels of authenticity as the times where he's gotta be a cool as a cucumber killer.

Luckily for Dead or Alive, the whole endeavor manages to come alive once again just in time for the climax when a crestfallen Jojima, with nothing else lest to lose, confronts Ryuuichi and his henchman for one final showdown. Whatever you predict is gonna happen in this climax, you can't possibly imagine the delightfully unhinged mayhem that follows. For five minutes, director Takashi Miike masterfully channels the nonsensical chaos found in that Calvin & Hobbes T-Rex in F-14's comic. It's beautiful. Dead or Alive gets lost in the weeds more than once, but the opening and closing sequences are such wonderfully-realized slices of boldly-crafted gonzo cinema that they alone make the movie worth watching.
Posted by Douglas Laman (NerdInTheBasement) at 9:28 AM