It's Remarkable That For Sama Exists But Thank Goodness It Does 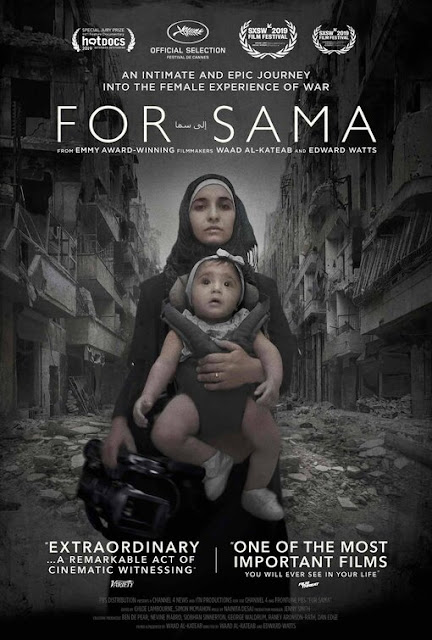 You know how sometimes you see movies execute some wondrous feat with practical visual effects and you ponder "Wow, how did they pull that off?" That same sense of awe in pondering how a cinematic feat was accomplished defines For Sama, a documentary hailing from directors Waad Al-Kateab and Edward Watts comprised of footage I honestly can't believe was captured on film. This feature is all about the experiences of living in the middle of a wartime scenario in real-time as captured by Waad Al-Kateab's camcorder. At times, bombs go off around Al-Kateab, yet the footage keeps rolling. She knows the urgency of what she's recording. She knows that to create art about oppressed people is to create permanent reminders that they existed.


The footage in For Sama begins in an intimate fashion, with Waad Al-Kateab in college in Aleppo, Syria. It's here that she stumbles, accidentally, on her fellow college students painting a mural dedicated to criticizing local corrupt leaders. Through filming things in an off-the-cuff manner in this introductory sequence and through the rest of the movie, we're placed into the perspective of Waad Al-Kateab so easily. Her knowledge of this local resentment grows in tandem with the viewer's knowledge while her persistent camerawork plops the viewer directly into the middle of protests that are usually broken up by violent police forces. For Sama's filmmaking, done simply to make sure there's video documentation of the horrors being perpetrated against Waad al-Kateab and her neighbors, is more immersive than any 3D movie could ever hope to be.

In the middle of all this fighting and chaos, love blossoms between Waad Al-Kateab and doctor Hamza Al-Kateab. The intimate nature of the camerawork is reflected in how footage of the two characters getting married feel like raw unpolished wedding videos anyone might have. There's no attempt to give this footage a glossy professional appearance and that's for the best. For Sama's best attribute is how it captures the feeling of events being miraculously captured just as they transpire. The more mundane camerawork used to capture the crucial wedding sequences mirrors that beautifully while conveying more hopeful emotion than much of the rest of this predominately and appropriately harrowing production.

After that wedding, the titular character of For Sama emerges in the form of Waad Al-Kateab's daughter. The very act of having a child in these conditions is like a subtle form of protest against powerful forces against enemy wartime forces. Such entities want to wipe Waad Al-Kateab and her neighbors off the face of the planet, they want to make it like they never even existed in the first place. Through the birth of Sama and the direction of this documentary, Waad Al-Kateab is fighting back against that idea. Life will continue to go on, life will have proof it was here. Rebellion against oppression can take many forms, including through the act of motherhood and through filmmaking.

There's grander importance to Sama being born in this era of Aleppo's history, but For Sama never forgets to keep itself focused on just the small-scale relationships between Waad Al-Kateab and her loved ones. Footage depicting these dynamics make up the majority of For Sama and has been edited together by the duo Chloe Lambourne and Simon McMahon. Given that so much of the footage, understandably, has the feel of being captured without any thought of it fitting into the context of a larger motion picture, it's astonishing how Lambourne and McMahon make sure that everything flows together well in their editing.

Though there's a fascinating impromptu nature to the way For Sama captures much of its footage, the editing is anything but amateurish and the same can be said for the way Waad Al-Kateab and Edward Watts have brought this production together as directors. What started out as just camcorder footage of a mural on Waad Al-Kateab's college campus has become something far greater than that. Far Soma is a documentary that serves as a cinematic ode to human beings showing unswerving perseverance in the face of atrocities. It's truly remarkable that Waad Al-Kateab was able to capture the footage that comprises For Sama. We'll all be left wondering for years to come how she was able to pull that off, but what is certain right now is that her documentary For Sama is outstanding.